Climate alarmists claim that if we allow the planet to warm even 2ºC (3.6ºF), then all hell will break loose. But for most of the history of Planet Earth, the temperature has been much warmer than that. Let’s look at a time in Earth’s history during the Eocene climatic optimum, 50-to 33 million years ago, when the average global temperature is estimated to have been at least 10ºC (18ºF) higher than the current average; atmospheric carbon dioxide levels are estimated to have been about 3,000 ppm, about eight times higher than now; and sea level was about 200 feet higher because for much of the time, there was little or no ice at the poles. Even with up to 3,000ppm carbon dioxide in the atmosphere, the oceans never became acidic, although the pH was slightly lower than it is now. These estimates are based on geologic evidence such as fossils, sedimentation types and rates, and isotope studies.

Science writer Paul MacRae says: “Curiously, while alarmists warn about the horrors of returning to the climate of millions of years ago, paleoclimatologists tell a different story. They more often see our earlier planet as a ‘paradise,’ even ‘paradise lost.’” 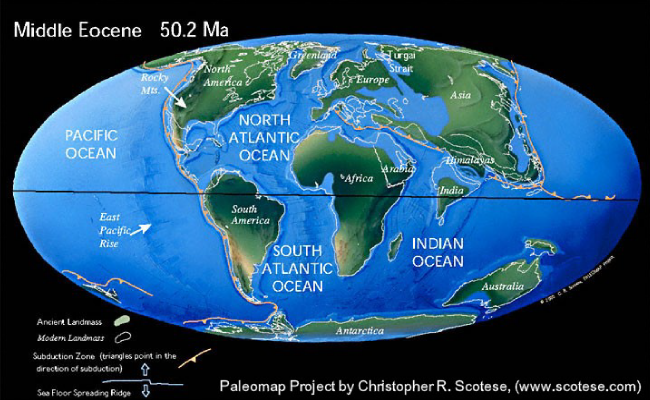 During the Eocene climatic optimum, the planet was “verdant and productive,” covered with luxuriant vegetation. MacRae notes that even prominent climate alarmist, Tim Flannery, says in his book, The Eternal Frontier, that North America was a tropical paradise.

Sara Stein describes the Eocene ( in The Evolution Book): “The world that all the little brown furry things inherited from the dinosaurs was paradise. The climate was so mild that redwoods, unable now to live much further north than California’s pleasant coast, grew in Alaska, Greenland, Sweden, and Siberia. There was no ice in the Arctic. Palm trees grew as far north as 50 degrees latitude, roughly the boundary between the United States and Canada. Below that subtropical zone—that was similar to Florida’s landscape today—was a broad band of tropical rain forest.”

The “little brown furry things” refers to the fact that modern mammal species arose during the Eocene.

Although some climate alarmists insist that a warmer world will be plagued by droughts and deserts, the Earth in the Eocene was a much wetter world, which supported tropical vegetation. Isotope studies suggest that the warm Eocene had a “balanced, subtropical hydrologic cycle and wetter mid-high latitudes” and tropics with “substantially decreased evaporation and increased precipitation” compared to current conditions. And “even though the Eocene was undeniably hotter than today’s climate, the tropics were probably not as warm as previously thought. That, plus a stable but enhanced hydrologic cycle, made Earth a more congenial planet to live on.”

Alas, paradise was not to last. Toward the end of the Eocene, the continents of South America and Australia had separated sufficiently from Antarctica to provide a deep water connection between the Pacific and Atlantic Oceans which changed circulation patterns and hence climate. Celestial mechanics and our solar system’s position in the galaxy were also working against paradise (see: Ice Ages and Glacial Epochs) and Earth began its long, slow plunge into another Ice Age, making the current average global temperatures the coldest in nearly 300 million years.

Return to a warmer wetter planet really doesn’t sound as catastrophic as some make it out to be, especially compared to the rigors of a glacial epoch. While it is true that we would have a different world if we were as warm as the Eocene, it would actually be more friendly toward life. The specter of dangerous global warming is just a bogeyman.

“The whole aim of practical politics is to keep the populace alarmed (and hence clamorous to be led to safety) by menacing it with an endless series of hobgoblins, all of them imaginary.” – H. L. Mencken

P.S. Back in 1988, NASA “climate scientist” James Hansen predicted that global temperatures would increase by 2 to 5 degrees Fahrenheit, within 30 years, if human CO2 fossil fuel use continued to increase by 1.5% per year. Well, fossil fuel use increased annually by 2.5% since 1988. During 1988 the average U.S. temperature was 52.6°F. And for 2013, 25 years later? The mean U.S. temperature was 52.4°F. Looks like the climate bogeyman has not been doing his job.