Droughts have always been part of natural variation. History of drought in the U.S. is summarized in a study by Columbia University. The graph below illustrates their results. 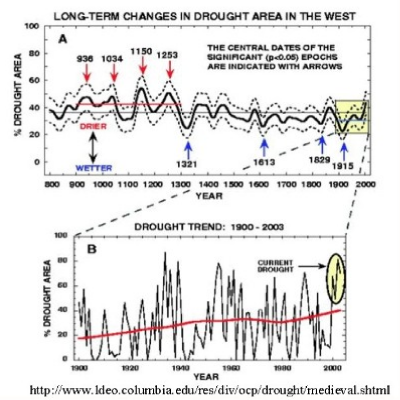 The cyclic nature of droughts shows that the current one is neither unprecedented nor unusual. The data show that Obama’s contention, that the current drought is the result of man-made global warming, has no factual support.

The current shortage of water to the agricultural regions of California is due in large part to political policy rather than Nature.

California had built a system of reservoirs and aqueducts, beginning 60 years ago, to take water from the relatively wet north to the dryer agricultural areas in the south. The system was designed to weather a 5-year drought, but California policy has prevented building new reservoirs in the last 30 years.

Also, the system didn’t anticipate the Endangered Species Act. “Environmental special interests managed to dismantle the system by diverting water meant for farms to pet projects, such as saving delta smelt, a baitfish. That move forced the flushing of 3 million acre-feet of water originally slated for the Central Valley into the ocean over the past five years.” (IBD)

A similar, but less intense, situation is occurring along the Colorado River system. Due to pressure from environmentalists, the Bureau of Reclamation periodically performs high-flow water releases from the reservoirs to flush the river. That water is essentially lost to use for irrigation, power generation, and drinking supply. But green guilt is assuaged, the river becomes more environmentally correct for a short period.