The IPCC (Intergovernmental Panel on Climate Change) has now published five major reports. None of these reports present any physical evidence that carbon dioxide has a significant effect on global temperature. All the IPCC claims and prognostications are based on a theoretical property of carbon dioxide and computer simulations. The results of computer model simulations have greatly diverged from observations of the real world. And as physicist Richard Feynman points out “… if your prediction is wrong then your hypothesis is wrong. Period.”

Patrick Moore, co-founder of Geenpeace, has some observations that many climate alarmists seem to ignore:

1. The concentration of CO2 in the global atmosphere is lower today, even including human emissions, than it has been during most of the existence of life on Earth.

2. The global climate has been much warmer than it is today during most of the existence of life on Earth. Today we are in an interglacial period of the Pleistocene Ice Age that began 2.5 million years ago and has not ended.

3. There was an Ice Age 450 million years ago when CO2 was about 10 times higher than it is today. 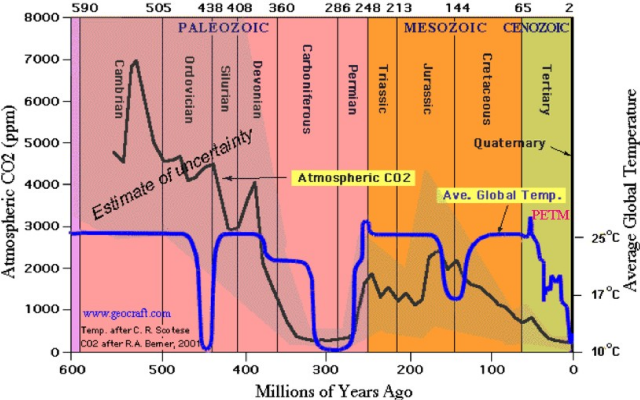 4. Humans evolved in the tropics near the equator. We are a tropical species and can only survive in colder climates due to fire, clothing and shelter.

5. CO2 is the most important food for all life on earth. All green plants use CO2 to produce the sugars that provide energy for their growth and our growth. Without CO2 in the atmosphere carbon-based life could never have evolved.

6. The optimum CO2 level for most plants is about 1600 parts per million, four times higher than the level today. This is why greenhouse growers purposely inject the CO2-rich exhaust from their gas and wood-fired heaters into the greenhouse, resulting in a 40-80 percent increase in growth.

7. If human emissions of CO2 do end up causing significant warming (which is not certain) it may be possible to grow food crops in northern Canada and Russia, vast areas that are now too cold for agriculture.

9. There has been no further global warming for nearly 18 years during which time about 25 percent of all the CO2 ever emitted by humans has been added to the atmosphere. How long will it remain flat and will it next go up or back down? Now we are out of the realm of facts and back into the game of predictions. (Full article)

“Climate alarmists have labeled carbon dioxide produced by carbon fuels as a ‘pollutant’ and the US Supreme Court even declared it to be so. But that ignores the simple truth that more carbon dioxide concentration exists in the lungs of every animal on earth (4%) than in the air (0.04%); it is an ingredient in beer, bread and champagne; it is essential nutrition for all plant life on earth; and this plant life supports all animal life – hardly a pollutant.” –Viv Forbes

Carbon dioxide is a phantom menace. All our attempts to limit carbon dioxide emissions will have no discernable effect on climate, but will have great detrimental effects on our economy, standard of living, and our security.

The only danger we face from carbon dioxide is the politics.