By government decree, June 15 marks the official start of Arizona’s monsoon, the seasonal shift in wind patterns that brings much-needed rain to the desert. Formerly, meteorologists marked the beginning of the monsoon season when we experienced three consecutive days with a 24-hour average dew point of at least 54 degrees. In Tucson, the average start is July 5; the earliest start was June 24 (1967); the latest start was July 25 (1987) and the average end is September 15. During the monsoon, average rainfall in Tucson is 5.46″. The wettest monsoon delivered 13.49″ in 1964 and the driest produced only 1.24″ in 1924. Let’s hope that this year is on the wet side.

During the monsoon, rain often comes from violent thunderstorms. The term “monsoon” does not refer to the thunderstorms themselves, but to the seasonal shift in wind patterns of at least 120 degrees.

For most of the year, prevailing winds from the west bring in air that has been depleted of moisture as it traveled over mountain ranges. But during late spring and early summer, the subtropical high pressure ridge that normally sits over northern Mexico and the Gulf of Mexico, expands westward and northward across the southern US. This pushes the prevailing westerly winds north and shifts the middle to upper wind pattern so that it blows from the southeast. These southeasterly winds pick up moisture from the Gulf of Mexico and Gulf of California.

Monsoon thunderstorms develop initially over mountains as intense surface heating and orographic uplift  cause the moisture-laden air to rise. Tucson gets about three times as many thunderstorms as Phoenix because of Tucson’s higher elevation and proximity to the moisture source. Typically, thunderstorms travel from east-southeast toward the west-northwest. Because the storms are convective in nature, the rain is usually preceded by very strong downdrafts blowing dust.

The effect of the monsoon on desert life is dramatic. Ocotillos, which look like dead sticks most of the year, become covered with leaves, usually within 48 hours of a good rain. Shriveled cactus become plump with imbibed water. A large saguaro can absorb 150 gallons of water in a day or two and double its weight.

The rains produce ephemeral pools which gather wind-blown dust, algae, fungi, bacteria, single-celled organisms and detritus from prior seasons, all of which support animal life. Some animals, such as the branchiopods (shrimps, water fleas) and snails, mites and nematodes spend their entire life cycle in these pools. Other animals, mainly amphibians (spadefoot toads and salamanders) use the pools to breed. The branchiopods, tadpole and fairy shrimps, are ancient life forms, first recognized from Cambrian rocks 500 million years old. Fossils of one species identical to contemporary animals are 200 million years old. They have survived because they can tolerate extreme conditions. Dry eggs can hatch withing seven hours of hydration and reach sexual maturity in three weeks. Adults are tolerant of high temperature and hypersalinity. In one experiment, eggs were attached to the outside of a space capsule, survived blast off, the freezing temperatures of space and the heat of re-entry and then were hydrated and hatched.

Monsoon thunderstorms have a particular anatomy as shown by the graphic below: 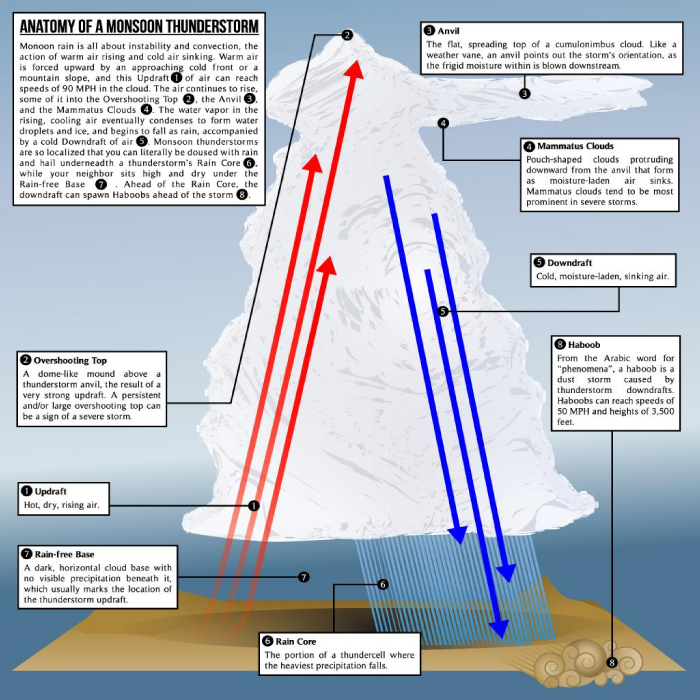 The first stage of thunderstorm development is the updraft where warm, moist air is lifted by columns of hot air rising in desert valleys or by air passing over a mountain range. This uplift causes water to condense to form cumulus clouds. Falling water droplets pull the air down with them to form the downdraft and rainy part of the storm. The strong downdraft causes a dust cloud, the haboob, in front of the storm. Frequently dust devils dance in front of the Haboob. A massive haboob swallowed Phoenix in 2011 (see this article). As the storm progresses, the downdraft can produce destructive microbursts of high wind. A “gustnado” is a tornado-like vortex, similar to dust devils, but stronger, that appear to develop on the ground and extend several hundred feet upward. These vortices generally develop along the leading edge of an outflow boundary from a thunderstorm cell. Although generally of limited duration, the winds of gustnadoes can be strong enough to cause damage.

Some safety tips about lightning:

Lightning often strikes outside of heavy rain and may occur as far as 10 miles away from any rainfall. As a rule of thumb, if the time between lightning flash and thunder is 30 seconds or less, the lightning is about 6 miles away. Research has shown that the most successive flashes are within 6 miles of the first one, which means that you should have reached a safe place if lightning is less than 6 miles away.

If possible stay indoors or in an automobile. If outside, avoid isolated tall structures such as trees and power poles. Get off and away from open water. Avoid open metal vehicles such as tractors, farm equipment, motorcycles, and golf carts. Avoid power lines, wire fences, metal pipes and railings. If you are caught in an open area far from shelter, and you feel your hair stand on end, lightning may be about to strike you. Drop to your knees and bend forward putting your hands on your knees. DO NOT lie flat on the ground, that makes you a bigger target and a better conductor of electricity. Stay away from running water inside the house; avoid washing your hands or taking a bath or shower. Electricity from lightning has been known to come inside through plumbing. When inside, stay away from TV sets, electrical appliances, bathtubs and sinks, do not talk on the telephone, or play on the computer, don’t touch an electrical cord or outlet.

Be aware and be safe.