PHOENIX – Winter officially does not begin for 82 days, but employees at one Arizona ski resort woke Thursday morning to a fresh dusting of powder.

“We got about two inches overnight and it was still snowing some this morning,” said Tyler Shultz, the head of marketing for Sunrise Park Resort on the eastern edge of the state.

Not everyone thinks of Arizona as a skiing destination. And Arizona skiers would probably prefer to keep it that way. Thousands of them make the trip each season to ski at the state’s resorts, Arizona Snowbowl in Flagstaff, Sunrise Park Resort near Greer and Mount Lemmon Ski Valley outside Tucson.

With winter approaching, Arizona ski resorts and specialty shops have had to shift modes in preparation for what could be another unconventional ski season. New variant strains of COVID have prompted more questions and challenges.

“A year ago at this point we really knew what we were doing as far as our game plan was concerned. This year we are going into it and we don’t really have any idea,” said Rob Linde, the general manager at Snowbowl. “There are lots of considerations. In some respects I think it’s going to be more difficult because of the unknowns.”

That may be the best thing for Snowbowl since Linde has been preaching the importance of being adaptable. With the altering of COVID regulations, sticking to the state mandate has become the easiest way for these niche businesses to stay open.

“We go by the CDC and what the state or county has said,” said Michael Marshall, an employee at Ski Pro in Phoenix. “We just follow whatever we need to to stay open. A couple of us might wear masks once it gets busy again just to be safe.”

Being adaptable and ready for anything will come in hand since the Old Farmer’s Almanac is calling for an abnormally cold winter in 2022. It specifically predicts a cold, dry winter in Arizona’s north country, and a mild, dry winter towards the state’s southern region.

Despite the projection for the upcoming winter, Linde and Jack Kannapel, the owner and founder of Ski Pro, both expect business this year to be at least a bit slower for their respective businesses than last winter, when they said they experienced booming seasons.

“I expect things to be worse now that COVID is better,” Kannapel said. “I can’t imagine business being any better than it was during COVID because people were all focused on going out because they couldn’t go out to dinner or go on vacation where they wanted to.”

While employees at Snowbowl and Ski Pro are expecting the season to be a bit worse than last year, Sunrise is preparing for the opposite. This is more due to the issues that Sunrise faced last year.

“We expect this year to be a better season,” Shultz said. “Us specifically, we had some issues with marketing and some higher level employee turnover just prior to the season starting last year, including our general manager being brand new a month before we opened last year.”

Sunrise once again has a new general manager, hired in August. There is also hope that Sunrise’s snowfall reverts to what it normally is for this season. On average Sunrise gets 250 inches of snow per season, but last year only received 170 inches.

Arizona’s ski resorts tend to start running their lifts for the winter season in mid to late November. This year will likely be no different with Snowbowl set to open Nov. 19, while Sunrise ski passes go on sale Oct. 9, with the intent on starting the season Dec. 3. This means for nearly seven months, from May to November, the resorts need to transform themselves to continue making a profit.

This last season was one unlike any the resorts had experienced because of the COVID-19 pandemic. Despite the challenges, Snowbowl officials say they had a very good summer thanks in part to a drastically lower attendance rate than they get in the winter season and a relaxation in the COVID-19 regulations. Employees also learned a few things from the previous winter season that allowed for a more open operation.

“This summer went really well, but it was almost completely outdoors,” Linde said. “One of the things we did learn was that the chance of COVID being spread is significantly less outdoors than in confined spaces. So, we kept the gondola windows open and kept deep cleaning the restrooms. But because most of the operation is outdoors it worked out perfectly for us.” 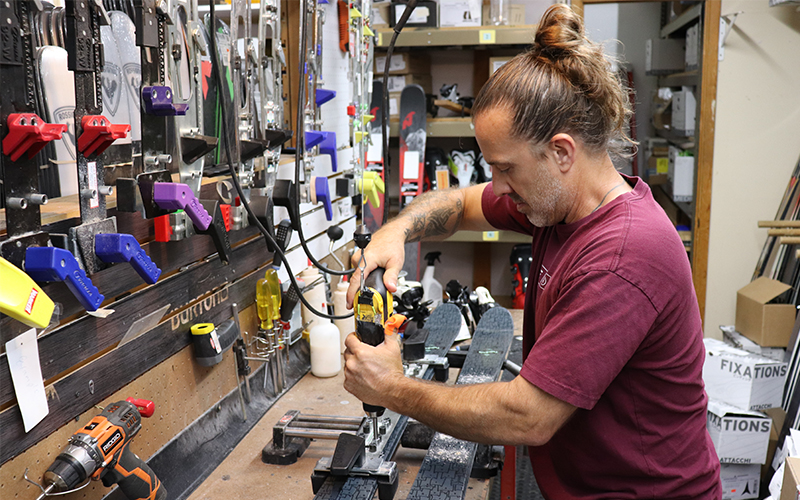 A Ski Pro technician, Justin “Moontown” Monge, spends most of the summer season setting up skis for the winter. (Photo by Jerry Walker/Cronkite News)

During the summer Snowbowl turned its new gondola into a scenic ride that lets visitors view the entire surrounding valley. These rides took visitors up to 11,500 feet, which is nearly the highest point in Arizona, beaten only by Humphreys Peak at 12,633 feet above sea level, which happens to be the top of the same mountain Snowbowl sits on. Snowbowl also offered other summer activities, including tubing and bungee jumping.

Sunrise took a similar summer route, turning its highest chairlift into a scenic viewing ride. The White Mountains resort also offered a number of other activities that Snowbowl did not, such as climbing, horseback riding and mountain biking.

A number of new mountain bike trails were added to Sunrise this past summer, helping lure visitors. Sunrise now has roughly 15 trails for bikers.

“We had a fantastic summer this year,” Shultz said. “Last year we didn’t really have summer because of COVID and the year prior we had a decent season, but this year was one of our best summer seasons in a while.”

Mount Lemmon, the smallest of the Arizona ski areas, may only open for a few days a week during the ski season, depending on the winter weather. Non-skiing activities are essential to keep the business afloat, but with only 200 acres the resort must get creative by running scenic chairlift rides and hosting a number of events. This includes the popular Oktoberfest that runs for four weekends from mid-September through the second weekend of October.

It was not just the ski resorts that reaped benefits despite the pandemic. Some Arizona ski shops also thrived during the shutdown.

“We had a killer summer,” said Steve Andrews, a manager and water sports buyer at Ski Pro. “We sold out through almost all of our product this year as well, and we’ll see how next year goes and keep praying for more good seasons.”

While it is easy for Snowbowl and other outdoor areas to shift to other activities, it is not necessarily the same for shops like Ski Pro that must flip their merchandise from one season to the next. In the winter it is full of skis and snowboards; in the summer, water sports equipment takes up much of the space.

“Skiing and the other thing we do, boating, represent a situation where a group of people get together and do something that isn’t part of their day-to-day lives,” Kannapel said. “I think there’s a natural draw there and it’s at least exhilarating for some people. There’s a bit of a thrill that goes with it similar to water sports.”