HUNTINGTON BEACH, California – The winners of the Surf City Surf Dog contest were clear: Everyone who was on a board or watching from the beach.

For five hours on Saturday, Sept. 25, a few hundred– two- and four-legged alike – came to watch from the beach a mile north of the U.S. Open for Surfing. Rather than doggy-paddling out into position, participating pooches were put on boards and towed out by owners and volunteers to catch the next wave.

“It’s the smiles that matter,” said Donald Horn, the owner of two surfing Cavalier King Charles spaniels, Samson and Delilah. “If you look at the beach today, everybody is smiling, and that’s because we all love our dogs.”

Over the past 12 years, more than 500 dogs have ridden the waves along the famous Surf City coast in these events. More than two dozen canine surfers were judged by professional surfers, and the scores were based on the length of the wave, confidence of ride and the difficulty of the wave and other factors.

The event included other attractions for dogs and the people who love them, such as canine play zones and pet adoptions.

The field was divided by weight classes, with the smallest dogs going first. From West Highland terriers to miniature pinschers, the pooches rode the waves with surprising control of the big surfboards. 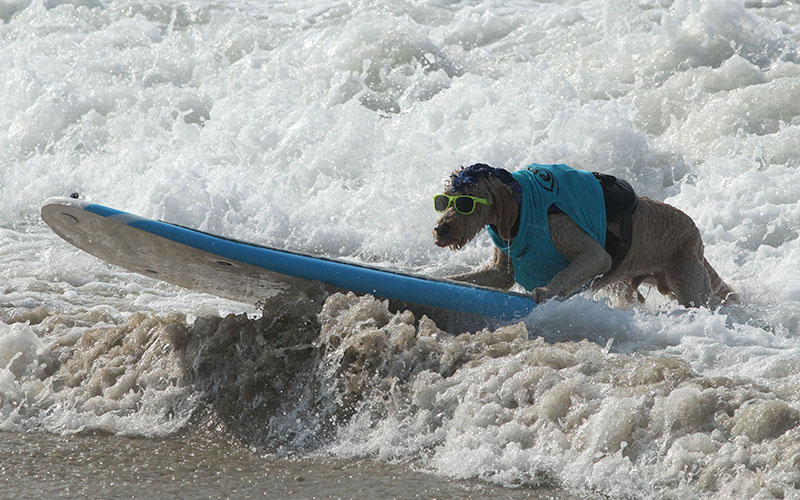 Derby the goldendoodle was one of the most stylish dogs out there, rocking a blue mohawk and sunglasses at the Surf City Surf Dog competition in Huntington Beach on Saturday. (Photo by David Rodish/Cronkite News)

As the tide rolled in later in the day, bigger dogs hit the surf. The tide brought bigger waves, which made things a little hairy for many of the dogs.

After the solo competition came the “double dog” heat, which was dominated by the goldendoodle duo of Derby and Teddy.

Daniel Royce is the owner of Teddy the goldendoodle, and the two started surfing because of Teddy’s affinity for the water.

“He’s barking, yelling the whole way out until he gets on the board,” Royce said. “I don’t have to put him on the board, he just jumps on.”

The day ended with dog/human tandems before each pooch received a participation medal and the top dogs won trophies.

Horn and his spaniels have surfed competitively for nine years. Samson, white with black spots, rides backwards at the back of the surfboard and Delilah, white with brown spots, works the front. Both also competed in the small dog heats.

Like any owner, Horn has a lot of love for his dogs. He choked up at times talking about how much they have meant to him on their journey to discover dog surfing.

“(Samson) always liked the ocean,” Horn said. “When he was about 5, we saw some videos of dog surfing. I thought, ‘I wonder if Sammy would do that.’”

Samson interjected with emphatic barks of affirmation during Horn’s retelling of the story.

“So I bought a cheap board, took Sammy to the beach and stuck him on, and his first three waves rode them all the way to the beach,” Horn said. “I thought I had a winner. 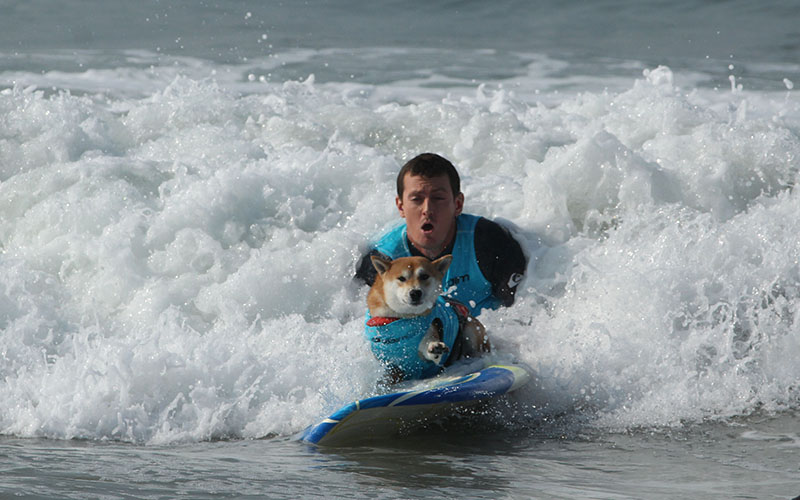 A Shiba Inu gets a push from a human surfer to catch a wave back to the beach at Saturday’s Surf City Surf Dog competition. (Photo by David Rodish/Cronkite News)

“Everybody wants their dog to win, but the dogs don’t give a darn who wins. Even though we’re all competitive and we want our dogs to win, that doesn’t stop us from helping the person we’re competing with. That’s what it’s all about.”

This day meant a lot to Horn and his dogs. Samson, 14, officially retired after Saturday’s event. Delilah, 11, still has some competitive surfing years left in her.

“It’s emotional,” Horn said. “It isn’t going to be his last ride. He just loves it so much.”

The two will still surf together outside competition just for fun, but as Horn pointed out, it was never about competition for the dog, it was just about the fun.

“That’s what it’s all about,” Royce said. “Putting on a show and having fun.”

About Cronkite News 3763 Articles
Cronkite News is the news division of Arizona PBS. The daily news products are produced by the Walter Cronkite School of Journalism and Mass Communication at Arizona State University.