According the Arizona Game & Fish Department, the population density of coyotes in the urban area is twice that in the wild. Coyotes favor residential areas, parks, and golf courses, and use natural areas and washes for dispersal. Coyotes can run at almost 40 mph and can jump a 6-foot wall. That’s why you should protect your pets, even in your yard. The coyote in the photo was lounging in my driveway. See more photos from the Arizona-Sonora Desert Museum digital library here. 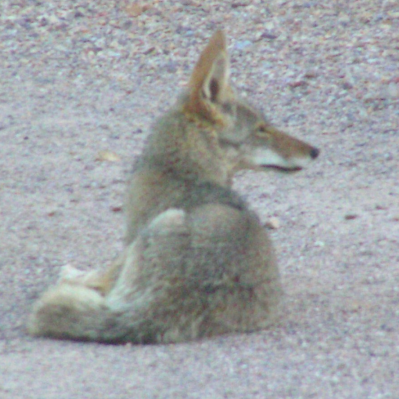 AZG&F says: “Coyotes are curious, clever, and adaptable. They quickly learn to take advantage of any newly discovered food source, and are often attracted to yards with abundant fruit and wildlife to eat. Coyotes will eat pet food and knock over unsecured garbage cans, or may walk along the tops of walls around homes in search of unattended dogs and cats to eat. Coyotes may consider large or loud dogs to be a threat to their territory and become aggressive toward those dogs. Coyotes have lured free-roaming dogs away from their owners to attack, and bold coyotes may attack small dogs on retractable leashes.” Game & Fish has a short brochure about how to deal with urban coyotes here.

The coyote (Canis latrans) is a very adaptable omnivore that occurs in 49 of the 50 states. (Guess which state they don’t inhabit.) A coyote resembles a medium-sized dog with a long, bushy black-tipped tail, big ears, and a pointy face. The fur color varies from grayish to light brown, with a buff or white underbelly. You’ll never see a fat coyote in the wild. Mark Twain wrote: “The coyote is a living, breathing allegory of Want. He is always hungry.” Wiry and with long, slender legs and small feet, a desert coyote usually weighs only 15 to 25 pounds. The tracks are much smaller than those of a domestic dog of the same size. Coyotes will eat anything from road-killed carrion to cactus fruit, mesquite beans, seeds, plants, and meat. They hunt small animals such as rodents, rabbits, birds, snakes, insects — especially grasshoppers and crickets — and any injured animal they can subdue according to the Arizona-Sonora Desert Museum staff.

Coyote attacks on humans are rare, but they do occur. According to research from Ohio State University, there have been 142 reported attacks on humans in the U.S. and Canada since 1960 (see report here). “Attacks were reported from a wide geographic area, including four provinces and 14 states. However, most attacks occurred within the western portion of the United States, with 49% of attacks occurring in California and 13% in Arizona.”

Coyotes, which some call “sound dogs,” typically howl at dusk as they begin their hunt. They also howl to communicate with neighbors and family members. Within neighborhoods, coyotes howling usually sets off the neighborhood dogs.