I noticed an  article in the ADI about a supervolcano on Mars. You don’t have to go that far to find a supervolcano. Yellowstone National Park in northwest Wyoming, a picturesque land of geysers, hot springs, waterfalls, mountains, and lakes, contains the largest super-volcano in North America and among the top three largest in the world. The term “supervolcano” refers to a measure of volume of material erupted and explosiveness. See comparison charts for volume here and the volcanic explosivity index here. You will see that the Yellowstone supervolcano is at the maximum end of both scales.

The U.S. Geological Survey (USGS) map below shows the general setting of the Yellowstone volcano and caldera. Calderas are created following an eruption when the volcano collapses in on itself. 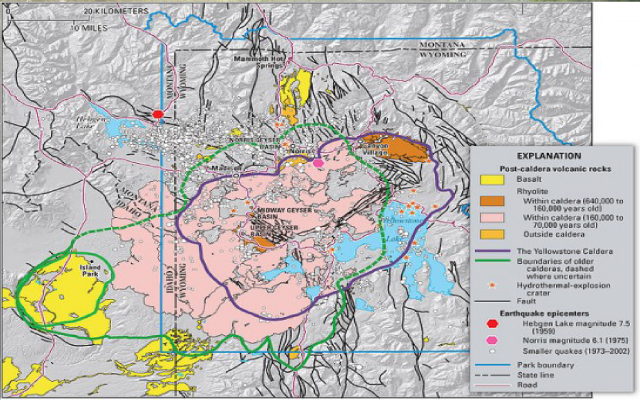 According to the Yellowstone Volcano Observatory , run by the USGS and the University of Utah, during the past 2 million years the Yellowstone super volcano has had three of the world’s largest volcanic eruptions:Eruption of the >2450 cu km Huckleberry Ridge Tuff about 2.1 million years ago created the more than 75-km-long Island Park caldera.

The second cycle concluded with the eruption of the Mesa Falls Tuff around 1.3 million years ago, forming the 16-km-wide Henry’s Fork caldera at the western end of the first caldera.

Activity subsequently shifted to the present Yellowstone Plateau and culminated 640,000 years ago with the eruption of the >1000 cu km Lava Creek Tuff and the formation of the present 45 x 85 km caldera. Resurgent doming subsequently occurred at both the NE and SW sides of the caldera and voluminous (1000 cu km) intracaldera rhyolitic lava flows were erupted between 150,000 and 70,000 years ago.

Yellowstone is presently the site of one of the world’s largest hydrothermal systems including Earth’s largest concentration of geysers. As such, it could be one of the largest sources of geothermal-produced electricity, but that’s not likely to happen.

The USGS map below shows the coverage of ash deposits from the three major eruptions, compared to the 1980 eruption of Mount St. Helens. The map also shows the extent of the Bishop Tuff which erupted from the Long Valley volcano in California 760,000 years ago. 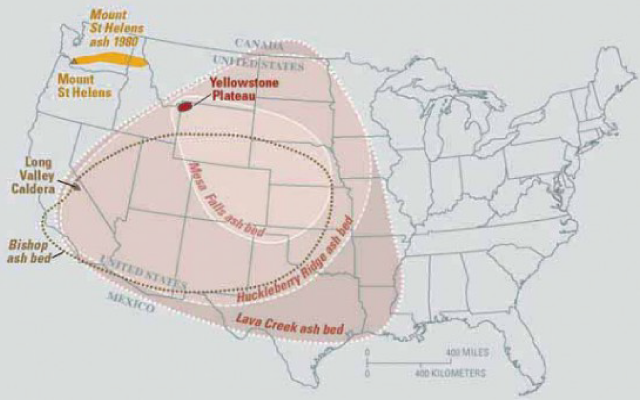 The Yellowstone supervolcano is the youngest of a series of such volcanoes that have erupted over the past 17 million years in that general area. The older volcanoes trace a line running up the Snake River Plain. The graphic below shows the location and age of these volcanoes. Notice also the parabolic shape of earthquake epicenters (red dots). 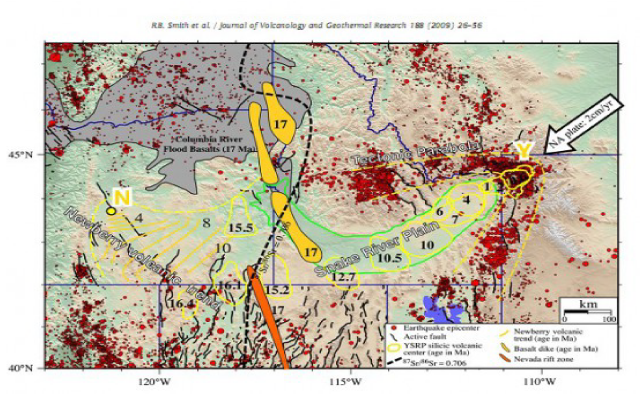 The theory of this volcanic region is that there is a stationary “hot spot” in the mantle that periodically breaks the surface with an eruption. A similar hot spot occurs under Hawaii. In Hawaii, the magma is basaltic which is very fluid so eruptions are relatively tame: volcanic explosivity index (VEI) 0 to 1. In Yellowstone, however, the magma is rhyolitic, very thick and viscous. That makes for violent explosions (VEI 8, the maximum) which produces ash rather than lava flows.

At Yellowstone, eruptions occur in a linear pattern showing that the continental crust is moving over the hot spot at about 2.8 cm/yr at an azimuth of about 247 degrees (toward the southwest) according to Smith et al. “The Yellowstone hotspot has been the source of voluminous rhyolite tuffs and lavas with eruptions often having volumes of hundreds to thousands of cubic kilometers and representing some of the largest Quaternary eruptions on Earth.”

Geophysical investigations show that the Yellowstone magma chamber is 6- to 16 km deep beneath the caldera. Under that, the feeder zone to the magma chamber extends 660 km into the mantle transition zone. More recent investigations suggest that the magmatic plume from this hotspot is not vertical. Recent studies using electrical conductivity show that the plume dips 40 degrees to the west, and extends perhaps 400 miles from east to west.

What is happening now?

The National Park Service assures us, “There is no evidence that a catastrophic eruption at Yellowstone National Park (YNP) is imminent. Current geologic activity at Yellowstone has remained relatively constant since earth scientists first started monitoring some 30 years ago. Though another caldera-forming eruption is theoretically possible, it is very unlikely to occur in the next thousand or even 10,000 years. Scientists have also found no indication of an imminent smaller eruption of lava.”

On the other hand, National Geographic news of January 19, 2011 reports:

But beginning in 2004, scientists saw the ground above the caldera rise upward at rates as high as 2.8 inches (7 centimeters) a year.

The rate slowed between 2007 and 2010 to a centimeter a year or less. Still, since the start of the swelling, ground levels over the volcano have been raised by as much as 10 inches (25 centimeters) in places.

“It’s an extraordinary uplift, because it covers such a large area and the rates are so high,” said the University of Utah’s Bob Smith, a longtime expert in Yellowstone’s volcanism.

Scientists think a swelling magma reservoir four to six miles below the surface is driving the uplift. Fortunately, the surge doesn’t seem to herald an imminent catastrophe, Smith said.

“At the beginning we were concerned it could be leading up to an eruption,” said Smith, who co-authored a paper on the surge published in the December 3, 2010, edition of Geophysical Research Letters.

“But once we saw [the magma] was at a depth of ten kilometers, we weren’t so concerned. If it had been at depths of two or three kilometers [one or two miles], we’d have been a lot more concerned.”

Here is a graphic from Smith, showing topographic swelling caused by magma pressure at Yellowstone; rather impressive: 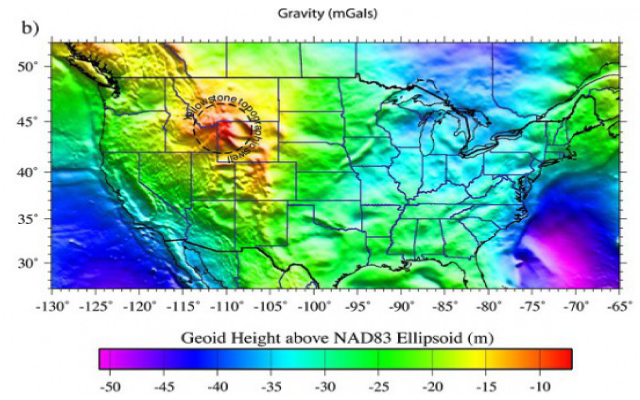 On September 15, 2013, there were several more earthquake swarms near the Yellowstone caldera. Who knows when the pimple will pop?

Reference:
Smith, R.B., et al., 2009, Geodynamics of the Yellowstone hotspot and mantle plume: Seismic and GPS imaging, kinematics, and mantle ow, Journal of Volcanology and Geothermal Research 188 (2009) 26–56. http://www.uusatrg.utah.edu/PAPERS/smith_jvgr2009complete.pdf (There are some nice graphics in the paper referenced.)

See my 7-part series on the geologic history of Arizona:

Chapter 1, Precambrian, when Arizona was at the south pole

Chapter 7, Cenozoic Era, much volcanism as Arizona was squeezed, stretched; steamed and frozen