TUCSON — Granted, it is the offseason, but a quick glance around the Gate 2 underpass at Arizona Stadium shows the need for upgrades.

It’s used as a tunnel to get to and from campus. If it weren’t for the concession stands, gate numbers and a sign warning occupants of bats, pedestrians might forget they’re under a massive, 89-year-old stadium.

This is the biggest of the 20 athletic facilities the University of Arizona hopes to renovate by implementing a mandatory $100 undergraduate fee and an optional $50 graduate fee for incoming classes.

However, among more than a dozen students interviewed on campus, fewer than half knew of the bill and even fewer knew its details. Junior Lizzy Nickerson hadn’t heard of it and voiced an immediate distaste; however, after learning she wouldn’t have to pay the fee — it starts with the next freshman class, then each class thereafter — she wasn’t necessarily opposed.

“Now that I know it’s not affecting us, I’m kind of apathetic,” she said.

Senior Olivia Ridge expressed displeasure with it, saying there are students “who have no desire to participate” in athletics even though she enjoys them herself. Her sentiment shows that despite the fanfare and College GameDay events, not every student is into athletics, even in the Pac-12.

If anything, though, Arizona is late to the party. It held out for quite some time while at least eight other Pac-12 schools implemented similar student fees. Washington doesn’t have one, and Stanford and the University of Southern California are not required to submit financial information because they are private schools, according to the Arizona Republic.

Arizona Student Body President Michael Finnegan disapproves of the athletic fees voted on by the Arizona Board of Regents. He said his governing body negotiated the fee down from $300 and called the situation a “prisoner’s dilemma.” 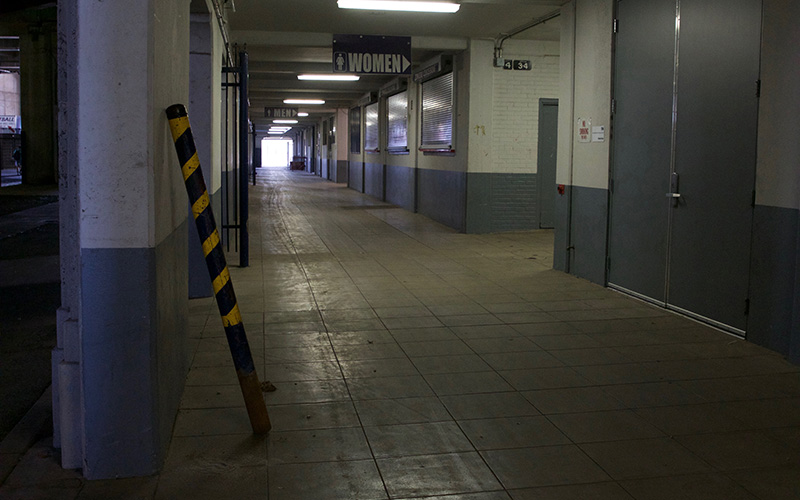 The hallway through Gate 2 of Arizona Stadium shows bathrooms and concession stands in need of upgrades. (Photo by Logan Newman/Cronkite News)

He said the board set a precedent when it set a student fee at ASU.

“After ASU passed their $75 per semester fee, the university saw it as a necessity to be able to keep up with the Pac-12,” he said.

ASU passed its athletic fee in 2014. At the time, the athletic department was in a poor financial situation.

It had gone four years in a row without making any money and a fifth year with a profit under $100,000, according to the Equity in Athletics Data Analysis from the U.S. Department of Education.

Last year, its first with the Adidas sponsorship that pays $4.25 million each year, the department made a $5.5 million profit, according to the EADA.

Arizona, on the other hand, has had a long history of financial success with athletics. The department has had 31 consecutive years with a positive bank balance, according to several sources inside UA Athletics, including former Athletic Director Jim Livengood.

Livengood was the athletic director from 1994-2010 and put together the blueprints for Vision Arizona, a long-term program to help with athletic facilities.

“We did an 18-month study of all the athletic facilities in the University of Arizona,” he said. “It was a 15-to-25-year road map of facilities that Arizona was going to need.”

Livengood’s work as athletic director helped Arizona remain fiscally responsible. However, renovation costs aren’t a one-time deal; for every year damage is left unattended to, it gets worse.

“Every year you don’t do it, it becomes more expensive and it becomes much harder to fix each year that you allow it to deteriorate,” Livengood said.

The football stadium has been standing since 1928. Last year, the athletic director at the time, Greg Byrne, proposed a $200 student fee that he eventually pulled. An online outline of this proposal lists several “substandard and insufficient” areas of concern for the stadium, including restrooms and seats.

There are obvious differences between old and new in the stadium; parts of the 2013 renovations have true seats, while the majority of the stadium has bleachers. Arizona Athletics spokesman Jeremy Sharpe couldn’t confirm which bleachers were newer than others, but the upper sections appear to be aged and colored differently.

Arizona Stadium’s capacity of about 56,000 is nearly identical to Sun Devil Stadium’s, and is in the middle tier of the Pac-12. It holds significantly more than the stadiums of Oregon State, Utah and Washington State, but a great deal less than the Los Angeles Coliseum, home to UCLA, and the behemoth Rose Bowl in Pasadena, California, where UCLA plays its home games.

The new student fee will also help Arizona continue upgrades on the stadium and maintain pace with schools like ASU and Colorado, which went through massive renovations in 2016.

Livengood thinks an athletic bill would’ve helped him during his tenure, but he was still able to maintain a positive bank balance each year.

“In my 16 years I never ran a deficit, we never ran red numbers,” he said in a telephone interview. “We couldn’t. That was just unacceptable.”

Livengood attempted to implement a student fee twice during his tenure but said there “wasn’t much appetite.” He said this was due in part to the school not having one for so many years, which created a stronger resistance to it.

He also said the department’s financial success was a double-edged sword.

“Part of our issue was, during that time, we were balancing every year and we were keeping things under control,” he said. “I think everybody was a little reluctant to try it.”

While ASU struggled to make money, Arizona was able to profit based on meticulous budget planning and the support of donors. Every January, Livengood would meet with each head coach to plan the budget for the upcoming fiscal year, which spans from July to June.

“The hardest thing to manage is trying to get coaches and staff to understand the difference between a need and a want,” he said. “It gets blurred so easily . . . coaches tend to think everything’s a need.”

For instance, while recruiting trips are necessary, what luxuries can be taken out to save money? Equipment might break and need replacing, but is there a way to avoid upgrading for the sake of upgrading?

The donor system, which consists of alumni and people who move to Tucson from different states, is also efficient. Livengood called sports a “front porch” to getting involved financially. The department is the largest athletic program in the Tucson area, while ASU has to compete for attention with four major-league professional sports teams in the Valley.

“It’s just all about relationships,” Livengood said. “It’s building a relationship with people and then after a period of time being able to very specifically talk with them about projects and what is needed.”

When the athletic department has that specific goal in mind, it can go to donors to attempt to persuade them to give money.

“It just cannot be generally, ‘We need money, give us money,’” he said.

Students around campus take notice of this community. Freshman Samantha Jerome, who is from Southern California, said it was part of what attracted her to the school.

“I was shocked to even like go to Target, you see U of A gear because everyone treats it like it’s an NFL team,” she said.

The EADA reported that Arizona Athletics made a profit of more than $4 million in both 2014 and 2015, and USA Today’s annual financial study showed that Arizona had the highest known profit of any Pac-12 school in 2015 (not including Stanford or USC, the conference’s private schools).

Despite this, Arizona’s revenue is in the middle of the pack in the conference. Washington and Oregon brought in more than $100 million in 2015, according to the EADA; Arizona’s mark, $85 million, was closer to that of ASU and the University of California.

With this fee, Arizona could compete with the financial powerhouses of the conference.

Even though there’s historically been dissent from students when the school pushes for athletic fees, Livengood thinks it would’ve helped during his tenure.

“It’s extremely necessary,” Livengood said. “I wish we would’ve had it when I was there.”