At this time of year caring is emphasized by many meaning it is important to have an intimate and human connection with others. And it can be expressed in multiple ways — from helping an elderly person cross the street to fighting a house fire. Some cities in the United States put this into practice more than others.

As a whole, Americans have shown their care through charitable giving more and more. According to Giving USA, Americans donated over $390 billion in 2016, up 2.7% from the previous year. But even if you can’t afford to give away your income, there are plenty of other ways to show kindness to others.

In order to identify the areas that care the most, WalletHub compared the 100 largest cities across 36 key indicators of a compassionate spirit. WalletHub’s data set ranges from share of sheltered homeless persons to number of volunteering hours per capita to share of income donated to charity.

Eight Percent (8%) of the top 100 cities evaluated were in the State of Arizona which reflects positively on the character of the residents of Arizona.

Arizona cities outside of the Top Twenty :

• Memphis, Tennessee, has the highest share of income donated to charity, 5.41 percent, which is 2.8 times higher than in Laredo, Texas, the city with the lowest at 1.92 percent.

• Chula Vista and San Diego, California, have the most volunteer hours per capita, 56.99, which is 3.1 times more than in Las Vegas, Henderson and North Las Vegas, Nevada, the cities with the fewest at 18.51.

• Milwaukee has the highest share of residents who do favors for their neighbors, 20.29 percent, which is 3.9 times higher than in Phoenix, Mesa, Chandler, Gilbert, Glendale and Scottsdale, Arizona, the cities with the lowest at 5.22 percent.

• Buffalo, New York, has the highest share of sheltered homeless persons, 98.05 percent, which is 4.1 times higher than in Fresno, California, the city with the lowest at 24.16 percent.

• Fremont, California, has the lowest child-poverty rate, 4.8 percent, which is 11.7 times lower than in Detroit, the city with the highest at 56.2 percent. 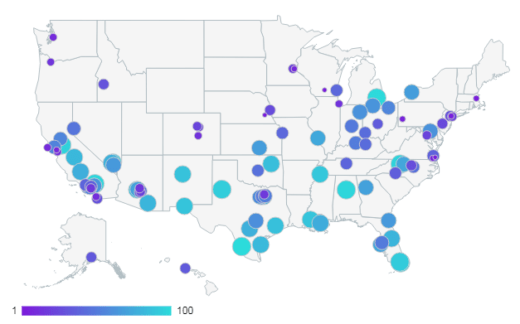 Distribution of the 100 Largest Cities Analyzed by WalletHub.