Buckmoths (genus Hemileuca, several species) are found across southern Arizona, New Mexico, and Texas, and south through Sonora and Chihuahua, Mexico. Habitat varies from mesquite bosques to grasslands and plains, depending on the species. They feed on the leaves of palo verdes, mesquites, and other desert trees. The spines of the caterpillars can release a very painful toxin, so don’t touch them. See photos of the moth here.

The following material is from a publication of the Arizona-Sonora Desert Museum which was derived from: Tread Lightly: Venomous and Poisonous Animals of the Southwest, by Rich and Margie Wagner. Rio Nuevo Publishers, Tucson, AZ. 2005. Reprinted with permission of ASDM.

A number of caterpillars have developed an effective form of chemical defense that utilizes “stinging spines” on their bodies to ward off would-be predators. The most common of these are the buckmoth caterpillars, of which about 23 species are found in the Southwest. The full-grown caterpillars are about 2 inches long (5 cm) and are covered from one end to the other with bristles or urticating spines. The colors are variable and depend on the species. The fast-flying adult moths have a wingspan of about 2-3 inches (5-7.5 cm), and vary in color from relatively nondescript tan and brown to brilliantly colored yellow and orange on black. They are primarily day-fliers, and they do not have stinging spines. (Urticating: cause a stinging pain or sensation)

Juno Buckmoth (Hemileuca juno) caterpillars feed on the leaves of common desert trees, often in groups. When molested, the caterpillar usually stops feeding and remains motionless, counting on camouflage and the urticating spines for protection. Caterpillars occasionally drop off branches and land on people, or are brushed against by riders on horseback, resulting in envenomation by the urticating spines. Other buckmoth caterpillars, like those of the range caterpillar moth (Hemileuca oliviae), feed on grasses, and envenomations can inadvertently occur when a person is walking through the grass.

The life cycle of moths is somewhat complex, and the particular details are species-specific. Flights generally occur from September through December. The mating of most Hemileuca moths, such as the Juno or mesquite buckmoth, begins shortly after sunset on fall evenings. Males use their well-developed antennae to track and follow the pheromone trail given off by female moths. After mating, the female deposits eggs on branches in host trees, with the eggs usually laid in circles around small branches. The eggs over-winter and hatch in April or May into small larvae, or caterpillars, that eat and grow for about a month, molting through five instars before they migrate to the ground and form a pupa, or cocoon, in leaf litter. After metamorphosis, most of the cocoons will hatch into adults (in the fall again), although some Hemileuca cocoons have been known to lie dormant for four years. 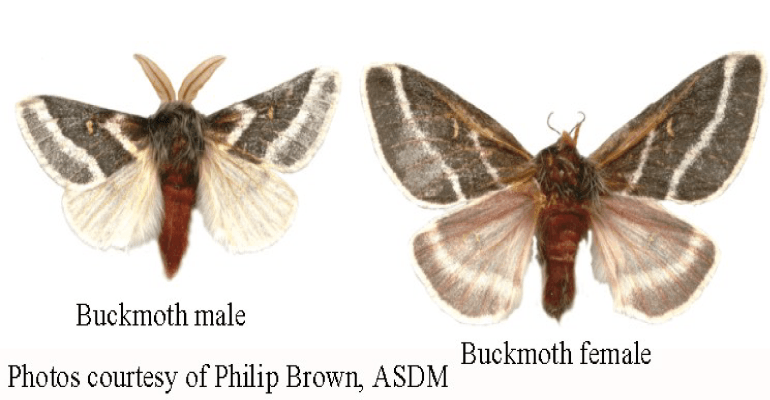 The spines of stinging caterpillars contain toxins that are produced in gland cells. Caterpillars do not have a stinging apparatus per se, but rather depend on intentional or inadvertent contact of the spines with the skin of a victim. After the spines penetrate the skin, they break off, releasing toxins that cause mild to severe pain and other compounds that induce an inflammatory dermatitis called erucism. Because the protein components of the toxins are considered “foreign” to the body, an allergic reaction may also occur. While hospitalization is rarely required for stings on the skin, spines that enter the eyes may cause potentially serious complications.

Anyone attempting to remove a stinging caterpillar should be careful not to incur additional stings on the hands or elsewhere, particularly as the caterpillar drops off. Wash the area immediately with soap and water. Spines that remain in the skin can often be removed with adhesive tape. Baking soda applied as a paste with water may help decrease the pain, as may ice applied to the injured area. Acetaminophen or ibuprofen may be taken for pain. Benadryl® may help treat localized allergic reactions. As always, victims with severe allergic reactions should seek immediate medical attention, as should anyone with persistent symptoms or signs of infection.

The moths, themselves, are harmless.

Buckmoth caterpillars are especially abundant in New Orleans and tend to fall out of oak trees onto unwary people. (See video about “the attack of the buckmoth caterpillars”) There are several other stinging caterpillars; see this from the Florida Poison Information Center.