Proponents of stricter gun control have a problem with the Second Amendment: “A well regulated Militia, being necessary to the security of a free State, the right of the people to keep and bear Arms, shall not be infringed.” One of their arguments is that our Founding Fathers could not have imagined the rapid fire weapons of today. But, in fact, during the time of the American Revolution and ratification of our Constitution there were several weapons in use that could fire much faster than the standard muzzle-loading flintlock rifle of the time. 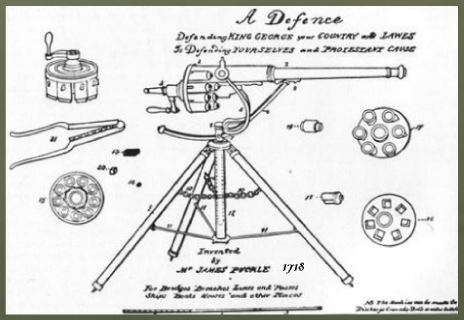 In 1718, James Puckle invented and patented what was essentially a machine gun. According to Wikipedia, the Puckle gun “had a pre-loaded cylinder which held 11 charges and could fire 63 shots in seven minutes [9 shots per minute]—this at a time when the standard soldier’s musket could at best be loaded and fired three times per minute.” The gun was intended for use aboard British ships to repel boarders. Although the Puckle gun was never widely used, it was known at the time of the American Revolution, and the concept was certainly known since Leonardo da Vinci designed a rapid fire weapon in 1481 (see here). 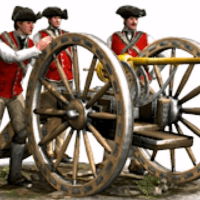 Another relatively rapid fire weapon was the Ferguson Rifle invented by British officer, Major Patrick Ferguson. The Ferguson Rifle was a flint lock, but it was breech loading rather than the standard muzzle-loaded rifle. It could fire up to seven rounds per minute, two to three times faster that the muzzle-loading weapons of the day. Using the Ferguson Rifle, light infantry troops could continue loading and firing without breaking cover, even when lying prone. This rifle was used by the British against the Americans in 1777. Read more

The Girandoni air rifle was an airgun designed by Tyrolian inventor Bartholomäus Girandoni circa 1779. The Girandoni air rifle was in service with the Austrian army from 1780 to around 1815. This rifle had a lethal combat range of 125 to 150 yards. It had the advantage of a high rate of fire, no smoke from propellants, and low muzzle report. It had a detachable magazine containing 19 rounds of ammunition. A single shot from the Girandoni could penetrate a one-inch wood plank, or take an elk. Read more

A Washington Post article by David Kopel notes: “Gun-control advocates often argue that gun-control laws must be more restrictive than the original meaning of the Second Amendment would allow, because modern firearms are so different from the firearms of the late 18th century. This argument is based on ignorance of the history of firearms. It is true that in 1791 the most common firearms were handguns or long guns that had to be reloaded after every shot. But it is not true that repeating arms, which can fire multiple times without reloading, were unimagined in 1791. To the contrary, repeating arms long predate the 1606 founding of the first English colony in America. As of 1791, repeating arms were available but expensive.”

The Washington Post article mentions a German breech-loading matchlock arquebus from around 1490-1530 with a 10-shot revolving cylinder, the Girandoni air rifle, and many other multi-shot hand weapons all available at the time when the Second Amendment was written.

The “failure of imagination” argument falls to the facts of history.