By Catherine Devine and Lillianna Byington

PHOENIX – More than 2.4 million crimes, whose victims suspect were motivated by hate, were committed across the United States in the five years from 2012 to 2016, according to a News21 analysis of the federal National Crime Victimization Survey, which interviews tens of thousands of Americans annually.

Jack McDevitt, director of Northeastern University’s Institute on Race and Justice, said the survey data are important in determining victims’ perceptions of hate crimes at a time of cultural and political upheaval in the United States.

“Groups such as black Americans and the LGBTQ community have historically and consistently been targeted by hate crimes. However, external events and politics can change attitudes towards certain groups,” McDevitt said. “Whenever controversial things happen, it empowers the haters to go ahead and act out because they believe that people share their bias.”

Over the past eight months, News21 journalists reported from 36 states, which included a 7,000-mile road trip across the country to assess the state of hate in America.

Many victims of hate crimes are reluctant to report them to the police. And reported crimes do not always lead to arrests, prosecutions or even a record of hate crimes. Two-thirds of the victimization survey respondents who suspected they were targeted because of hate were unable to cite tangible evidence, such as hate speech, that could be used by law enforcement. Authorities could confirm only 2.5 percent of the reported crimes were motivated by hate.
American Hate Documentary from News21

What the victimization survey found has not been reflected in the FBI’s national hate crime data. In the same five-year period ending in 2016, the FBI counted only 30,000 hate crimes reported to them by local police. Only 12 percent of the nation’s police departments reported any hate crimes at all to the FBI.

“It’s important to look at the number of people who suspect they were a victim of a hate crime and not just the FBI data. People’s perception is their reality,” said attorney Roy Austin, a former deputy assistant attorney general of the Civil Rights Division of the U.S. Department of Justice. “A lot of these law enforcement agencies don’t believe that they have a problem with hate crimes. If they don’t think they have a problem, they won’t deal with it well.”

Among other reasons, News21 found that Latinos don’t report hate crimes because of the threat of deportation. As targeting of their communities appears to be on the rise, Latinos and immigrants are increasingly fearful of reporting racially biased crimes and incidents to law enforcement.

LGBTQ people also are hesitant to report hate crimes because of a chronic distrust between the community and the police. Their cases usually aren’t prosecuted as hate crimes when they are reported, victims said.

Brandon Ballone, a drag performer, was a victim of a violent crime during a night out in New York in 2016. The 27-year-old was wearing a T-shirt advertising his drag-queen personality when a group of teenagers beat him with a glass bottle, leaving him with a severed tendon in his hand, a torn ear and damaged jaw.

Ballone said shock and his impulse to get to safety meant he couldn’t recall whether his attackers used homophobic slurs or called him names. As a result, police didn’t investigate his case as a hate crime.

“Anybody who attacks someone in that kind of way, it seems to me that there is a lot of hate there,” Ballone said. “But apparently, a hate crime, to (the police), means I would have had to hear them say the word ‘faggot.’”

Hate crime laws are not consistent across the U.S. Forty-five states have statutes criminalizing various types of bias-motivated violence or intimidation. Hate crime laws in 14 of those states do not include either sexual orientation or gender identity. Arkansas, Georgia, South Carolina, Indiana and Wyoming have no hate crime laws at all.

In May, Sonya King, a black Muslim woman, was delivering food for DoorDash in Atlanta when her first customer of the day, Rick Painter, 54, grabbed her head covering, pulled her inside his home and began to choke her with it.

“That was some real hateful stuff,” King said. “Every time when I told that man, ‘I got children,’ he pulled harder.” 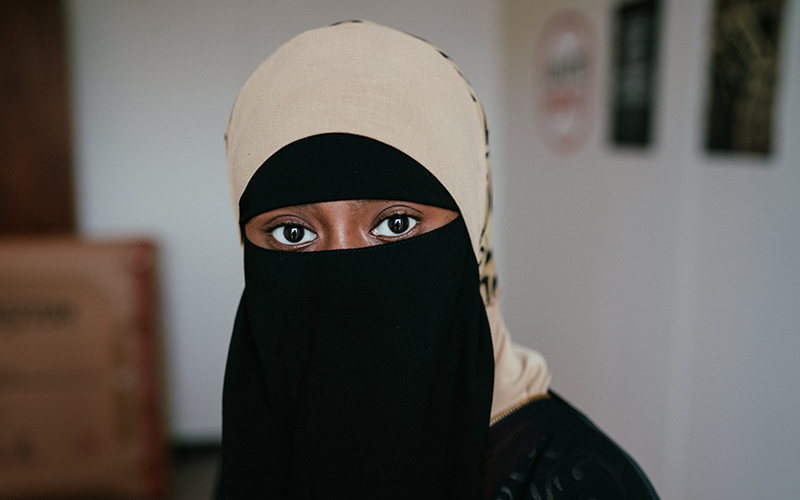 Just 100 hate crimes have been prosecuted as federal crimes from January 2010 to July 2018, according to a News21 analysis of the cases. Half involved racially motivated violence against black Americans.

In one of the best-known cases, during a Bible study meeting at Emanuel African Methodist Episcopal Church in Charleston, South Carolina, in July 2015, a young white supremacist shot and killed nine black parishioners. Dylann Roof was convicted of 33 federal hate crimes and sentenced to death.

Victims, hate groups, advocates and officials across the country also told News21 that the cultural and political divisiveness in America today has emboldened more people to express intolerance toward minorities and that the targets often keep silent.

“Some members of minority groups feel vulnerable and unwelcome in America,” said Northeastern’s McDevitt, who has studied hate crimes since the 1990s. “Between the hateful rhetoric and law enforcement reaction and some police-induced violence, they are feeling under siege in ways they haven’t before.”

“Hate crimes have been pretty consistent for the past 10 years, but during times of elections or political events, things can be very polarizing,” Lieberman said. “There is no doubt that the 2016 election was not a good example of comity and civility and promoting diversity and respect for others.”

Simran Jeet Singh, a senior religion fellow at the Sikh Coalition, said hate speech has changed over time depending on events in the world. Around the time of the Iraq War, he was called “Saddam,” Singh said, but today it’s “ISIS” and “terrorist.”

“Muslim in this country has become a bad word,” he said. “It has become wrong to associate with a particular religious tradition. It highlights the fact that a lot of this hate is rooted in ignorance because people are assuming that I’m Muslim when I’m not, just because of their sort of racial understanding of who I am based on my appearance.”

As faith-based hate increases, religious communities are banding together to rally against the burning of mosques, bomb threats at Jewish community centers and the vandalization of Jewish cemeteries. They are amping up security, hosting self-defense classes and educating neighborhoods about religion to combat hatred.

There also has been an increase in hate crimes and recruitment by white supremacist groups on college campuses. According to data collected from 6,506 higher-education institutions by the U.S. Department of Education, the number of reported campus hate incidents, including harassment and vandalism, increased from 74 in 2006 to 1,300 in 2016.

Identity Evropa, a white nationalist group, is actively recruiting on college campuses. Its leaders said they see colleges as the “last battleground,” where white people are taught to feel racial guilt and led to believe that multiculturalism is a positive thing.

The organization distributes recruitment fliers, stickers and posters on college campuses, drawing the attention of local and national news media. That extends the group’s presence beyond the reach of its own social media channels.

“Generally, the idea is that people see the flier and then they look us up online – we don’t have links on the actual flier, but people use Google and find us that way,” said Patrick Casey, executive director of Identity Evropa.

Heidi Beirich, director of the Southern Poverty Law Center’s Intelligence Project, said the youthful new right is a “millennial-male phenomenon” that is changing the climate of hate in the U.S. The violent misogyny at the core of the alt-right’s foundations distinguishes it from hate groups of the past, she said, noting the “female-bashing that is at the core of the internet,” where young males are becoming radicalized.

Hate groups have increasingly used social media to recruit members and target victims, giving rise to a new phenomenon of internet hate. Tech giants like Facebook and Twitter offer billions of people unparalleled access to the rest of the world.

“What social media does is it allows people to find each other and establish digital communities and relationships,” said Benjamin Lee, senior research associate for the Centre for Research and Evidence on Security Threats. “Not to say that extreme sentiment is growing or not, but it is a lot more visible.”

That visibility reached global attention at the August 2017 Unite the Right rally in Charlottesville, Virginia. Several hundred white nationalists and white supremacists – protesting plans to remove a Confederate statue – chanted such slogans as “White lives matter” and “Jews will not replace us” at a rally at the University of Virginia. The protests ended in violent clashes with counter protesters.

“Charlottesville illustrated the fact that people can still come together and do things in a way that is incredibly public and feel that there are no punishment for it,” McDevitt said.

One woman, Heather Heyer, was killed after James Alex Fields Jr. of Ohio rammed his car into a group of demonstrators.

“People were screaming, you could hear the sounds of thud, thud, thud, but nobody knew what it (the car) was,” said Heyer’s mother Susan Bro. “And I have a picture that was taken a split second by a photographer with Heather looking right at the guy before he hits her.”

Jason Kessler, organizer of the Charlottesville rally, said he feels white people are not given fair treatment in the United States.

“We are fastly becoming a minority in the country we founded, and we’re still not able to have the same rights of assembly and organization that other groups are,” he said.

Randy Gamble, who works with the Lynching Sites Project of Memphis, an organization that advocates for racial-justice healing, said a lot of tensions came to the forefront in Charlottesville, but he remains hopeful for the future.

“We’re dealing with a lot of things from the past that came to the surface,” he said. “People don’t just forget about what happened. Violence happened and that doesn’t go away. We don’t want to repeat that history all over again. We want to change the tapestry of this country in a way that frees people from the wounds.”

About Cronkite News 2412 Articles
Cronkite News is the news division of Arizona PBS. The daily news products are produced by the Walter Cronkite School of Journalism and Mass Communication at Arizona State University.