The Pima County public relations crew was quick to share an appearance by former astronaut, children’s book author, and U.S. Senate candidate Mark Kelly at a public library last week. Kelly is using the public library and school systems to reach out to the much coveted “mom vote.”

Pima County staff shared the news of Kelly’s appearance via Facebook: “Library staff said this was the largest storytime EVER. We’re not surprised considering Astronaut Mark Kelly was at Joel D. Valdez Main Library yesterday reading his book “Mousetronaut.” Needless to say Kelly stuck around after to pose for pictures and sign autographs. What a treat!

Kelly’s book, Mousetronaut: Based on a (Partially) True Story, is a children’s book that was released in 2012. As a result, Kelly’s sudden appearance at Arizona libraries is viewed as campaign event by critics.

It wouldn’t be the first time Kelly benefited from the use of public resources. Pima County taxpayers have spent over $15 million for the construction of World View’s headquarters and launch pad.

World View, a space balloon company, is best known now for an explosion of  balloon as it was being filled with hydrogen in 2017. Not since the Hindenburg disaster has hydrogen been used to fill balloons in North America.

Kelly’s 25-year-old daughter Claudia, according to her Linkedin profile, works for World View as a “Business Opportunity Manager.” Claudia’s profile reads in part: “traveled to nearly 2 dozen countries, from navigating through the Arctic to doing community agricultural service in Nicaragua and has engaged in leadership training programs in use by the United States Military and NASA for team building, conflict resolution, and environmental ethics.”

It is ethics in general that have Republicans questioning the offers of public venues/resources to Kelly.

Whether he is receiving poorly veiled gifts of public resources, or lives under a lucky star, his campaign capitalized on the 50th anniversary of the Apollo 11 mission. In July, Kelly made a daylong visit to the Arizona Science Center, which was widely publicized.

According to various reports, Kelly shook hands with the Center’s visitors and hosted a film showing of Apollo 11: First Steps Edition and lead two planetarium presentations.

That visit was followed up with a visit to the Saguaro Library on July 9, where he once again read his Mousetronaut book to children and their parents. 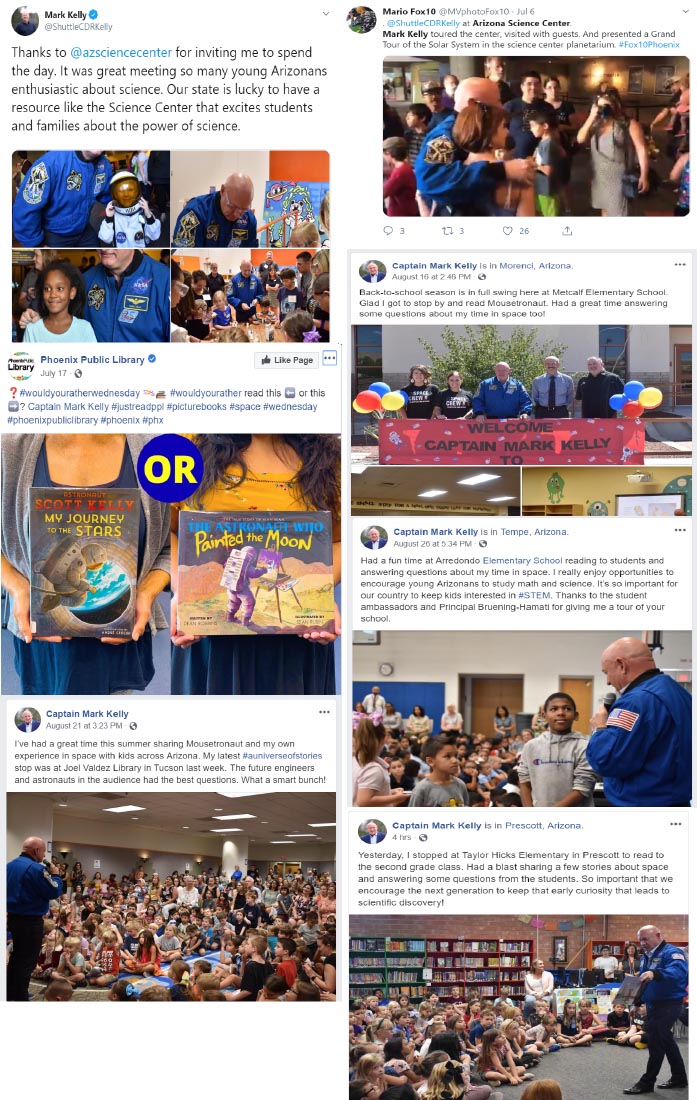