By Erica Block and Stephanie Bates

AVONDALE – The Bluegreen Vacations 500 at ISM Raceway featured five drivers who call Arizona home. Alex Bowman and Matt Levin hail from Tucson; J.J. Yeley is from Phoenix; Michael McDowell was born and raised in Glendale; and 17-year-old Jagger Jones is a third-generation NASCAR driver and a student at Notre Dame Prep in Scottsdale.

But even without the local connections, the Sunday race was an important one for the state and NASCAR and served as a reminder of what’s ahead: Next year, the Valley hosts the sport’s championship race for the first time, a testament to how popular stock car racing has become in the area.

The Bluegreen Vacations 500 is the semifinal race in the Monster Energy Cup Series, which is NASCAR’s “playoffs,” and the race determines which drivers advance to the championship at Homestead-Miami Speedway.

The semifinal and championship are NASCAR’s version of the “Final Four, and the stakes were even higher this year because it set the stage for an even-bigger race. The 2020 NASCAR Championship Weekend will unfold at ISM Raceway Nov. 6-8.

When most people think of Arizona, they don’t think of NASCAR. Formerly known as Phoenix International Raceway (PIR), ISM was built in the early 1960s with a vision of it becoming the “Indianapolis of the West,” since, at the time, PIR was the only road racing course in the western United States.

NASCAR’s foothold in Arizona gradually increased in the late 20th century, but it wasn’t until 1988 that its popularity in the state really began to take off. Since then, the track has been struck by lightning, rebuilt and rebuilt again. 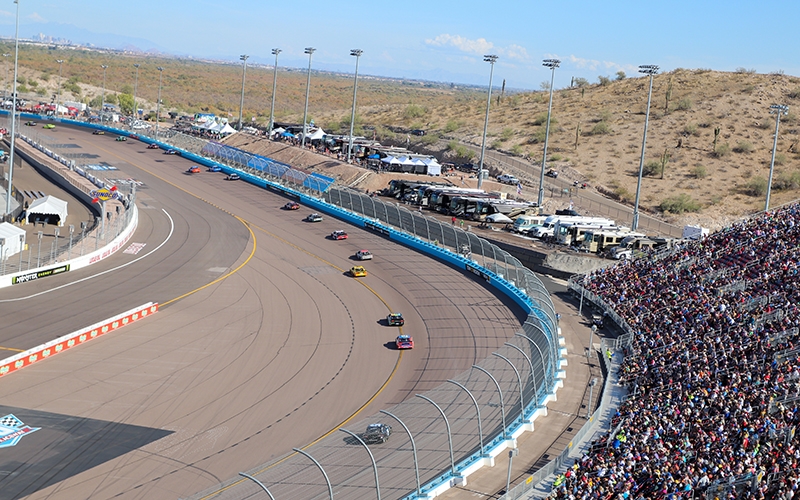 Formerly known as Phoenix International Raceway, ISM was built in the early 1960s. At the time, PIR was the only road racing course in the western United States. (Photo by Erica Block/Cronkite News)

The Bluegreen Vacations 500 showcased ISM Raceway’s latest makeover. According to azcentral.com, the championship race will take place at ISM next year largely because of a $178-million, two-year renovation project to upgrade the track and its amenities.

With so many familiar faces in the field, thousands of Arizona residents flocked to the track over the weekend to cheer on their favorite hometown drivers. But the semifinal race is a big enough attraction to draw fans from across the U.S. and other countries.

One attendee, Ian Pringle, is a biochemist living in southern England. Although he admitted he isn’t “a huge fan of NASCAR,” the Bluegreen Vacations 500 intrigued him, so he decided to buy a ticket and check it out.

“I was working in California last week and I’ll be on the east coast next week, so for the weekend in-between I thought I’d come over here and watch the race,” Pringle said. “I’m a big motorsports fan back home in the U.K. and I’ve always wanted to come to a NASCAR race.”

Pringle said it’s impressive that a NASCAR playoff would draw so many people to Arizona from other countries, since major television channels in the UK rarely broadcast NASCAR events.

“It’s not shown on any of the major channels back home. I’ve been to the Le Mans Series a couple of times and I’ve been to F1 (Formula 1) races,” Pringle said. “NASCAR is something else. The cars on this track are like nothing you ever hear.”

The opportunity to attend a NASCAR playoff also motivated Greg Anderson to take advantage of a cheap flight deal from Alberta, Canada, to Phoenix so he could experience the spectacle.

“Friends of mine do an annual trip every year and this year I decided to tag along,” Anderson said. “We’re from Canada, so we found a cheap flight over here. It was good timing.”

While Anderson was rooting for Martin Truex Jr. on Sunday, he most enjoyed experiencing the fanfare and pageantry.

“It’s the whole experience being out here. The whole atmosphere, really. It hasn’t disappointed so far,” he said.

To observe Veterans Day, pre-race ceremonies featured a number of patriotic displays.. Before the main event, thousands of fans watched as new recruits from Luke Air Force Base took the oath of enlistment. Many in the crowd were decked out in red, white and blue.

“We wear our USA stuff because we love America and we’re free because of it,” said Becky Saxton, who traveled from northern California to attend the race with her husband. She and her husband described NASCAR fans as a community and said they’ve formed lifelong friendships by attending races.

“The main reason I come is to meet up with all of the friends that we’ve made out here over the last eighteen years,” Saxton’s husband Jim said. In addition to catching up with their NASCAR friends, the Saxtons said they were excited to root for Kyle Larson.

About Cronkite News 2679 Articles
Cronkite News is the news division of Arizona PBS. The daily news products are produced by the Walter Cronkite School of Journalism and Mass Communication at Arizona State University.