The 7 p.m. rally comes weeks after the Senate acquitted Trump after an impeachment trial. He is scheduled to speak to a packed crowd as a slew of Democratic candidates who are vying for the chance to replace him debate on a stage in neighboring Nevada.

This is Trump’s 10th visit in five years to a traditionally Republican state that recently has teetered on the edge of turning purple.

McSally, Lesko, Biggs to have roles at rally

Rep. Debbie Lesko’s office said on Wednesday that Lesko and fellow Congressional colleagues Sen. Martha McSally and Rep. Andy Biggs will all have speaking roles at the rally before Trump makes an appearance.

“I think he’s easily going to be reelected,” Lesko said. “We can’t rest on our laurels because I’ve seen first-hand how the Democrats will do anything and say anything to grab back power. But you know looking at all those Democrat candidates for president, I don’t see any of them beating President Trump.”

Lesko was one of eight U.S. congressmen to serve on Trump’s impeachment defense team. She does not believe that Arizona will turn blue.

“Arizona is a crucial state and President Trump will be reelected here,” Lesko said. “We want to make sure that Martha McSally is also re-elected. She’s a great strong Republican woman and she does a great job.” 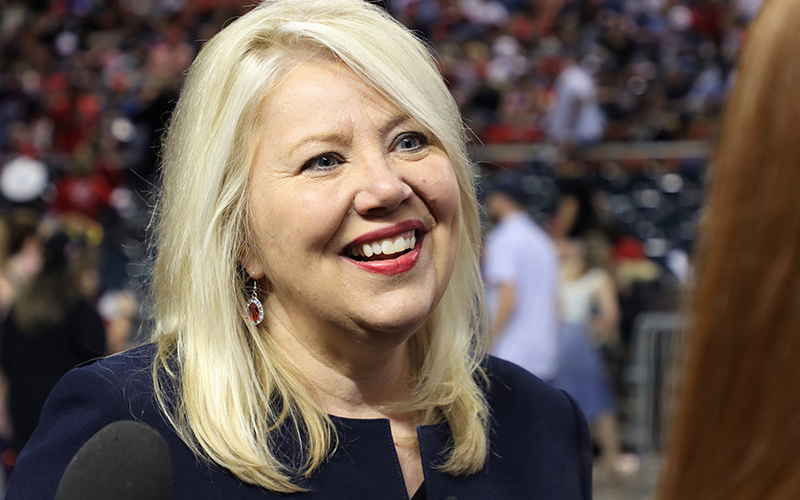 Rep. Debbie Lesko will speak at the rally before President Trump makes an appearance. (Photo by Reno Del Toro/Cronkite News)

President Trump’s last appearance in Arizona was in October 2018, where he showed up in support of Sen. Martha McSally’s bid for Congress. McSally lost a closely contested election to Sen. Kyrsten Sinema but took office in January 2019 to fill a vacant Senate seat.

Kelli Ward, chair of the Arizona Republican Party, agrees with Lesko’s sentiment about Republicans maintaining their stronghold in Arizona.

“We’re a tier one state definitely,” Ward said. “We are on the map.”

Ward started speaking to the crowd shortly after 5 p.m.

An ambulating festival of red, white and blue made its way into the coliseum as doors opened a little before 3 p.m. Supporters donned hats and T-shirts.

By 3:30 p.m. the main parking was filled. All public parking at the fairgrounds was filled shortly after 5 p.m, according to Phoenix transportation officials.

Parking lots at the Fairgrounds are now full. Expect backups on many of the surrounding streets.

Catherine Buzzell, 63, of Phoenix, attended the rally with a group of friends and colleagues from American Airlines, where she’s worked 40 years as a flight attendant.

Asked what she likes most about President Trump, Buzzell replied: “Everything.”

“He reaches out to his people by his tweets so we know what’s going on, because the media’s not supporting our president,” she said. “So by his tweeting, we understand what he’s trying to do. I love him. I love the tweets. Keep on tweeting!”

Buzzell especially agrees with Trump’s stance on illegal immigration. “I do agree with building that wall. … We have to keep our country safe. And the only way to do it is to build that wall. Safety means a lot more than illegals coming across. It’s the drugs.”

Buzzell isn’t worried about the forthcoming election, because the Democratic candidates, she said, “have no message.”

And as for the recent impeachment proceedings? She doesn’t think they’ll hurt Trump’s chances come November.

“They never found anything, they will ever find anything,” she said. “This president is doing a good job for us American people. We love him for that. That’s why you see the support as highly as you see it, everywhere he goes.”

Flipping Arizona from red to blue

Suzie Miranda, of Phoenix, who gives her age as over 60, is a long-time Democrat who is hoping to flip Arizona from a red state to blue. 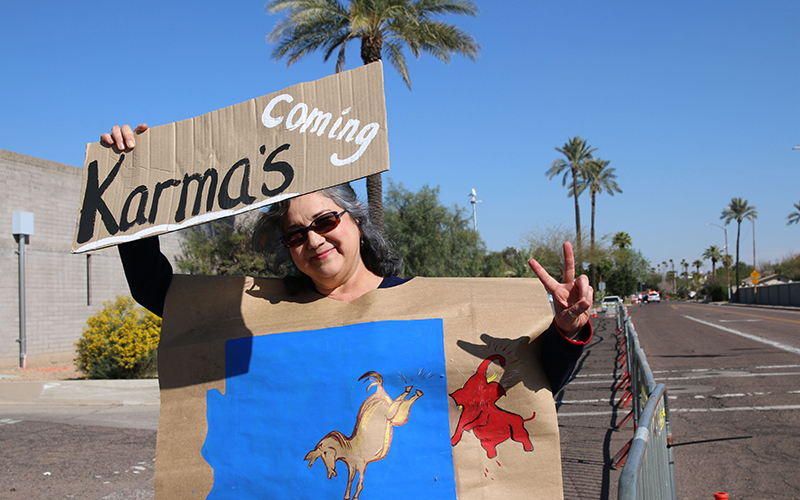 Suzie Miranda, from Phoenix, is showing her protest signs to Trump supporters on the other side of the street. (Photo by Annabella Piunti/Cronkite News)

She joined counter protesters to raise awareness of the injustice of the immigrant families who have been separated under Trump’s administration.

“There’s thousands of children that aren’t reunited with their families and there’s no justification for it,” she said. “These are children that don’t have their moms, dads or brothers.”

Roseann Gonzales, 52, of Phoenix came out to support those who disagree with President Trump’s policies like her cousin, Alice, who lives in Fort Stockton, Texas and couldn’t attend the rally.

Puente member Noemi Romero said there is a lot of fear and trauma after what happened at Trump’s last rally in 2017 – where the aftermath led to Phoenix police firing tear gas and pepper-spray bullets at protesters.

Romero added that a “nonviolent protest is always the goal” and to just ignore how Trump supporters may react tonight.

“We cannot normalize the racism that the Trump administration has brought in to this country,” she said.

A year after the rally altercation, Puente joined Poder in Action and four individuals to file a lawsuit against the city of Phoenix, citing compensation for damages to the protesters.

ACLU’s latest update on Puente v. Phoenix, in October 2019, shows the case moved forward as a class action lawsuit, according to a news release issued by the ACLU Foundation of Arizona.

On Wednesday the ACLU of Arizona issued a statement on the 2017 altercation, adding they were not specifically commenting on Wednesday’s rally.

“In 2017, the Phoenix Police Department (PPD) used indiscriminate and aggressive force against thousands of people peacefully exercising their right to protest by deploying tear gas, pepper spray, and pepper bullets on a crowd that included elderly protestors and children,” the statement reads. “While our lawsuit against PPD and the City of Phoenix is still being litigated, we will monitor how PPD handles the President’s visit tonight and will take all necessary action to hold PPD accountable.”

‘He is for America’

“I see the socialists are taking over this country. I am scared,” said Lisa Kamplin-Gran, who left Vietnam for America in 1972. The former Boeing employee said she knows firsthand the limitations of a communist country.

“When they control you, they take your freedom,” Kamplin-Gran said, adding that she used to be a Democrat, but “Democrats sold us out.”

The impeachment, she said, was a disgrace. “Trump didn’t do anything wrong – he is for America.”

Hours before the doors opened at 3 p.m., Lee Hatfield, 75, and Diane Chavez, 41, both of Mesa, were the first two protesters to show up in the “free speech” zone along Encanto Boulevard north of the coliseum. They said Trump’s signature slogan “Make America great again” actually is about race. 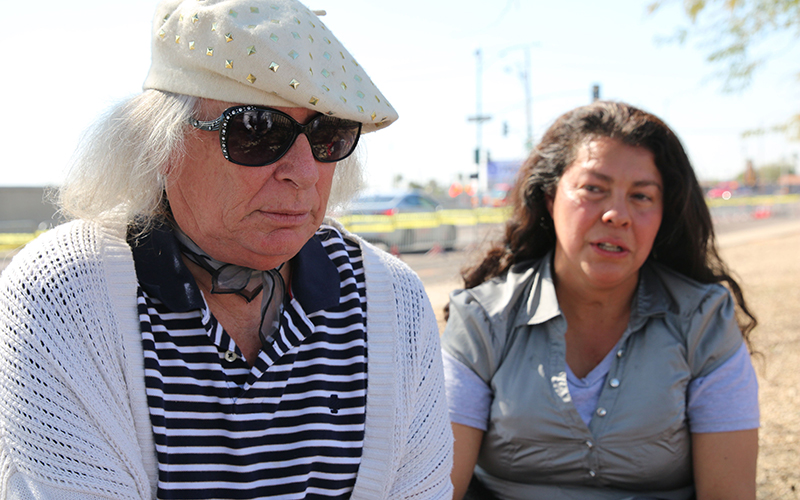 Mesa residents Lee Hatfield and Diane Chavez were the first two protesters at the free speech area on Wednesday. They came out because they feel President Trump lacks the morals of a commander in chief. (Photo by Annabella Piunti/Cronkite News)

“The majority of the white people who support him live in the ’50s. They want to go back to when it was the whites in charge, instead of multicultural,” Hatfield said.

Hatfield said Democratic candidate Mike Bloomberg is the only candidate who can beat Trump because Bloomberg represents a multicultural change.

“Everyone should be united. That’s why it says ‘United States,’” he said.

Anna Espericueta, 44, of Phoenix, wore an American flag scarf and pins with such slogans as “Women for Trump.” The staunch Trump supporter identifies as Mexican and American, and she said Trump will “keep America great.”

“Technically I’m considered a Chicana, but I embrace both my cultures – both the Mexican one and the American one,” Espericueta said. “And I hope that Mexicans and more Mexican-Americans can realize the positive effect Donald Trump is doing in this country.”

About 28% of the Latino voters supported Trump in the last election, according to 2016 data from the Pew Research Center.

Trump’s stance on immigration is among his most controversial policies, with conservatives, liberals and moderates weighing in on severe limits to the number of refugees the country can take in to family separation at the border.

The deadline for voter registration just passed – on Feb. 18. Voting season in Arizona starts March 17 with the Presidential Preference Election – which is only open to registered Democrats in the state.

The Republican Party still carries the majority of registered voters at 34.7% compared to Democrats at 31.3%, according to the Secretary of State website. But the sweet spot for members of both parties lies in “Other” – voters not registered with any party – at 33.1%.

The crowd surrounding the coliseum pumped up the energy with various chants. Some popular ones:

“Build that wall” chants outside the Coliseum as the line continues to grow pic.twitter.com/i0PD7XHtKW

Trump made building a wall along the U.S.-Mexico border a linchpin of his 2016 bid for president. This week, the Trump administration announced it is waiving contracting laws to speed the wall’s construction.

Arizona’s traditional status as a Republican Party stronghold was shored up by Trump carrying the state in 2016. But his win was narrow – 49% to 46%. Arizona is seen as a potential battleground state for 2020 — a result of “progressive organizing efforts” and “demographic shifts,” according to Politico. Red tides turned purple in the 2018 midterms when Arizonans elected a Democratic as senator for the first time in nearly three decades. 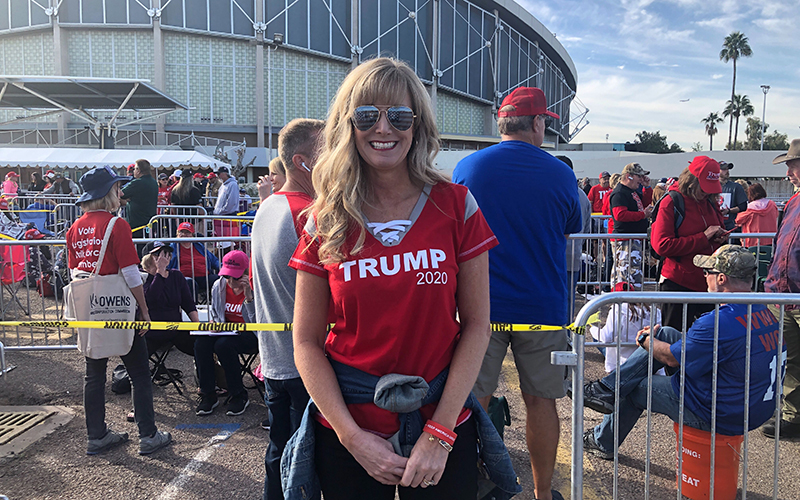 Arizona native Ronda Doolen, 48, volunteered at Wednesday’s Trump rally in Phoenix. She became passionate about politics nearly three years ago because of her experiences in the public school system. (Photo by Caroline Linch/Cronkite News)

Ronda Doolen, 48, who volunteered at the rally, said she wants to hear from Trump about the border wall and get an update on immigration.

Born and raised in Arizona, she was heartened by her surroundings.

“I think the best part for me is being around such great people; the kindness that is shown, and everyone’s so appreciative and considerate,” she said. “We’re all excited about our president, supporting our president and we’re hoping for another four years.”

Forest Moriarty, 45, of Phoenix came to the rally to support the president and be with like-minded people. Whenever you see stories in the news media about Trump supporters, something negative usually follows, he said.

Moriarty’s main issue is school choice, and he wants to hear what Trump has to say about it.

“Part of the reason I got involved in politics was because of education,” he said. “And so I’m ecstatic to hear the president talk about federal scholarships that allow kids to get out of their failing public schools and go to other schools that will actually work for them.”

This was father and son Scott and Sam Dalgliesh’s third time waiting in line for a Trump rally. They didn’t come early enough to get inside the last two rallies, so Sam, 14, played hooky from school and plans to do homework in his chair. 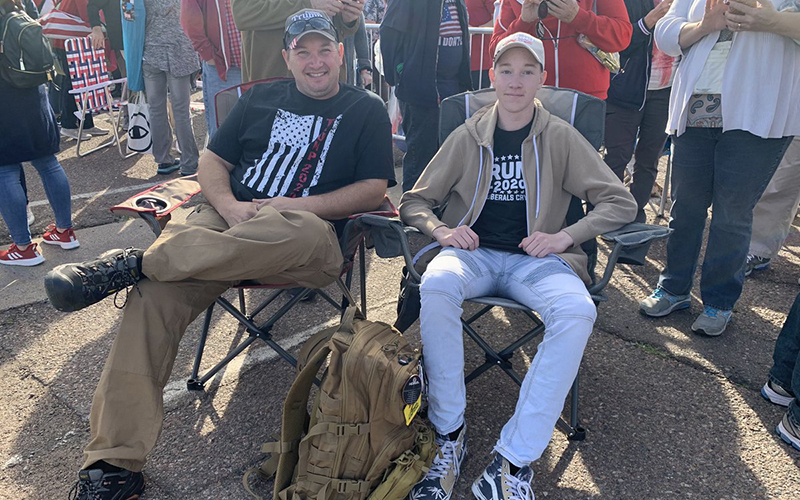 Scott and Sam Dalgliesh have waited in line for three Trump rallies now. They didn’t come early enough to get inside the last two, so Sam, 14, played hooky today and plans on doing homework right here in his chair. (Photo by Jordan Elder/Cronkite News)

The father and son joined hundreds of supporters who snaked around the coliseum at the state fairgrounds, hours before the president’s expected appearance. Some had camped out the night before.

Diverse groups have planned counter protests. Two hours before Trump speaks, organizers from Puente, a migrant justice organization in Phoenix, will lead a march 2 miles from their headquarters to the fairgrounds, according to their Facebook event page.