PHOENIX – It was a common sight to see Michael Fletcher walk the halls of Trevor Browne High School with a stern look on his face that made him seem unapproachable. That stone cold expression would quickly turn into a smile when he greeted familiar faces.

After more than 20 years of coaching Trevor Browne’s boys varsity tennis team, Fletcher, 69, was determined this would be his final season. That moment came sooner than he expected due to the COVID-19 outbreak that forced schools to cease athletic activities.

But his ultimate decision to retire had deeper roots.

“Kids are not interested in playing sports anymore. So it’s hard to coach when kids aren’t showing that interest and when they do come out, they come out late not wanting to come to practice and I wasn’t used to that,” Fletcher said.

His observation appears to be in line with a national trend. Participation in high school sports declined in 2018-19 for the first time in 30 years, according to a study by the National Federation of State High School Associations.

“We know from recent surveys that the number of kids involved in youth sports has been declining, and a decline in the number of public school students has been predicted for a number of years, so we knew our ‘streak’ might end someday,” Karissa Niehoff, NFHS executive director, said in a statement.

Fletcher first became involved in tennis in his 30s when he lost a game to his younger brother Earnie. This was something new for Fletcher as he was accustomed to beating Earnie in every other sport in which they played against each other growing up. 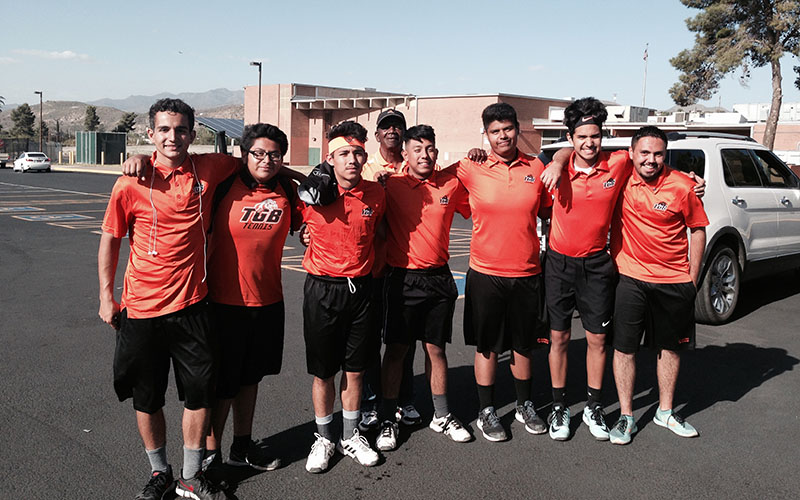 Longtime Trevor Browne boys tennis coach Michael Fletcher (back center) preferred to stay in the background during his success at the high school. He recently retired after more than 20 years of coaching. (Photo courtesy Michael Fletcher).

“I had never played tennis before so we got on the court and he killed me, and I didn’t like that,” Fletcher said.

It was his competitive nature that spurred him to take lessons. After about a year, Fletcher challenged his brother to a rematch. This time he won.

“I wore him out,” Fletcher said with a chuckle.

Fast forward some years later, when Fletcher was teaching special education at Trevor Browne in Maryvale. He developed a friendship with Bruce Sharp, coach of the girls varsity tennis team. Eventually, Fletcher took over the boys varsity team, and quickly realized the vast difference between playing and coaching.

“That’s one thing that Mr. Sharp taught me,” Fletcher said. “He said, ‘You can be the best player in the world. That doesn’t mean you can be a good coach.’ He taught me how to coach tennis and I’ve been successful ever since.”

Fletcher’s teams have posted winning records in five of his last six seasons. Looking back at all of the different teams he coached at Trevor Browne, he said two squads stood out: the 2003 and 2016 teams.

The ‘03 group, said Fletcher, had an exceptional work ethic.

“Those kids loved to practice,” he said. “They practiced on Saturday and as long as they wanted to come out and practice, I was there on Saturday, you know. And when I would tell them, ‘I can’t show up today’ they would get disappointed.”

Fletcher won his first section title with that ‘03 squad after losing one game all season.

Jesus Ramirez, captain of the 2016 team, was honored that Fletcher mentioned his team as one of the best he ever coached and shared how much of an impact Fletcher made on him.

“I mean, on a personal level, he was a father to me because he gave me so much advice. Not just in tennis or in the club, but just in general about life and growing up and how it could be difficult but to never give up and continue pursuing your goals,” Ramirez said.

That 2016 team, Fletcher said, had great chemistry which translated to success on the court.
David Garcia, another player from that 2016 team, said it was a welcome reprieve from the “toxic” environment he was surrounded by growing up playing soccer.

“For me, personally, I’ve never really felt like welcome anywhere until I joined tennis,” Garcia said.

Beyond his coaching achievements, Fletcher said he is most proud of his accomplishments as the sponsor of HTIN – Helping Those in Need – a community club established in 2003.

One of HTIN’s flagship events is the CBT Prom, a dance hosted at Trevor Browne that is open to all students in the Phoenix Union High School District with mild to severe disabilities.

“Just seeing how those kids can have so much fun, they’re just being free dancing and stuff. So like being able to be present and see them interact with other able-bodied viewers you know, it was definitely eye opening,” Ramirez said.

Eduardo Ortega, a 2014 graduate of Trevor Browne and one of Fletcher’s former players, was encouraged to join HTIN by his teammates.

“Well, Mike actually got me to join,” Ortega said. “He had been wanting me to join for a while and I just had never actually gone but one day I finally decided to go to a meeting and ended up joining.”

Current HTIN President Rose Ledesma was a member of HTIN for four years in high school. She described it as an eye-opening experience.

“Well, before I got into it, I didn’t realize how much poverty there was in this neighborhood,” she said. “When I got into the club it really helped me see the importance of helping other people.”

Former HTIN president Julie Jimenez, a Trevor Brown graduate who is now pursuing a career as a pediatrician, still stays in touch with Fletcher.

“He became a really good friend that I still keep in contact with because of that connection with the club and he still keeps me informed regarding events, and I always participate as best I can,” she said,

The culture of high school sports might have changed, but the friendships and impact Fletcher made in his decades coaching tennis will never leave him.