PHOENIX – The coronavirus has hit all types of people in every kind of community over the past seven months. University of Arizona football coach Kevin Sumlin knows that firsthand.

He now advises his players to be vigilant in protecting themselves against the coronavirus using his own experience as Arizona announced Sumlin tested positive for COVID-19 Monday.

“The lesson is this thing is serious,” Sumlin said in a Zoom press conference Wednesday. “No matter what precautions you have, you have to be extremely aggressive about your protection, about your health, as well as others.”

Contact tracing initiated by Arizona determined Sumlin’s result was not related to team activities, and no one within the football program had been in close contact with him, according to the university’s announcement.

Sumlin said he is unsure if he will be allowed to participate in the start of fall camp in person Friday. He added he will speak to Dr. Stephen Paul, assistant team physician for Arizona athletics, later in the week to gauge whether he could attend.

Sumlin said he is also unsure of how or where he contracted COVID-19.

“You do the best you can, right? Don’t know how, or why, or what happened,” Sumlin said.

When asked about whether he worries about how COVID-19 could affect the Pac-12 season, Sumlin said, “It’s always a concern.” 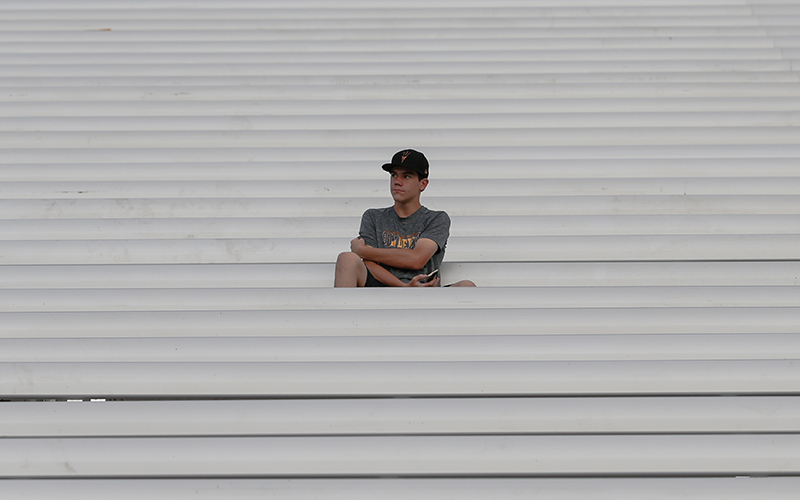 He specifically pointed to an NFL game between the Baltimore Ravens and the Pittsburgh Steelers being postponed due to the Tennessee Titans suffering a coronavirus outbreak, which caused schedule shifts for all three teams.

“So, there’s a real possibility something like that can happen at any time,” Sumlin said. “What you can do is the best you can and prepare. I think our league, with our testing protocols and everything else and playing a conference schedule and controlling what that looks like, I think it gives us the best chance to play all of these games.”

The Pac-12 CEO group recently voted to return to play a seven-week football schedule, thanks largely to its partnership with Quidel Corporation to provide daily, rapid-results testing to student-athletes.

Sumlin is part of the Black American community that suffers from COVID-19 at a higher rate than other races or ethnicities.

According to data from The COVID Tracking Project, Blacks in the U.S. have suffered 98 coronavirus deaths per 100,000 people, more than any race or ethnicity in the country. The Black comminity accounts for 21% of COVID-19 deaths in the U.S. where the race of a person who died is known, according to the project.

Arizona State football coach Herm Edwards wished Sumlin well, and said it’s a reminder to the opponent “you can not see” that teams have to prepare for.

“It’s an equal opportunity virus, it doesn’t matter who you are,” Edwards said in a Zoom press conference Wednesday. “Put yourself in a position where obviously, you catch it, how many other people it’s going to affect, and that could be catastrophic to a football program.”

As of Wednesday, Arizona reported 87 positive cases within its community over the past 10 days, according to the university’s COVID-19 dashboard.

As Sumlin looked ahead to prepare for the team’s first matchup against Utah on Nov. 7, he expressed gratitude for his and his son’s conditions, and said everyone should continue to take precautions in guarding against the coronavirus.

“I’ve been fortunate over the last week about symptoms and being asymptomatic, and so has my son,” Sumlin said. “If there’s anything that’s good out of it, it’s become that, and you can not be too careful.”