If state legislators pitched an “education funding” plan that gave just 13 cents of each new dollar to teachers, what would you call it? Perhaps a waste, an insult, or a scam?

Of course, Prop 208 (also known as the “Invest in Ed” initiative) didn’t come from state legislators—it came from $4 million dollars poured in from political organizers in Portland, Oregon. But in any case, out of the hundreds of millions of dollars Prop 208 would raise via higher taxes, it would put just 13 cents of each new dollar toward increasing teacher pay. And if that weren’t bad enough, that would be an improvement over the spending behavior of our school districts over the past 40 years. Indeed, as shown in a new Goldwater analysis, while K-12 funding has increased more than $60,000 per class of 20 students (in inflation adjusted terms) over the past four decades, districts have put less than ten cents per dollar of that increase toward boosting teacher pay.

So let’s start with the 13 cents for teachers raised by Prop 208—surely this isn’t true? After all, the official infographic from the Invest in Ed campaign shows that 50% of the money from Prop 208 goes to “Teacher Pay.”

That sounds great, except for the fact that—and I urge every last reader to check this for yourself—the drafters literally rewrote the definition of the word “Teacher” in the initiative to say it “means any non-administrative personnel…who instructs students or support student academic achievement…”

In other words, any staffer who a school district wants to say supports students’ academic achievement is now a “teacher” (I guess that’s one way to solve a teacher shortage?), and every extra dollar those other staffers get now counts as increased “teacher pay” in the eyes of Prop 208’s backers.

And if this sounds farfetched (again, please look yourself) even the initiative itself separately distinguishes between the “teachers” eligible for the 50% of Prop 208’s dollars on one hand, and the actual “classroom teachers” who are guaranteed only the 13% allocated to retention and mentoring and the Arizona Teachers Academy.

This false advertising bait-and-switch alone should be enough to sink Prop 208 in the eyes of voters who care about K-12.

Yet perhaps this shouldn’t be a surprise: Arizona state lawmakers fully met the union’s #1 demand just two years ago: a 20% teacher pay raise, which gave districts enough money to bring average teacher pay to roughly $58,000. According to the Arizona Tax Research Association, that money from state lawmakers was enough to boost Arizona’s teacher salaries to #26 in the nation (#16 when adjusted for costs of living). Yet the Invest in Ed campaign has gone out of its way to downplay this investment, saying it amounted to “nothing” to educators.

Speaking of Arizona’s overall investment in K-12, we’ve heard over and over that our state legislators have gutted public school funding. Well, what you probably haven’t heard from union activists is that both the U.S. and Arizona have dramatically increased K-12 funding over the past several decades, and that it has been districts channeling funding away from teacher raises.

In fact, as Goldwater’s new analysis shows, after adjusting for inflation, total per pupil funding for Arizona public school students has increased 42% since 1980, rising by over $3,000 per student from $8,119 to $11,594. (In unadjusted dollars, funding per student has increased even more dramatically during this time, from $2,602 to $11,594.)

That means that a classroom of 20 students has over $60,000 more on average to spend each year on students’ education than in 1980, even after adjusting for inflation. 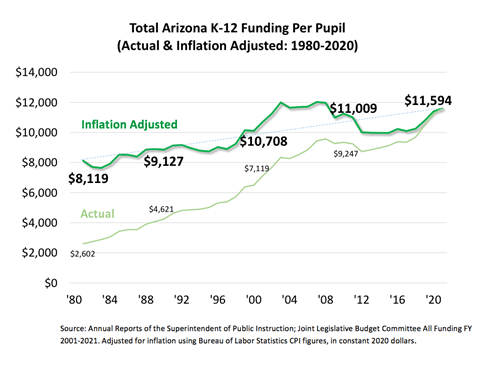 Yet just as Prop 208 would put a mere 13 cents toward teacher salaries going forward, school districts have put less than 10% of their funding increases over the past 40 years into boosting teacher salaries.

How could that be? Well, compared to the more than $60,000 increase in funding available per class of 20 students, districts have increased average teacher salaries just $4,500 per teacher (adjusted for inflation). Specifically, average teacher pay in Arizona in 1980 was $17,158 ($53,537 in today’s dollars), compared to the $58,000 available today. (And it’s not even an issue that districts simply hired more teachers instead: the student-teacher ratio hasn’t budged.)

But what about the massive cuts we’ve heard so much about? Well, even adjusting for inflation, Arizona students receive more money today than any year in state history except a handful of years in the run-up to the Great Recession. And it turns out even that peak in funding in 2008 owed much to state legislators’ decision to increase K-12 funding by hundreds of millions of dollars a year above what was required by law back when the economy was strong. And when looking at decade over decade increases—rather than arbitrarily starting the clock at the peak of the housing and economic bubble leading into 2008 like Prop 208’s backers insist on doing—Arizona’s per pupil funding has increased every decade since 1980, even adjusted for inflation, rising from $8,119 (1980) to $9,127 (1990), to $10,708 (2000), to $11,009 (2010), and to $11,594 (2020).

In short, while it is true that Arizona has increased its per pupil expenditures less aggressively than other states, even as it continues to outperform many of these same higher-spending peers in both math and reading, Arizonans ought to look for ways to continue improving and expanding educational opportunity for students—as state legislators have done—not reward deceptive, politically motivated ad campaigns like Prop 208.

Matt Beienburg is the Director of Education Policy and the Director of the Van Sittert Center for Constitutional Advocacy at the Goldwater Institute. He is the author of the new policy brief A History of Increase: K-12 Funding in Arizona.