It was the Broncos’ first victory over the defending state champions this season after losing to Hamilton at the Antigua Invitational by 12 strokes and the Dobson Invitational by one shot.

“We kind of think we proved to ourselves that we could beat Hamilton, which is our competitor going in the state,” Brophy senior Cameron Kaiser said. “The fact that our worst score on our team was 3-under-par just gives us a lot of momentum going into state and just more confidence in what we can do at state.”

The mission is far from completed for Kaiser and his teammates. Kaiser knows that the Broncos must go very low again at Omni Tucson National to win the state tournament, which began Wednesday and ends Thursday. 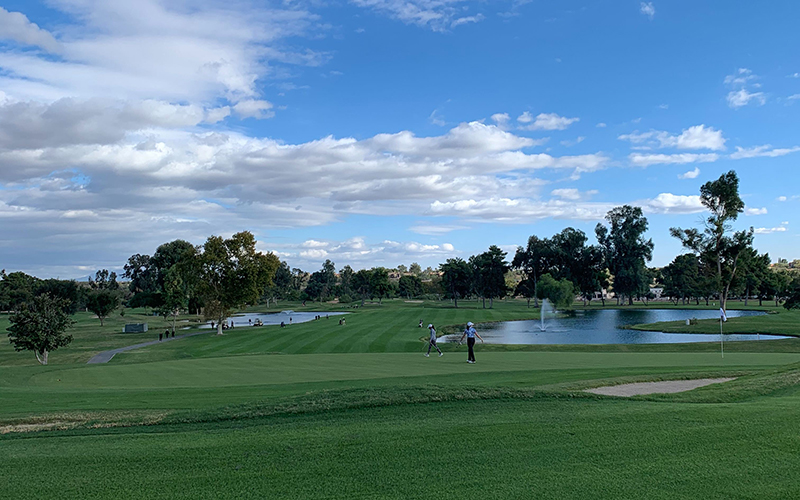 “Last year, our team shot 10-under-par and Hamilton beat us at 13-under-par,” Kaiser said. “(The target score is) at least 15-under-par this year. I think both of our teams are a lot better than last year, and somewhere around that 15-under-par mark would be a good goal.”

Will the Broncos take home the state title on Thursday evening? Kaiser did not hold back his confidence.

Broncos coach Jon Shores believes the Duke Open “did exactly what we wanted it to do. It showed us that when we’re playing well, we can compete with Hamilton.”

Making Hamilton play under pressure at the state tournament was the most important goal for Shores and his team.

“The front nine of Day Two, Hamilton kicked our rear ends,” Shores said. “They were 10-under (par) on the front nine to our 2-under. (During) the last nine holes of the event, Hamilton just started making a couple of mistakes, and we did not make mistakes.

While Hamilton has three of the state’s top players, the Broncos pride themselves on their depth. And their depth goes even deeper than their five players who will be competing in the state tournament.

“I’ve got a really deep team,” Shores said. “I’ve got 10 guys that can all play top five. The depth is really advantageous for me because I know that four or five (players) are going to be able to post decent scores. But (Hamilton’s) top three or so top heavy and so good that my top five are going to have to all be on. (Hamilton) could afford to (have) their fourth or fifth (player having) an off day. That’s going to be really important.”

During this pandemic, having the insurance of going deeper than more than five players is a nice luxury. As for now, it looks like neither team will be dealing with any players missing time due to contracting COVID-19, but nothing is guaranteed in 2020.

Finishing strong on each hole and each round were the main talking points for the Broncos this past week leading up to high school golf’s biggest stage.

Although the Broncos took down Hamilton at The Duke, the Huskies played the invitational without reigning individual state champion Johnny Walker. Coach Steve Kanner knows how crucial Walker will be for the Huskies to win state.

“Anytime you don’t have the defending state champion you know that’s a loss,” Kanner said. “(It’s) hard to replace somebody like Johnny. He’s had a great high school career, he’s one of our top three players, and not having him doesn’t put us at full strength. We have good players and we still feel like we can compete against anybody without Johnny, but it sure would have been nice to have him there.”

Kanner will be happy to have Walker back for the state tournament, but he didn’t let Walker’s absence discredit Brophy Prep, which also was without one of their best players.

“It’ll be great to have Johnny back in the lineup for the state tournament and we will be at full strength,” Kanner said. “Even in the Dobson tournament, we didn’t have one of our best players for one of the rounds. (However), Brophy was missing one of their better players, too. Any way you cut it, I think the teams are well-matched, looking at overall scores throughout the season. It looks like the two of us have kind of separated ourselves from the rest of the pack.”

But every tournament also needs a dark horse, right? Pinnacle Pioneers coach Jay Thomas believes his team, which was without their best player in their fifth-place finish at the Duke Open, fits that criteria.

“We’re working on improving, of course, every day,” Thomas said. “But we also have our number one player back. Joseph Lloyd wasn’t playing with us (in the Duke Open). We just (went) back to our regular schedule. We (worked) our short game, doing a lot of putting (and) practicing iron shots that we need to hit into the greens. It’s just business as usual. Yes, we had a fifth-place showing, but I don’t think that’s indicative of where we will be at state.”

The goal for the Pioneers remains the same as for the Broncos and Huskies: win a state title. Not being one of the favorites does not faze Thomas one bit.

“When you get to state you want to have a chance to win, and we have that chance,” Thomas said. “That’s the way we’re looking at it. It’s been our goal since the first day. I told the boys back on Aug. 17 that I came here to win the state championship and nothing else. We’ve got our chance and that’s what our goal is.”