PHOENIX – As Election Day looms, the biggest worry for many Arizona voters is whether their votes will be counted.

Ballot rejection is a possibility. Voters may forget to sign mail-in ballots, use the wrong color ink to mark the ballot and mail an early ballot too late for delivery by Nov. 3.

Thousands of Arizona residents have already voted, but it’s not too late for those who haven’t yet turned in early ballots or plan to vote in person Nov. 3. Data Orbital shows that nearly two million early ballots have been returned so far.

1. Sorry, it’s too late to mail your ballot but you can still vote early

Tuesday, Oct. 27, was the last recommended day to drop a ballot in the mail. But voters can drop off mail-in ballots at early-election sites or until 7 p.m. on Nov. 3.

Voters can find the closest polling place for early voting at their county recorder’s website – for Maricopa County, it’s recorder.maricopa.gov/pollingplace. Arizona residents also can visit a portal through the Secretary of State’s Office to get voter information on all 15 counties.

“Voters can also track their mail-in ballots online at the county recorder’s website,” Barbara Norrander, professor at the School of Government and Public Policy at the University of Arizona, said in an email. “Since many Arizonans voted by mail in the past, Arizona should have fewer problems with mail-in ballots than in other states.”

Provisional ballots allow voters who can’t meet the requirements at certain precincts (voters are not on the registration list, their identity or eligibility cannot be established, they requested an absentee ballot, or there was a name or address change) to cast their vote and have it reviewed at a later date.

Voters who have requested an early, mail-in ballot won’t be allowed to vote in person – to do so would risk the integrity of the voting process because poll workers have no evidence that a voter hadn’t already filled out a ballot. Such voters are allowed to fill out a provisional ballot.

“The whole purpose of a provisional ballot is if somebody comes to the polling place and there’s some question about whether they should be allowed to vote,” Fessler said. “A lot of them are rejected because when they go to try and resolve the issue, they realize this person really shouldn’t be allowed to vote.”

The Arizona Secretary of State Office website explains that voters will receive a provisional ballot if they recently moved and did not update their voter information, voted at a different polling place than the one to which they were assigned, requested an early ballot by mail, have a registration that is no longer active or they aren’t registered at all. 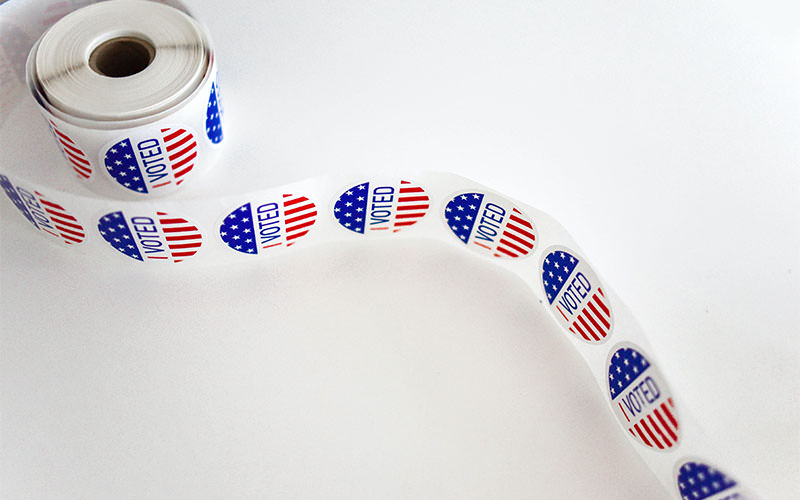 Unless you vote in person, there’s a possibility your ballot will get rejected because of a mistake. The surest option is to make sure you sign the security envelope, use a pen with blue or black ink to mark your choices and carefully follow instructions. (Photo by Element5/Creative Commons)

The California Republican Party acknowledged placing 50 misleading ballot drop boxes in three counties, according to the New York Times, and has resisted demands to remove them. And in August, the Arizona Attorney General’s Office sent a cease and desist letter to a Washington state company that offered to collect ballots, which is an illegal practice known as “ballot harvesting,” according to Capitol Media Services.

Official drop boxes in Arizona are easy to spot.

“Our drop boxes actually look like a large blue bin, it has a tiny slit, and you can drop off your ballot there,” Solorio said.

Maricopa, Pinal and Navajo counties also have an official seal on their drop boxes, Solorio said, and at some locations across Arizona, elections staff will be present at official drop-box locations. Some cities’ websites also list those locations.

“Drop boxes were actually not that big of a deal until this year,” said Fessler of NPR, “and all of a sudden they had become so much more popular. I just think it’s important voters check your local election office – and make sure you are putting your ballot in an official drop box.”

4. Sign early ballot envelopes and be sure signatures match

Mismatched or missing signatures on the green security envelope make up a large portion of rejected mail-in ballots.

“Lots of people forget (to sign) – that’s probably the main thing that people forget to do,” Fessler said. “Sometimes the signature doesn’t match the signature that is on record in the local election office, and sometimes it gets rejected as a result of that.”

Solorio draws on the primaries as an example.

5. Turning in an early ballot? Put your phone number on the security envelope

Listing your phone number means possible issues with your ballot can be easily resolved, Solorio said.

“We don’t retain this information,” she said. “If there is a question about your signature, we are able to call the voter and verify that the voter signed the envelope and returned it to our office.”

Once the signatures are verified, she said, the envelopes are stored in a secure location and then disposed of after the election.

Each section on the ballot instructs the voter to choose a certain number of candidates. If the ballot says choose two and you only vote for one, your vote is still counted.

But don’t exceed the maximum number of choices offered.

“If it says two and you end up voting for three, that’s called an overvote,” Solorio said, and that vote in that specific contest will not be counted.

7. The color of ink you use and properly filling in those ballot circles matter

Voters must only use a black or blue pen when filling out their ballot or it will be rejected. Markers – other than a fine-tip Sharpie – pencils or pens with other color ink are unacceptable because the scanner may not be able to read it. Voters need not worry if the ink seeps through to the other side of the ballot, Solorio said; it won’t affect the other votes.

The method of marking your choice also makes a difference.

“Sometimes people will circle the little bubble next to the name instead of filling it in,” Fessler said. “That will also get their ballot rejected.”