PHOENIX – Pomp, circumstance and long-standing traditions are aspects of college football bowl games that players, coaches and fans have learned to cherish over the years.

Yet in 2020, due to the COVID-19 pandemic, sports as we know them have looked different. That will include the first day of 2021 as well, when No. 10 Iowa State and No. 25 Oregon square off Saturday in the 50th Fiesta Bowl at State Farm Stadium.

Gone are events normally held in the days leading up to the game. This year, no pep rallies, community outreach events or the annual welcoming of the teams by Fiesta Bowl volunteers are on the agenda. It’s a tough stroke of luck for a game celebrating its half-century milestone.

Instead of the usual fanfare, the Ducks and Cyclones arrived on Thursday for the Saturday game. It will be a quick business trip for both teams to celebrate successful, but weird, seasons.

“If I’m going to be honest, from a coaching standpoint, it’s kind of nice,” Iowa State offensive coordinator Tom Manning said. “You just get to go and play the game. I think certainly from the experience, this is a big deal, and playing in this game is an honor and it’s certainly humbling.

“And I think our players, to have the opportunity to do the things that typically would be involved in the Fiesta Bowl, would be a once-in-a-lifetime opportunity. And certainly missing out on that is tough. And you would like … to have the full experience of the Fiesta Bowl. But I think it’s kind of the way that it’s just gone this year. You can’t make excuses about it.”

“Teammates have been asking me every day at practice … a new question here and there about Arizona,” Purdy said. “So it’s been fun just to tell them about everything that I’ve done growing up, playing in games in Arizona, things like that. But yeah, it is a little bit of a bummer not being able to do the full couple days of activities and whatnot.

“I really wanted to show them (his teammates) around a little bit and have them experience that. But it is what it is this year.”

A big part of the Fiesta Bowl in a normal year is a packed house. State Farm Stadium has had over 71,000 fans at three of the last five Fiesta Bowls. This year, not even a limited amount of fans are allowed to attend. The only crowd at this year’s game will be a small number of the game participants’ friends and families. 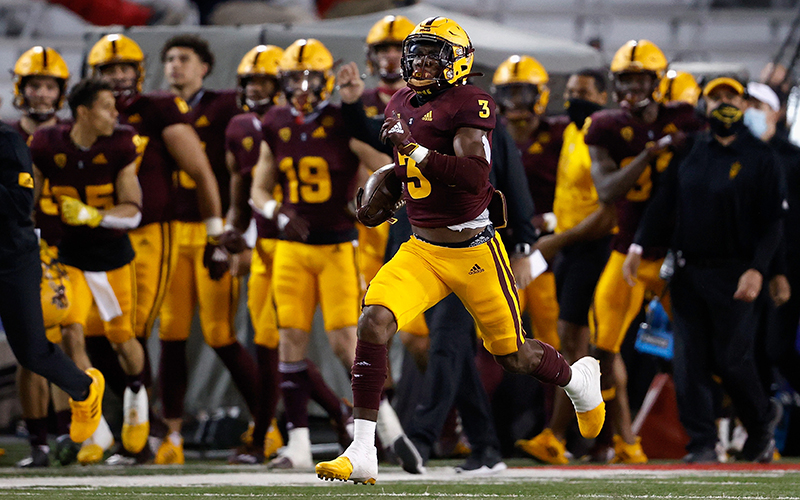 Even having friends and families in the stands is a new experience for Oregon this season. The Ducks have not experienced playing in front of anyone during the 2020 campaign due to strict restrictions on crowd size by local authorities both in Eugene and in the places the Ducks have traveled.

Oregon cornerback Deommodore Lenoir was excited for the opportunity to play in front of a live audience, even if it’s a small one.

“It’s going to be fun,” Lenoir said. “When I make a play, I can hear somebody cheering for me and not just my teammates and us just jumping around.”

Iowa State’s experience at the Fiesta Bowl will be different than Oregon’s. Unlike the Pac-12, the majority of Big 12 football games have included some fan attendance, not just friends and families.

Cyclones running back Breece Hall said the lack of a big crowd is not an excuse to slack off in the game.

“We’ve had to do it a couple of times this season,” Hall said. Obviously, it’s going to be different. You don’t have the crowd screaming. You don’t get that momentum from the crowd that you usually would. But you still have to play football.

“I feel like everybody on our team, we all have that competitive spirit. So really, not having fans and having fans, it doesn’t really faze us too much. We still want to come out and win the game and dominate.”

All of the sports world has had to adjust.

The Masters was played in November without the roaring galleries known to follow past major champions such as Tiger Woods, Jordan Spieth and Rory McIlory. This year, the Los Angeles Lakers, Tampa Bay Lightning and Los Angeles Dodgers were crowned champions of their respective leagues in bubble environments without fans or with limited attendance. The 2020 Boston Marathon, so synonymous with springtime in one of the United States’ most historic cities, did not occur.

Luckily, college football, one of the staples of American sports, was able to complete a season many media members expected to be shut down quickly. It took rescheduling of games and mass coronavirus testing but the season happened and provided some Americans with a sliver of joy in the midst of the chaos.

Just like the rest of sports in 2020, college football did not have the vibes it normally does. Stadiums were either empty or filled with a limited number of fans, and schedules were reduced to conference-only for some league or a limited number of non-conference games.

The college football postseason has been unusual as well. Many teams eligible for bowl games decided to decline and opt for players heading home to be with families for the holidays instead.

As of now, the Fiesta Bowl is on, and hopes to give the sports world some sense of normalcy.