By Gareth Kwok and James Johnston

Catcher Stephen Vogt and pitcher Luis Frías both tested positive for the coronavirus and were absent from workouts. Vogt’s positive test came during the team’s intake testing, while Frías’ test was several days before, Diamondbacks manager Torey Lovullo said.

The Diamondbacks are one of eight Cactus League teams to open on Wednesday. The other seven teams report Thursday. Due to COVID restrictions, fans will not be allowed to view workouts in-person during the spring and game attendance will be limited.

“We got a lot done today,” Lovullo said. “We had the first wave of pitchers throw their bullpens. The other half split up and worked on some positional stuff and fielding their position. We hit on a lot of the little things. I thought it was a very productive day, overall.” 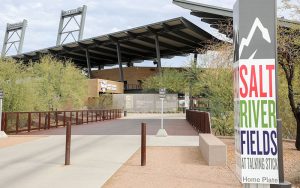 Due to COVID restrictions, fans will not be allowed to view workouts in-person at Salt River Fields during the spring and game attendance will be limited. (Photo by Alina Nelson/Cronkite News)

After a disappointing 25-35 record that left them at the bottom of the NL West in a shortened 2020 season, the Diamondbacks are still reminded of the frustrations of last year, especially losing 18 of 20 in one stretch.

“Nobody has certainly forgotten about (last season),” pitcher Madison Bumgarner said. “I know we are starting a new year and we have new goals for this year, but I think everybody certainly remembers what happened last year. Myself, included, underperformed as bad as anybody – maybe even worse than anybody.”

In his first season with Arizona, the left-hander is coming off arguably the worst year of his career. He went 1-4 with a 6.48 ERA and endured a month-long stint on the injured list due to a mid-back strain.

Bumgarner’s struggles epitomized the 2020 season for the Diamondbacks, but Lovullo says the pain and frustration from last year have put more of a chip on his shoulder than usual.

While the division rival Dodgers and Padres made a number of major moves to bolster rosters that made the postseason last year, the Diamondbacks were relatively quiet in the offseason, only making a couple of key acquisitions.

Lovullo said he is still getting to know Soria and isn’t ready to declare him the club’s closer yet.

“I’ve really enjoyed watching him from the other side and, you know, I’ve had a couple of conversations with him today that I’ve really enjoyed,” Lovullo said. “So, still, getting to know him is a priority to me, but for now I’m not going to go down that road.”

Meanwhile, Lovullo said that he thinks Vogt and Frías are recovering and “feeling well.”

Even with a full 162-game season scheduled, the positive tests are a reminder of the backdrop for baseball in 2021.

“It’s one of those situations where you know that you can’t let your guard down,” Lovullo said. “It’s still there, it’s still real and we’ve got to be mindful of it.” 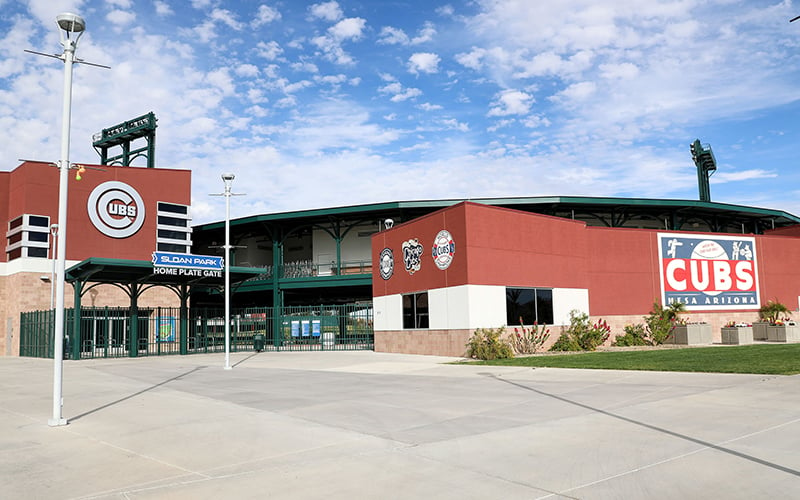 The plan to start spring training on time comes after MLB proposed to the Major League Baseball Players Association that spring training and Opening Day be delayed for a month to “allow for the level of COVID-19 infection rates to decrease and additional time for the distribution of vaccinations,” according to a Feb. 1 statement released by MLB.

However, the Players Association rejected the proposal, noting that the proposal “offers no salary or service time protections in the event of further delays, interruptions, or cancellation of the season.”