Often, it’s with his girlfriend. Occasionally, he’ll tune in at work. And with Phoenix on the verge of making the playoffs for the first time since the 2009-10 season, Suns games haven’t been this meaningful to Weinhold since he was in grade school.

He has just one problem: He can’t watch the games on his television.

“I always have watched all the games, but in the past I was like, ’They’re probably going to lose anyway, so I’m going to be wasting my time,’” Weinhold said. “So the fact that I can’t watch it where I would prefer to kind of sucks.

“My whole family uses YouTube TV, and we all watch the Suns.”

Unfortunately for Weinhold and his family, Bally Sports Arizona, which carries local broadcasts of the Suns, Arizona Diamondbacks and Phoenix Coyotes, is not available on YouTube TV.

The Weinholds aren’t alone. In Arizona and across the country, thousands of sports fans have been unable to watch their favorite local sports teams on their streaming service providers.

YouTube TV in February of 2020 announced that it could not come to an agreement to bring back any of FOX Sports Regional Networks’ 19 local stations, including FOX Sports Arizona, to the streaming service platform. FOX Sports Arizona became Bally Sports Arizona along with other networks owned by Sinclair Broadcasting Group.

Since Feb. 29, 2020, those local networks have been unavailable to stream on YouTube TV, even after the network rebranded on March 31.

To bring you 70+ channels, we have contracts with content owners that are periodically renegotiated. Sinclair Broadcast Group, owner of FOX Regional Sports Networks and YES Network, is one of the largest owners of local TV stations in the US.

Bally Sports and Hulu + Live TV, which made a similar announcement in October, also were unable to come to an agreement. Other streaming services such as Sling TV and FuboTV also do not carry the networks. AT&T TV is the only streaming service that presently carries Bally Regional Sports Networks.

Other local sports providers have been affected by the standoff, too. YES Network (based in New York), Marquee Sports Network (based in Chicago) – both of which are within Bally’s umbrella of networks – and NESN (based in Boston) are also unavailable on either YouTube TV or Hulu + Live TV.

And the Pac-12 Networks, which carry many Arizona State and University of Arizona sporting events, is also unavailable on streaming services like YouTube TV and Hulu, although the networks are carried by Sling TV and FuboTV.

In the eyes of Jason Gurwin, co-founder of the streaming news and reviews website “The Streamable,” the divorce between local sports networks and streaming services was predictable.

“Ultimately, it comes down to cost,” Gurwin said. “Local sports rights have continued to increase more and more over the last couple of years.”

Gurwin believes what has happened in Arizona and across the country has long been a storm in the making, pointing to the Diamondbacks’ recent 20-year, $1.5-billion television contract with Bally Sports Arizona as an example of how these “fixed” prices for viewing local sports have become too expensive for streaming platforms, and have made the cost of cable subscriptions pricier in the process.

Further exacerbating the problem is a diminishing television viewership audience, which has resulted in more viewers “cutting the cord” in favor of cheaper streaming platforms like YouTube TV.

Bally Regional Sports Networks did not respond to requests for comment.

On a local sports level, Gurwin notes that the numbers are even uglier.

“A lot of these services say that about 10% of their viewers ever actually tune into a regional sports network,” Gurwin said.

Gurwin attributes this phenomenon to a variety of factors, including the evolving viewing interests of certain age demographics and expanding array of sports content options for fans to feast on.

“The younger demographic, who has more entertainment offerings, are also people who are just generally not watching baseball,” Gurwin said. “There’s just many different ways that you can access sports now, even if you don’t want to watch a whole game in its entirety.”

Phillip Swann, publisher of the TVAnswerman.com and HomeTheaterTonight.com, agrees that regional sports network viewership has “a niche audience.”

But Swann, who has covered the television industry since the late 90’s, adds that the economics surrounding streaming services makes the situation even more complex.

“The streaming services have tight margins, meaning they barely make a profit due to lower subscription fees combined with high carriage fees paid to programmers,” Swann said. “The regional sports channels are watched by a minority of the audience, mostly rabid sports fans. The streamers risk alienating that audience, but the risk is minimized because four major streamers are not carrying them; only AT&T TV carries them.

“Consequently, it’s less likely a YouTube or Hulu subscriber will drop it because AT&T TV is the only streaming alternative. And AT&T TV’s plan that includes the regional (sports networks) cost $20 a month (more) than YouTube TV, Hulu and FuboTV.”

Gurwin agrees with Swann’s assessment on the situation.

“It’s this vicious cycle where costs go up, fewer people need a bundle to get the content, so a fewer set of the people who are actually watching it are actually watching teams like the Diamondbacks, which ultimately for someone like a YouTube TV or a Hulu +Live TV, it makes less sense to carry that channel,” Gurwin said.

Cable companies, for the most part, have retained these local sports channels. This, Gurwin said, is because cable companies have been able to “make their money elsewhere.”

But not every cable company has been able to retain local sports networks like Bally Sports Arizona. In July of 2019, DISH TV dropped all Bally Sports Regional Networks.

Bradley Young was one of the many Arizona sports fans affected by the move. Young has attended Suns games every year since he was 2 years old, often going with his grandfather.

Now, since DISH does not televise Bally Sports Arizona, Young mostly catches Suns games on the radio. He doesn’t mind the inconvenience as much since Young has fun listening to Suns’ radio voice Al McCoy’s call of the games. 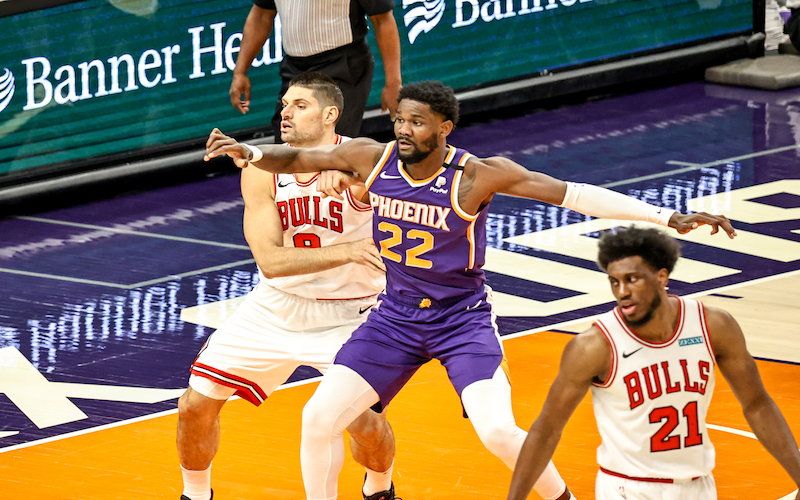 Even though the Phoenix Suns are one of the top teams in the NBA, many longtime viewers of their games are missing out because they are using streaming services. (Photo by Alina Nelson/Cronkite News)

“When I was a kid, I used to always listen to (the Suns) before going to bed,” Young said.

Weinhold has also had to find an alternative solution to following Suns games. But unlike Young, Weinhold’s methods have been more nefarious.

“I’ve just been relying on unreliable streams on the internet,” Weinhold said. “I’ve got (my family) doing the same thing, using websites and (streams) like that to watch the games.

Help might be on the way for Young, Weinhold and thousands of other fans.

In January, Sinclair executive vice president and CFO Lucy A. Rutishauser talked about the upcoming app, announcing at a conference that “The viewing experience will be significantly better. It will (be) enhanced, personalized, interactive. It will have new features, new capabilities, new content around sports, sports betting, the super fan…free to play (betting), rewards, community-based, gamification, stats.”

The announcement from Rutishauser came before Sinclair delayed the app’s release until 2022. But for Gurwin, the potential in-game betting aspect to the proposal is something which he believes could help make regional sports networks more profitable moving forward.

In Arizona, sports betting is currently outlawed. But on Monday, the state senate approved a bill, SB 1797, by a 23-6 margin which would legalize online sports betting and set up sports betting sites at or near sports stadiums, golf courses and race tracks.

“Sinclair’s CEO, when this was announced, said that the regional sports networks and sports betting go hand in hand, because the more people who are betting, the more people who are watching regional sports networks,” Gurwin said. “Purely (from) a logical perspective, it makes sense that if you think that something will increase viewership, you find ways to get people to do that.”

Sports betting is a potential financial solution, but Gurwin adds that Sinclair would likely lose money if the company were to concentrate on a direct-to-consumer approach. He believes that if the regional sports network economy started from scratch today, their business profits would look much different.

“It’s really hard to build a direct-to-consumer business that is going to be able to recoup the same revenues that they’ve been able to do (with) the cable bundle,” Gurwin said. “If this business started today and we didn’t have a cable bundle, local sports rights would be worth a lot less.”

Gurwin and Swann insist that the streaming services and regional sports networks are not close to striking a new deal, meaning local die-hard fans, like Weinhold and Young, will continue to suffer the consequences.