Chandler Unified School District Governing Board member, Lindsay Love, was admonished last week at a board meeting by fellow Board member Joel Wirth, for her repeated attacks on community members. At issue this week was her use of the term “house slave” among other epithets to describe a local radio talk show host. 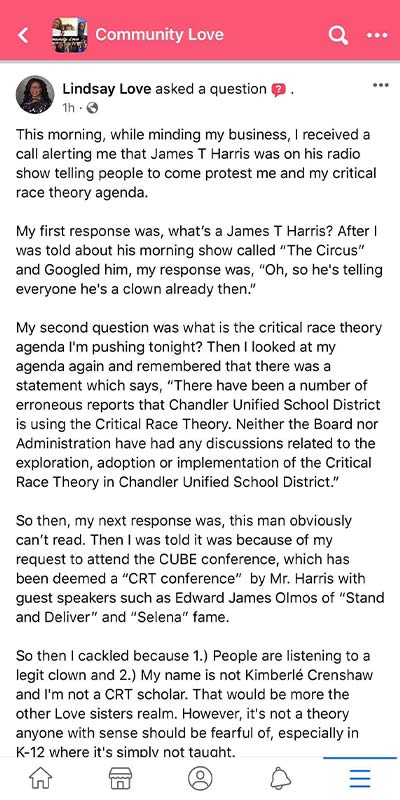 Love, an African American, launched a Facebook attack on KFYI News Talk 550’s James T. Harris, who is also an African American after he discussed her request for funding to attend a conference in Atlanta featuring Critical Race Theory.

Harris, a conservative radio talk show host, questioned Love’s request in the wake of the District’s continued denial of offering Critical Race Theory-based curriculum and state’s the public schools’ continual cry of poverty and the need for more taxpayer money.

Harris previously worked several years as a history teacher and is an outspoken opponent of racial equity training or CRT programming. As part of that opposition, Harris has featured an interview Love conducted for the Arizona School Board Association of radical presenter Calvin Terrell.

In that interview, Love gushes over Terrell as he discusses decolonization, the necessary pain white people will feel as the decolonization process plays out, and the fact that he would have never expected to be invited to present his radical views to educators in a Red State like Arizona.

Harris shared the interview with his audience a number of times as part of what he says is his effort to engage parents in the education of their kids and assure them that they are not alone in their concerns for their kids and with the radical pedagogy.

Love, a licensed clinical social worker who was elected to the CUSD Board in 2018, called Harris out on Facebook, identifying him as a “clown,” who is being used by “these Purples for Parents and their affiliate hate groups” to “weaponize the community against black women in leadership as they do with any BIPOC…It goes back to slavery.”

Love even went so far as to compare Harris’s opinions with the character of Stephen, a house slave, in the movie Django Unchained and suggested he “honor our ancestors by liberating yourself.”

This is not the first time Love has made such inflammatory allegations. She frequently attacks parents who express any opposition or concerns about the District as “racists” and “haters.”

“It is a shame that this black man is using his platform to incite violence towards me, another black person, whom he has deemed expendable in his goal towards acceptance. But this happens to black women all the time; we get hurt by the very people we are fighting for all the time,” Love wrote, contending Harris makes a conscious choice “to be a token amidst a sea of other options.”

Love also suggested Harris is a tool of “hate groups” and supports parents getting involved with district board operations because it gets him approval from his white audience. But underneath his actions, wrote Love, “is a deep generational trauma” which she sees as part of “the Post Traumatic Slave Syndrome.”

“You don’t have to be a clown anymore,” Love wrote of Harris. “You can pack up the circus and go home. You can seek out a therapist to discuss your internalized racism and your hate for black women.”

Harris observed on Facebook in response to Love that she “lords over the Chandler Unified School Board” by “holding them hostage with her weaponized blackness.” “From her post,” Harris said, “she seems to be the consummate victim and a proponent of Critical Race Theory.”

After the meeting, Love also alleged Wirth acted unprofessionally toward her during the meeting, adding “it is not an uncommon” occurrence.

Wirth, a soft-spoken former CFO of the District, rarely says anything negative about anyone. His comments during the June 9 meeting were considered brave and out-of-character. He merely said that he is “incredibly saddened” by recent changes on the board, noting Love was using social media to help create “an absolute firestorm” and a “huge divide within this district.”

In response, Love hurled yet another accusation saying that people “will try to weaponize communities against black women in leadership and it needs to be called out.” Love also alleged Wirth acted unprofessionally toward her during the meeting, adding “it is not an uncommon” occurrence.