WASHINGTON – The Department of Homeland Security began requiring proof of COVID-19 vaccination over the weekend for essential as well as nonessential travel across the U.S.-Mexico border.

The tougher requirement that took effect Saturday had been expected since last fall, when the government reopened the border to nonessential travel after nearly 20 months of pandemic restrictions. But it raised concerns anew among officials in border towns, who are still reeling from the economic hit they took during the previous shutdown.

“Unfortunately, from an economic perspective this could negatively impact businesses and our local community, which will hinder essential workers that play key roles in keeping our economy going,” Douglas Mayor Donald Huish said in a statement Monday.

Huish acknowledged that the stricter vaccination requirements make sense on a larger scale to prevent transmission of COVID-19 between countries, a point echoed by some shopkeepers in border towns.

“It is good that they are going to ask for vaccine documents,” said Evan Kory, an owner of Nogales clothing store La Cinderella, adding that business “is a little better right now because they finally opened.”

But most of his customers were already taking precautions, he said. 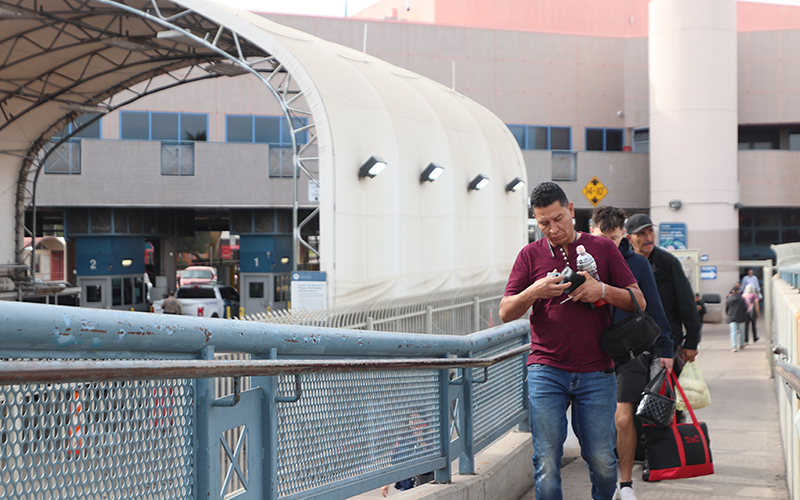 Reopening of border is both exciting and low-key in Nogales

“We have seen here in the store that many people, the majority, come with a mask, and they are very respectful of that,” Kory said. “So, it’s all we can do while the situation improves.”

The U.S.-Mexico border was closed to nonessential travel from March 2020 through Nov. 8, 2021. While returning U.S. citizens, truckers and health care workers were among those considered to be essential travelers, tourism and recreation travel were defined as nonessential and barred for those 20 months.

As a result, tourism travel from Mexico to Arizona fell 43% from 2019 to 2020, and tourist spending fell by more than half, from $1.37 billion to $613 million in the same period, according to data from the Maricopa Association of Governments.

The number of people crossing the border at Arizona ports of entry fell from 24.8 million in 2019 to 15.8 million passengers in 2021, said Edith Serrano, a spokesperson for the Customs and Border Protection office in Tucson.

Serrano said Monday that wait times at the border could increase slightly as officers adjust to the new rule, but that otherwise traffic at ports has been moving smoothly since being opened for nonessential travel.

The rule exempts those 18 and under who are traveling with a vaccinated adult, those with medical conditions that prevent them from getting vaccinated and those who are participating in COVID-19 clinical trials.

The new rule comes as Arizona is seeing a surge in new COVID-19 infections, driven by the omicron variant. New daily cases more than tripled from 8,220 on Jan. 1 to 27,681 on Saturday. Infection rates over the past two weeks rose by 131% in Cochise County and by 203% in Santa Cruz County, according to a New York Times analysis of Centers for Disease Control and Prevention data.

The Arizona Department of Health Services said 56.1% of state residents were fully vaccinated as of Monday, while Homeland Security said said 55.9% of Mexicans had been fully vaccinated by October, with rates approaching 72% in communities near the border.

Kory said it is “frustrating that there are many people” who do not want to get vaccinated, but he hopes that improves over time. In the meantime, he said, he is optimistic for the economic and physical health of his town.

“We just have to keep taking care of ourselves and see what happens, day by day,” he said.

About Cronkite News 3993 Articles
Cronkite News is the news division of Arizona PBS. The daily news products are produced by the Walter Cronkite School of Journalism and Mass Communication at Arizona State University.