MEXICO CITY – A house is not a home.

The Arizona Cardinals were supposed to adopt Estadio Azteca as their home field for their Monday night matchup against their division foe, the San Francisco 49ers. Yet the historic stadium changed ownership when the Niners faithful took over the 87,523-capacity stadium to help propel San Francisco to a 38-10 victory.

From pre-to-postgame, the 49ers and their fans controlled the game’s tone and mood. Fans with scarlet and gold jerseys, Lucha masks and flags filled Aztec Stadium with thunderous cheers for what was meant to be the away team, and offered deafening boos for the assigned home team.

“I know the 49ers fans travel well,” said Cardinals quarterback Colt McCoy, who started in place of Kyler Murray for the second time. “They were pretty loud. We went on the silent count most of the night.”

The conclusion of the 2022 NFL’s International Series was a Super Bowl-esque event. The 78,427-crowd featured stars like pro-wrestler Pénta El Zero Miedo and super middleweight boxing champion Canelo Alvarez, who took part in the coin toss.

Mexican singer and songwriter Sofia Reyes performed a well-received rendition of the Mexican national anthem, “Himno Nacional Mexicano,” which led to loud chants of “Mexico” echoing throughout the stadium.

“That anthem was really cool,” 49ers quarterback Jimmy Garropolo said. “I haven’t played in an atmosphere anything like this. It was electric. Fans were nuts. They were cheering throughout the whole game, which (felt) like a soccer game at some points.”

Before kickoff, ESPN’s John Sutcliffe gave an electrifying speech in Spanish that fired up attendees, resembling Dwyane “The Rock” Johnson’s monologue before the 2022 Super Bowl.

Then came the halftime performance by Latin Grammy Award winner Grupo Firme. The crowd treated the group like they were the Cardinals, loudly booing them throughout their performance.

That was the theme of the night.

Mexican fans traditionally exude passion for a team, player or artist they adore or despise. When they feel something, they don’t disguise their emotions.

“Man, I love San Francisco but if we couldn’t be there, I would love to be here,” 49ers coach Kyle Shanahan said. “This place is awesome. That was one of the coolest experiences I’ve been a part of.”

The impassioned fans provided a college football atmosphere and an NFL postseason feel. 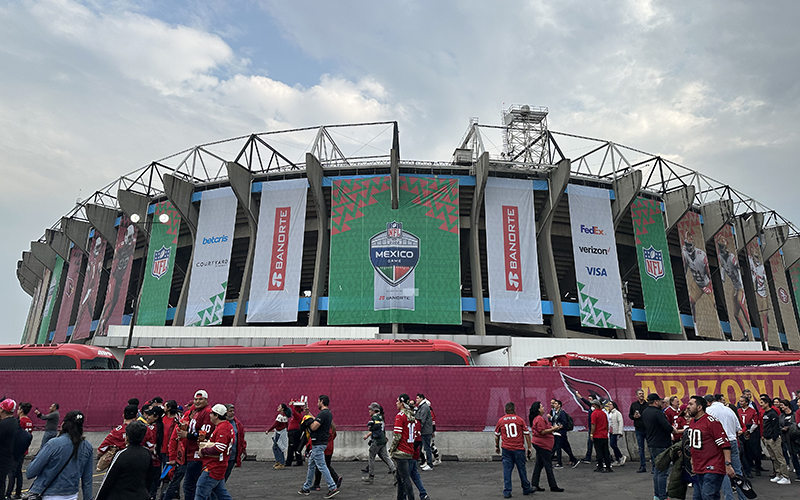 Estadio Azteca served as the venue for the NFL Mexico game between the Cardinals and 49ers. This was the NFL’s first game in Mexico City since 2019. (Photo by Derrian Carter/ Cronkite News)

The crowd went berserk on all five 49ers touchdowns, and when the Cardinals faced third and fourth down, and when San Francisco punted in excellent field position, and when the 49ers kicked kickoff touchbacks. Fans did the “wave” and sang hit songs, including Bon Jovi’s “Livin’ on a Prayer,” many times throughout the game.

The fans gave defensive end Nick Bosa a standing ovation after he sacked McCoy to end the first half. Then, the Niners faithful showered wide receiver Deebo Samuel with “Deebo” chants after his 39-yard touchdown run in the third quarter.

“Man, it was incredible,” said Warner, the 49ers linebacker. “One of the best experiences I’ve been a part of, seriously. This entire game, it almost felt like a playoff atmosphere.”

San Francisco embraced Mexican culture when 49ers wide receiver and Arizona State alumnus Brandon Aiyuk did the salsa after scoring his first touchdown. SF tight end George Kittle brought a taste of America when he spiked the ball in the end zone after scoring two touchdowns.

Mexico has over 48 million NFL fans, and it sounded like most of them were packed into the multi-purpose stadium, turning it into a fiesta. They were craving live NFL football, and Monday’s game strengthened their love for the American sport.

This was the NFL’s first game in Mexico City since 2019. It was the fifth NFL game held in Mexico and was the rematch of the league’s first regular-season game held outside of the United States in 2005.

Besides wishing his team played better, Cardinals coach Kliff Kingsbury had to deal with off-the-field issues over the weekend in the City of Palaces. The Cardinals sent Sean Kugler, the team’s offensive line coach and running game coordinator, home Monday before the game, then fired him Tuesday after he allegedly groped a woman in Mexico City on Sunday night, ESPN reported. Kugler is the second Cardinals assistant coach to be accused of assaulting a woman this year.

The Cardinals return to their true home stadium Sunday, hoping to put both matters behind them as they host the Los Angeles Chargers.

“We’ve got to flush it,” Kingsbury said. “We’ve got a short week with the Chargers coming in … We know we’ve got to play a lot better.”

By then, the harsh ringing in the Cardinals’ ears should be gone.