Over the last several days, the campaign signs of Republican State House candidate Liz Harris have been vandalized by Black Lives Matter activists who have been spraying adhesive over the candidates face on the sign, then attaching paper signs that read: 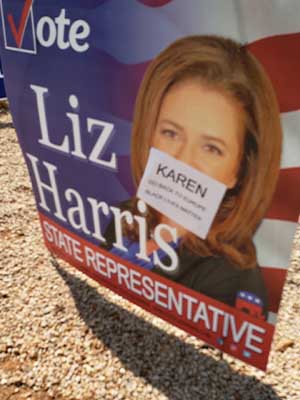 “It is pretty awful to know that my signs are being targeted just because of my race. I’m not from Europe, I’m originally from the East Coast and Arizona has been my home for more than two decades.” said Harris, commenting on the vandalism.

Because of the adhesive being used, removing the paper also removes much of the picture underneath, and much of the time the paper cannot be completely removed, so the signs will end up needing to be replaced.

Harris’ campaign asked that anyone with information about this crime please contact the police or the campaign through VoteLizHarris.com.

Harris is one of two Republican nominees for State Representative in District 17.