Last Monday, I wrote about scorpions (see reference below). This time I continue with some related, scary-looking, but harmless arachnids, the vinegaroons and sun spiders.

Vinegaroons are also known as whip scorpions. There are both tailed and tailless varieties. Although they may look formidable, they lack venom and are harmless.

Although the vinegaroons lack venom, they have the ability to spray you from an opening near the tail, with acetic acid (vinegar), and a solvent that attacks the exoskeleton of insects. You can handle them (see here to gauge the size compared to the hand holding one). They are usually three to four inches long and black to dark brown.

They have four pairs of legs, but the front pair of legs are modified to act as feelers. These front legs resemble whips and are covered with many fine hairs. Vinegaroons feed mainly upon insects.

These animals occur throughout southeastern Arizona and Sonora, usually at higher elevations. They may be found under rocks, tree bark, or in debris. Like scorpions, the young ride on mom’s back (see here).

Sun spiders are not spiders but Solpugids (or solifugae). They are also known as wind scorpions. 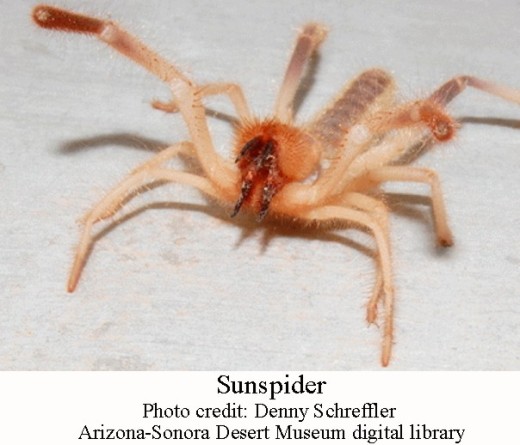 Sun spiders lack venom and are harmless. They are usually one to three inches long, yellow to tan, and very hairy. They have eight walking legs, long club-like pedipalps and large, muscular chelicerae (jaws). The tips of the chelicerae are equipped with pairs of very formidable pincers. See several close-up photos here. Sun spiders are very fast, voracious predators. Like vinegaroons, the front pair of legs are used as feelers.

Sun spiders occurs throughout the world, mostly in tropical to subtropical areas, but they also occur in deserts.

Sun spiders prey upon insects, other arachnids, and small vertebrates, including lizards. Sun spiders are nocturnal, and good diggers. They spend most of their time underground. They are most active in Arizona during the spring and summer. I occasionally find one in my house. I generally leave them alone because they will hunt down insects, spiders, and scorpions.

Mating involves a “dance” and stroking. The male will turn the female over and deposit sperm, which the female can store for later fertilization. She will dig a burrow and deposit up to 100 eggs, but does not care for them.

Old world varieties of sun spiders, some known as camel spiders,(the subject of some wild urban legends) can get very big, about six inches long.

One other critter with “scorpion” in its name is the Chernetid Pseudoscorpion or “book scorpion.” See Wikipedia information and photos here. “Pseudoscorpions were first described by Aristotle, who probably found them among scrolls in a library where they would have been feeding on booklice.” This little animal lives wherever organic matter has accumulated, such as leaf litter or within a rotting saguaro cactus. The local variety of pseudoscorpion is venomous, but is too small to bite, it is generally between one-sixteenth to one-eight of an inch long.