Many animals try to eat horned lizards, but the lizards have some clever defenses.

Horned lizards range from southern Canada, through the western U.S., Mexico, and Guatemala. There are 16 or 17 species (depending who is counting). Seven species occur in Arizona. The most common near Tucson is the Regal horned lizard, and the largest is, of course, the Texas horned lizard. The regal horned lizard has a crown of ten horns, four large occipital horns and six smaller horns on each side. Horns on the head are part of the skull, whereas, body horns are specialized scales. These lizards are harmless to humans. 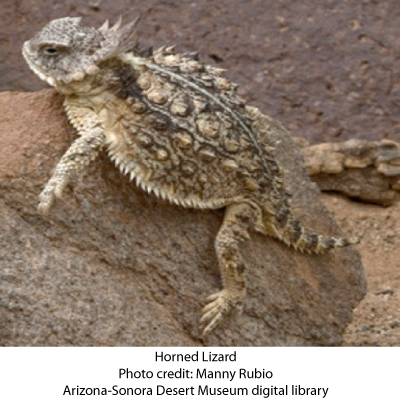 Horned lizards eat insects, mainly harvester ants. These ants are rather nasty because they bite and are very tenacious at holding on, and they sting, injecting venom. The lizard will capture the ant by placing its sticky tongue on the back of the ant and scooping it up very quickly. Abundant mucous in the lizard’s throat and esophagus usually prevents stings and bites.

Horned lizards are preyed upon by snakes, other lizards, birds of prey including the road runner, grasshopper mice, bobcats, foxes, and coyotes. The lizard has developed an array of defense tactics depending upon each type of predator and whether that predator likes to swallow prey whole or chew it up.

The first defense is camouflage. Horned lizards’ color pattern is designed to blend into the background. They can change their color tone from light to dark and back again. The lizard often pretends to be a rock. It often tucks its head and limbs, and hunches its back to enhance the rock resemblance. But if induced to run, the lizard will run a short distance and freeze again, trying to re-establish its invisibility, hoping the predator will lose sight of it. Sometimes the lizard will flip over on its back, thereby presenting a completely new, lighter color to the predator. The flat body is designed to be close to the ground so that the lizard does not caste a shadow as would a round-bodied lizard.

The second defense is to appear inedible. The lizard can puff itself up with air to appear too big to eat. It will face a predator with its array of horns which can be manipulated to point forward or backwards. Snakes like to swallow prey head first (because legs fold backwards), but might find this difficult with forward pointing horns.

Horned lizards can apparently distinguish the type of snake that is after it. With relatively slow- moving rattlesnakes, the lizard will sit and wait until the snake is near, then run away. Rattlesnakes don’t usually pursue their prey.

Whipsnakes and coachwhip snakes, however, are very fast and do pursue their prey. Horned lizards almost never run away from these snakes, to do so would be futile. Instead, the lizard spreads its back and tilts upward , presenting a spiny shield to the snake’s face. This makes it difficult for the snake to get its jaws around the lizard.

Horned lizards can squirt blood from their eyelids. The lizard causes the eyelids to become engorged with blood and can suddenly shoot a thin stream up to six feet away. The lizard will use this defense as a last resort mainly against canines. The lizard attempts to squirt the blood into the predator’s mouth.

Apparently it tastes very, very, bad to a canine. (Human researchers who go around tasting the blood, yes there are some, say it doesn’t taste that bad to them, but it takes a long time for the taste to dissipate.)

There is one other curiosity about the horned lizard. Go back and look at the photo above. See the white spot on the top of its head? Here is a closer look. 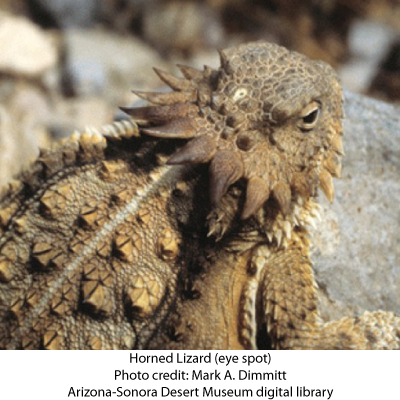 That white spot is called the “third eye.” This is apparently a blind, light-sensing organ, perhaps used to help the lizard regulate its time in the sun, thus regulating its body temperature. Some researchers speculate that it helps the lizard determine the seasons, i.e., when to mate. Note also the position of the eye and brow ridge. Does the back of the head look like the front of a face? That could confuse predators.

A horned lizard is the state reptile of Wyoming and Texas.

By the way: there is one species of horned lizard in Australia called the Thorny Devil lizard, take a look, it’s rather flamboyant:
http://www.factzoo.com/reptiles/lizards/thorny-devil-lizard.html

Sources:
Information for this post came from the Arizona-Sonora Desert Museum and from a lecture by Dr. Wade Sherbrooke, a long-time lizard researcher.