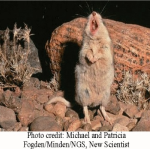 Mice will eat just about anything, but most prefer plant parts. The grasshopper mouse, however, is a ferocious carnivore. It eats grasshoppers, beetles, spiders, centipedes, millipedes, worms, lizards, scorpions, snakes, and other mice. In the photo below, it is eating a bark scorpion. The grasshopper mouse is apparently immune to scorpion venom and is now the subject of a study on how the mouse deals with the venom (see press release for study here). 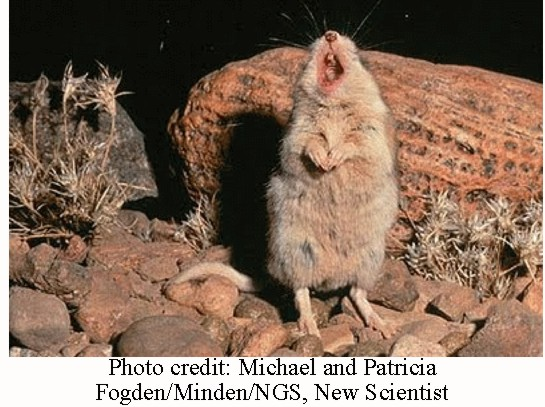 The grasshopper mouse hunts like a cat and defends its territory by howling – it is the mouse that roars. 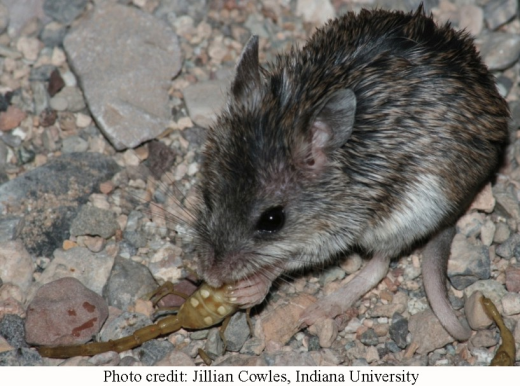 There are several species and most inhabit the grasslands of the great plains, but at least one species is a desert dweller. The Northern Grasshopper mouse has a range from Canada to Mexico, and California to Minnesota; the Southern Grasshopper mouse has a range that includes parts of Nevada, Arizona, New Mexico, and Texas. The southern species is gray-brown- to cinnamon-colored with a short white-stripped tail. Most grasshopper mice are relatively stout compared to other mice. The head and body is 3.5″- to 5″ and the tail is 1″ to 2.5″ long.

Usually, a male-female pair live together and defend a territory. They mark their territory with musk.

Grasshopper mice have very strong jaw musculature required for killing prey, and they learn quickly how to deal with various prey. One observer describes how the mouse dealt with a 3-inch scorpion in Arizona: “The mouse would first nip the tail so that the stinger was ineffective. It would then stand the scorpion on end, holding it with its front paws, and methodically eat the writhing creature head first.”

The grasshopper mouse is a nocturnal hunter, a good climber, and active year round. In some areas, scorpions account for almost their entire diet.

These mice will eat seeds, grasses, and grains, and cache them, like other mice, but about 90% of their diet is animal matter. The strangest part of their diet is sand. Biologists think the mice eat sand to aid in digestion, just like some birds ingest gravel.

The mice have several vocalizations. You may have heard their territorial proclamation and mistaken the high-frequency sound for that of an insect. So now, when you are out at night, listen for the mouse that roars. (See short video of vocalization here.)

For a video of a battle between a grasshopper mouse and a very large centipede click here. Note that centipedes are venomous. To see a video of the mouse versus a giant hairy scorpion click here.