The Pack Rat (Neotoma albigula), also known as the White-throated wood rat, has been in this region for at least 50,000 years. And it has been collecting things. 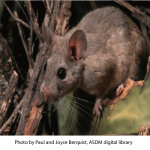 Pat rats are troublesome around one’s home because they will eat insulation from automobile wires and get into the walls of a house. However, their habits have made them good desert archaeologists.

The pack rat measures 8 inches long, head and body, and the tail is another 5 to 7 inches. The tail is covered by loose skin which can be shed to escape a predator. Pack rats are usually solitary.

A pack rat nest is a loose conglomeration of twigs and grass, fortified against predators with cactus parts, especially cholla. The nest consists of tunnels and chambers with separate areas for food storage, sleeping, nursery, and waste products. There are often many insects in the nest feeding on collected plant material. Kissing bugs also inhabit the nest and feed on pack rat blood.

Currently, the pat rat obtains nourishment and water mainly from feeding on prickly pear cactus. Its kidneys have evolved to deal with and excrete oxalic acid derived from the cactus. It is one of the few animals that can do this. That ability, and its habit of collecting things, is what makes the pack rat a good desert archaeologist (See my article Cactus water will make you sick for an explanation of oxalic acid).

The pack rat places his collectibles in the waste chamber and urinates on them (instead of going outdoors where it would be subject to predation from Great Horned owls, snakes, and coyotes). Because of the high calcium oxalate content, the urine solidifies and preserves the collection in a hard resinous or vitreous-looking material called a midden. The midden looks much like peanut brittle, or a chocolate bar filled with nuts, but that’s another story which I tell below.

The midden is a layered material preserving leaves, sticks, seeds, and other plant parts, bones, stones, feathers, and everything else the pack rat collects, usually from within a 100-foot radius of the nest. At the Fort Bowie National Historic site, a set of false teeth found in a pack rat nest is on display. One can excavate and date the layers (usually by the C14 method) to see when certain plants first appeared in the region. The urine acts as a bactericide, so the organic material is preserved. Some midden material from western Arizona has been dated as old as 40,000 years.

There are some nests in the Tucson Mountains that have been continuously inhabited for the last 5,000 years. One nest near Contzen Pass off Picture Rocks Road has been dated at 21,000 years old. At that time, the area that now has saguaros and palo verde trees, had junipers and oak trees.

Study of middens near the Waterman Mountains (the range on the west side of Avra Valley), shows that 11,000 years ago, the area was a woodland forest with pines and oaks. Study of fossils from middens show that the desert has come and gone many times. Since the last glacial epoch, as temperate forests retreated to higher elevations, plants from much farther south migrated northward. Analysis of midden material indicates that mesquite trees arrived in southern Arizona about 15,000 years ago, saguaros about 8,000 years ago, and Foothills palo verde trees about 4,000 years ago.

That other story, paraphrased from the Arizona-Sonora Desert Museum magazine, Sonorensis, Fall 1983, is about a first encounter with midden material:

In the 1849 gold rush, a group of emigrants crossed the inhospitable Mojave desert from Utah to California on a journey that nearly ended in disaster in Death Valley. When the party became desperate for food and water near Papoose Lake in southeastern Nevada, a search party split from the main group. In a nearby canyon, they came to a high cliff and in its face were niches or cavities as large as a barrel and in some of them, found balls of a glistening substance looking like pieces of variegated candy stuck together. It was evidently food of some sort, and they found it to be sweet but sickish. Some made a good meal of it but were a little nauseated afterwards. Yum!