Great Horned Owls inhabit my neighborhood, but I rarely see them because we keep different hours, and they are masters of camouflage (see photo at the end of this article). However, I often hear them early in the morning just before sunrise. They have a distinctive sound – a loud, penetrating “hoo hoo”, similar in cadence to, but deeper than a Mourning Dove. They are the only owls that actually go “hoo-hoo.” Listen to their sounds at the Cornell Lab of Ornithology here  (Scroll down and click the “sound” tab). See 84 photos at the Arizona-Sonoran Desert Museum digital library here. 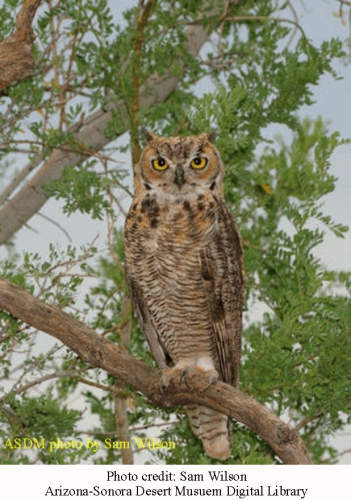 The Great Horned Owl ranges from the boreal forests of Canada and Alaska to the southern tip of South America. They seem to prefer open, second-growth forest, agricultural areas, and suburban areas. The Great Horned Owl is the third largest owl (the Snowy Owl and Great Grey Owl are bigger), with a length of 15- to 25 inches and a wingspan of up to 5 feet. These owls can weigh over 5 pounds. Females are bigger than males.

Males and females have similar plumage, but that varies regionally. According to The Sibley Guide to Birds, “Females average browner and more heavily marked than males. Eastern birds are richly colored. Birds in the western interior region are generally pale and grayish in tone….” The facial disk (which helps focus sound) is orange to gray and sets off yellow eyes.

The “horns” are actually tufts of feathers which can be erect or flat on the head depending on the mood of the owl. From my experience with owls, these tufts are most often erect when the owl is on the alert.

The Great Horned Owl will prey upon anything it can catch and that includes mammals, other birds, reptiles, and amphibians. In the Southwest, cottontail rabbits and jackrabbits are favored. The Great Horned Owls are the only owls known to prey upon skunks, perhaps because they have a poor sense of smell.

Great Horned Owls do not build their own nest, but instead, seek out the nests of other birds such as hawk nests, squirrel nests, tree holes, rock crevices and nooks in buildings. They begin nesting in January or February and will have up to 5 eggs at a time.

Typical life span in the wild is 13 years, but they have lived as long as 38 years in captivity.

Above, I wrote that these owls are masters of camouflage and the photo below is an example. Find the Great Horned Owl in the photo. The photo was published in the British paper, Mail Online, which was featuring the photography of Art Wolfe. The 23 photos, taken over a period of 35 years, show how well animals can vanish into their environment. See the 23-photo collection here.