The pods are falling; now is the time to gather them up, but be quick, many animals, including a bunch of insects, feast on the pods. Better yet, get them while they are still on the tree, but hard and golden. 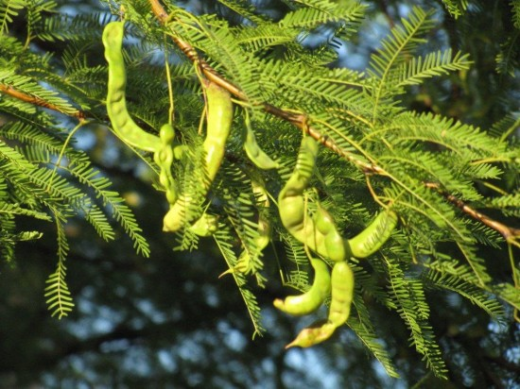 Mesquites co-evolved with large herbivores such as mammoths, mastodons, and ground sloths, which ate the pods and dispersed them widely. When these Pleistocene animals became extinct, mesquites retreated to flood plains and washes where water and weathering scarified the seeds and aided germination. The introduction of cattle helped to expand the range of mesquites once again.

Mesquite beans are usually harvested after they turn hard and golden. Both the pods and the seeds (which are very tough) are ground into meal. The native people sprinkled the ground meal with a little water to form small, round cakes. Later, slices of dried cake were fried like mush, used to thicken stews, or eaten raw. The meal is also used as flour to make flat bread. Mesquite meal is gluten free.

The pods of mesquite beans are very sweet and the sweetness comes from fructose which doesn’t require insulin to be metabolized. You can chew on a pod to test its sweetness. The seeds contain about 35% protein, much more than soybeans. Mesquite pods contain about 25% fiber. Some research suggests that mesquite meal, with a low glycemic index of 25, helps regulate blood sugar.

Mesquite flour is used to make a refreshing drink. If allowed to ferment, a mixture of water and mesquite flour produces a fizzy alcoholic drink.

Mesquite flowers are collected and boiled to make tea. The flowers are also roasted and pressed into balls as another food source.
The smoke of mesquite wood, used as firewood to broil meat, imparts a nice flavor.

The black tar or sap of mesquite trees can be boiled and diluted with water to make eye wash and an antiseptic for open wounds. It was also used on sore lips, chapped skin, as a sunburn lotion, and as a treatment for venereal disease.

A liquid made from boiling the inner bark of the tree was used as a laxative and as an emetic.

Tea made from mesquite leaves was used for headaches and stomach trouble. This tea also was used to cure conjunctivitis and to heal painful gums.

The Pima Indians used the black tar as a hair dye. This involved boiling the tar and applying the mixture to the hair, covering the hair with mud over night, then thoroughly washing the next morning. Resin from the tree was used as glue to mend pottery, or when boiled and diluted, as paint for pottery. The inner bark of the tree was used for basketry.

Mesquite wood is used by artisans in southern Arizona to make some beautiful furniture.

If you collect fallen bean pods, you may notice small holes in the pods. These holes are made by tiny bruchid beetles, which infested the fallen bean as larvae, when it was green and tender. The holes were made by the mature beetle getting out of the bean. Some mesquite bean collectors heat the beans in the oven to kill any beetles that may still be in the pods. Don’t worry though, the beetles just add more protein. Another insect found commonly with mesquite trees is the Giant Mesquite Bug which goes through five very colorful stages.

You can find descriptions of the three mesquite varieties, photos, tips on collecting, and recipes from Desert Harvesters.