Could the offices of the Arizona Daily Independent in Oro Valley be sitting on a gold mine? Oro Valley lies a few miles north of Tucson and a river runs through it, sometimes. The “river” is a large dry wash running along the west side of the Santa Catalina Mountains called Cañada del Oro (oro = gold). The name derives from placer gold found in the alluvium along the wash. Placer gold, gold flakes and nuggets, is derived from veins somewhere else and transported from its source and becomes mixed with alluvium. That “somewhere else” is in the Santa Catalina mountains, somewhere.

Canada del Oro begins in the northern Santa Catalina Mountains and flows northwest, but once out of the mountains the river takes a sharp left turn to flow southwest, past Saddlebrook and Catalina, through Oro Valley and on to the Santa Cruz river. 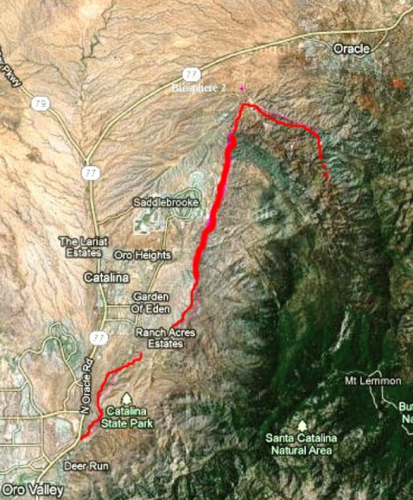 Below are two descriptions of the placer deposits along Canada del Oro from the geologic literature. They report gold content in cents or dollars per cubic yard, so a note on gold prices is in order. In the U.S., from 1792 to 1834, the gold price was $19.75 per ounce. From 1834 to 1934 the price was $20.67 per ounce, then $35 per ounce until 1973 when the price was allowed to fluctuate with the market. Within the descriptions I will put [brackets] showing what the ore would have been worth at the current price of about $1,250 per ounce.

“An area of 25,000 acres … 4 to 10 miles south from Oracle post office and 16 to 29 miles north from Tucson, is found containing valuable dry placer gravel, which has apparently been deposited at intervals by floods from the Santa Catalina Mountains so as to form a deposit of nearly equal value from surface to bedrock, there being no pronounced accumulation of heavy gold at bedrock except in the stream, Cañada del Oro Creek, which passes through the region. The bed of dry gravel is from 6 feet deep at the creek side to 252 feet at the summit, with an average thickness of about 150 feet. The deposit is in general a loose gravel, uncemented. There are, however, alternating strata of deep red, clayey material. These strata are of nearly uniform thickness of 3 to 4 inches and probably were formerly surfaces existing between floods, each being covered by a later flow of gravel from rainfall eroding veins farther up the mountain. Shafts sunk on the hillsides from 27 to 50 feet in depth show values from 10 to 42 cents [$6.04 to $25.40] per cubic yard. The average is difficult to determine, as the gold is not equally distributed. All the gold found is in well-rounded nuggets ranging from 50 cents to $5 [$30.24 to $302.37] in value. There is a tradition of a lump weighing 16 pounds [as much as $300,000], with probably 40 per cent of quartz, whose discoverers were found murdered in their camp 16 miles north of Tucson. The nugget had disappeared. In fineness the gold averages about 0.905.”

A general description of the geology and speculation on the source of the gold comes from Eldred D. Wilson, Gold Placers and Placering in Arizona, State of Arizona, Bureau of Geology and Mineral Technology, Geological Survey Branch (precursor to the Arizona Geological Survey), Bulletin 168, originally printed in 1961:

“The Santa Catalina Mountains are made up principally of Precambrian gneiss, schist, and granite; Paleozoic beds, post-Carboniferous granite, granite porphyry, diabase, and diorite and Tertiary sedimentary rocks and lavas. Gold-bearing quartz veins, such as occur in the vicinity of the Copeland, Kerr, Matas, and other prospects in the upper reaches of Cañada del Oro, were the probable source of the placer gold..”

One of the other sources referred to by Wilson might be mineralization of the Burney claims, located near the headwaters of Cañada del Oro, about four miles south of Oracle. These prospects had production from 1947-1967 along veins containing complex sulfide and oxide ore containing lead, silver, copper, zinc, gold, manganese, molybdenum, and tungsten.

It is likely that the source of the gold is many small veins widely scattered in the mountains, unless…

The presence of gold has inspired some stories of lost cities and buried treasure. One, the story of the Mine With The Iron Door, was a novel written in 1923 by Harold Bell Wright. This story was made into a movie in 1924 and has had several remakes including “MacKenna’s Gold” according to one source, but others disagree. One version of the story is that Jesuit priests were mining gold in the Santa Catalina Mountains but were forced to leave. They buried their gold in an old mine and secured it with an iron door. They never came back, and the mine with the iron door has never been found. More on the legend here.

There apparently was at least one real “lost city.” Recently archaeologists found a 3,000 year old encampment at the confluence of the Cañada del Oro, Rillito Creek, and Santa Cruz Rivers that, they say, provides a “a glimpse into the transition from roaming bands of hunters and foragers to a society of skilled farmers.” “What most excited researchers working at the site was evidence that the people who once inhabited the area had created a system of canals. The early engineers found they could maximize their agricultural output by diverting the water flow from the Santa Cruz to adjacent fields.” See the rest of that story here.

So, ADI folks, are you ready to try your luck panning for gold?