A Barn owl (Tyto alba) is a denizen of the night who stalks his prey by sound and stealth. He may have passed you close by but you didn’t notice, or maybe you felt a brief ghostly presence. On silent wings, the Barn owl can hunt in almost complete darkness, relying only on the faint sounds made by his intended meal. Fringe-like feathers on the leading edge of the wings help make the flight silent. I enjoy handling and interpreting these birds at the Arizona-Sonora Desert Museum. 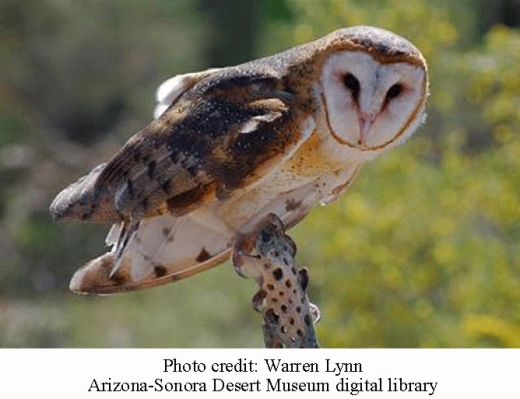 The barn owl is a very adaptable bird of prey that is found in specific habitats on all continents except Antarctica. It is the most widely distributed land bird. Barn owls eat rodents, and perhaps because we humans attract such beasties, barn owls favor nesting near human habitation in barns, under bridges, in mine shafts, and in palm trees. In the southwest, barn owls also nest in undercuts in arroyos, and may be found in desert grasslands, and in trees around agricultural fields.

Barn owls often swallow their prey whole, but they can’t digest fur and bone, so they regurgitate pellets. (Dissection of pellets allows researchers to study what the owls eat.)

Barn owls are sexually dimorphic, that is, the males and females have differing plumage. The females tend to be bigger, darker, and more speckled than the males. The birds average about 12 inches in body length and have wingspans of about 33 inches. Weights in adults vary from 10 to 20 ounces.

The feathers form a facial disk designed to focus sound to the owl’s ears. The ears themselves are not symmetrical on the skull as in other animals. Rather the left ear points downward, and the right ear points upward. Therefore, sound reaches each ear at slightly different times and allows the owl to exactly pinpoint the source. Some researchers claim that each ear hears with slightly different frequency sensitivity. That also aides in sound location. Barn owls are smart and learn all the squeaks and twitters of their prey so that they can identify not only where it is, but also what it is. Perhaps the only rodent with equally good hearing is the Kangaroo Rat.

Birds have four toes or talons. They are configured either three in front – one in back, or two and two. The barn owl can move its outer toes to form both configurations. That enables the owl to form a good web-like trap when snatching prey. The barn owl has serrations on the claw of the middle toe to aid grooming.

Barn owls have many vocalizations, some researchers count as many as 15 distinct calls as well as tongue clicking and wing clapping. Some of the sounds are for proclamation of territory, others are for alarm, and some are for courtship and mating rituals. Many of the sounds are screaming or screeching; others include hissing or wheezing, and whistling. None of the sounds are what we would call an owl hoot.

Nesting occurs in the spring in most areas, but can occur any time of year if there is abundant prey available. The female may lay up to six eggs each one to two days apart. Incubation takes 33 days and the young hatch one to two days apart. If the parents don’t provide enough food, the older chicks starve out and may even consume the younger chicks. The chicks will fledge seven to eight weeks after hatching. Barn owls typically breed at an age of one year, and there is a high mortality rate in the wild. Typical wild life expectancy is 2 years, but captive birds have lived into their high teens.

Barn owls are difficult to observe in the wild because of their nocturnal habits. I have seen them sleeping in mine shafts. If you want to seem them close up, go out to the Arizona-Sonora Desert Museum where Docents frequently have them on display. To see more photos, check ASDM’s digital library here.