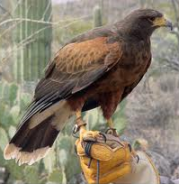 I volunteer as a Docent at the Arizona-Sonora Desert Museum. In that capacity, I get to play with and interpret some awesome animals including Harris’s Hawks, sometimes called the wolves of the air.

The Harris’ Hawk (Parabuteo unicinctus) is now a common urban dweller. Its body is chocolate brown above and below and it has conspicuous rusty shoulder patches, leggings and wing linings. The base and tip of the tail are white. It is slimmer and longer-tailed than most Hawks (buteos).

Males and females exhibit the same plumage, but the females are up to 40% larger. Weights range from two to three pounds for adults. This size difference is common in birds of prey. And it means that the female is the alpha bird of the flock.

The Harris’ Hawk originated in Central and South America and moved north following riparian corridors. It was not common in the desert in the first part of the 20th Century. Beginning in the 1930s, however, cattle ranching and associated water holes were developed, and the hawk was able to extend it range into the desert away from riparian areas. Since the 1980s, the Harris’ Hawk has moved into the city of Tucson in a large way because of development. It apparently thrives in suburban environments, but has yet to learn about electric lines. Electrocution is its largest cause of death in the city.

Harris’ Hawks of the Sonoran desert region are apparently a different subspecies from those in other areas. Our hawks are bigger and live in cooperative packs for both hunting and breeding. Harris’ Hawks in other areas nest and hunt in pairs. The pack is led by an alpha female. Several females may lay 2 to 4 eggs in a single nest. The eggs are incubated for 33-36 days by both sexes. The young fledge about 38 days after hatching. In Arizona, the breeding period is typically from February through October. If hunting is good, they may raise more than one brood per year. The hawks favor saguaros and tall trees such as eucalyptus and ornamental pines or cedar for nesting. Immature hawks may stay with the pack for up to two years, but eventually leave to find other packs.

Harris’ Hawks eat lizards, rabbits, rodents and small birds including doves and quail. They do not take snakes nor do they attack cats or dogs. They have been observed taking Koi fish. In the Southwest, the predominant prey is the desert cottontail rabbit. The hawk’s eyesight is so good, it can spot a rabbit up to a mile away.

The Harris’ Hawk is a very adaptive bird. In hunting, the younger birds may flush the prey while the older birds keep watch from a high perch, and then swoop down on the fleeing animal. Another strategy used is tag-team chasing. This is used for large prey such as jackrabbits. The hawks will tire out the jackrabbit until it becomes easy pickings.

To feed nestlings, prey is passed up the hierarchical chain of command to the alpha female, who feeds the young.

The Great Horned Owl is the hawk’s greatest natural enemy. The owl attacks nestlings and young hawks and can take an adult male, but not the larger adult female. Great Horned Owls, frequently appropriate hawk nests as their own. This means that the hawks frequently have to build several nests in an area. Packs of hawks will attempt to drive owls from the area.

Harris’ Hawks are territorial and will defend their territory against others of their species. However, in the winter, local flocks get together and the young females form new alliances to begin new flocks.

The Arizona-Sonora Desert Museum maintains a breeding flock of Harris’ Hawks. These birds perform in the afternoon free flight program from late October through mid-April (it’s too hot during the summer). You can see some videos here and more images here. All during the year, Docents at the museum demonstrate Harris’ hawks and other birds of prey.