There are three common squirrels in the Arizona-Sonoran Desert: the rock squirrel, the round-tailed ground squirrel, and Harris’ antelope ground squirrel. I happen to have all three in my yard, although Harris’ is just an occasional visitor. 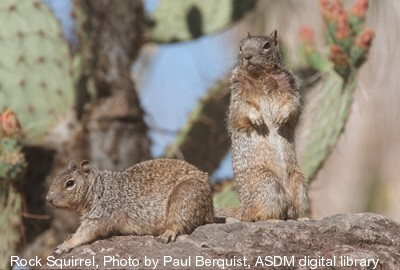 The rock squirrel (Spermophilus variegatus) is the largest of the three, up to 1.5 pounds. It resembles eastern tree squirrels. This squirrel is grey with reddish to brownish tinge, usually on its back. It has a large bushy tail. Rock squirrels are found in many habitats, except for the driest part of the desert. They are true omnivores feeding on seeds, mesquite beans, insects, eggs, birds, carrion, as well as cactus fruit.

I have seen them kill and eat snakes, even rattlesnakes. One day last year, as I was interpreting the Saguaro kit at the Arizona-Sonora Desert Museum, a small drama was taking place just below the Vista Ramada. A rattlesnake was being attacked by two ground squirrels. Professional museum staff had to rescue the snake, only because it posed a hazard to visitors.

Upon encountering a snake, a rock squirrel will stamp its feet and wave its tail from side to side while facing the snake. It also tries to flick sand or dirt in the snake’s face with its front paws. This behavior is called mobbing. Researchers in California note that rock squirrels can distinguish between venomous and non-venomous snakes, and change their mobbing behavior accordingly. Apparently, adult rock squirrels can at least partially neutralize rattlesnake venom. Rattlesnakes have heat-sensing organs which can detect a difference in temperature as little as 0.01 F at one foot. There is some research that suggests that rock squirrels take advantage of this. The squirrel can pump extra blood into its tail to make the tail warmer than its body, thereby fooling the snake into striking at the tail rather than the body.

Rock squirrels dig burrows and may be colonial or solitary. They can be very territorial. They mate in early spring and produce a litter in March. Sometimes a second litter appears in August or September. The rock squirrel may become dormant, holed up in its burrow during cold times, but it is not known to hibernate. 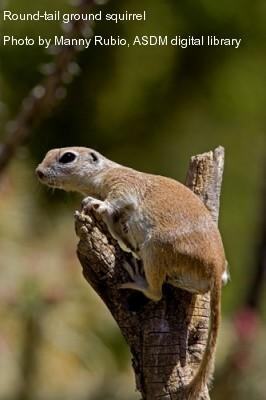 The round-tailed ground squirrel (Spermophilus tereticaudus) resembles a miniature prairie dog, and like them, is a very social animal that lives in small colonies. It is usually grey to beige with a long, black-tipped tail. Adults weigh 6- to 7 ounces. They inhabit valleys and alluvial fans. The round-tails are primarily herbivores, feeding on grass seed, cactus, and other nearby vegetation such as spring flowers, but they will eat carrion. They may sleep for a few weeks in summer until the monsoon arrives. The round-tailed ground squirrel hibernates in the winter. The round-tails are champion small miners. They may have an extensive tunnel network with multiple entrances. They, too, breed in early spring with pups born in March or April. The pups usually emerge with their mother by May.

The Harris’ antelope ground squirrel (Ammospermophilus harrisii) resembles a chipmunk, but it has a white stripe on its side that chipmunks lack (but chipmunks have white stripes on their faces). Also, chipmunks live at higher elevation, not on the desert floor. This squirrel seems to prefer rocky areas. The Harris’ antelope squirrel usually feeds on cactus fruit, seeds, and mesquite beans, but it will take insects and mice. They will climb a barrel cactus to get the fruit in spite of the spines. The Harris’ antelope squirrel is active all year. During hot days, it uses its busy tail to provide some shade. They dig burrows about three feet deep where conditions allow. 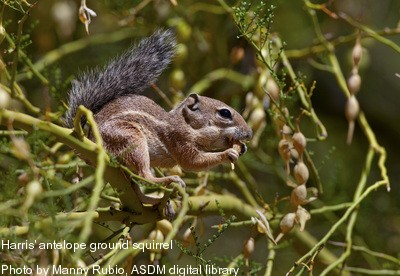 All three squirrels have sharp, strong claws used for digging. All three are diurnal; that is, they are most active during the daytime. They all have cheek pouches to store food as they gather it. These squirrels have a variety of vocalizations, some quite loud. You might mistake the sound for a bird call.