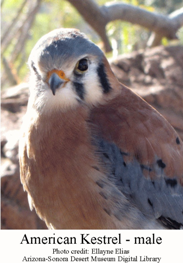 I volunteer as a Docent at the Arizona-Sonora Desert Museum. In that capacity, I get to handle and interpret birds of prey. I have previously written about the Harris’ Hawk (see link a bottom of this post) and will write in the future about Barn Owls and the Western Screech Owl, which I also handle. This week, I write about the American Kestrel, a very feisty little bird.

The American Kestrel (Falco sparverius) is the smallest falcon in North America. Males have bluish-gray on the head and wings and a rust-colored breast and back. Females have gray on the head only, and are generally speckled brown with dark bars. The body is about 10 inches long (females are larger) and its wingspan is less than two feet.

Kestrels feed on insects, lizards, small rodents, and other birds. They usually don’t pursue the prey, but wait on a perch to pounce on something that comes along. If no perches are available, the Kestrel can hover in the air and hit about 90 miles per hour in a dive.

Kestrels have sharp talons for seizing prey, but unlike hawks or eagles, falcons usually make a killing bite to the head or neck. A small triangular protrusion on each side of the upper bill, called a tomial tooth, is designed to slip between vertebrae and sever the spinal cord of the prey animal. 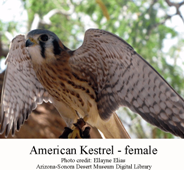 Kestrels occur throughout the Americas in appropriate habitat such as edges of forests or fields, deserts and grasslands, and in city suburbs. They are cavity nesters, so may be observed in saguaro holes, cavities in cliff faces, broken tree limbs, or cavities in structures. In the city and suburbs, they favor yards with bird feeders. I’ve seen Kestrels snatch sparrows off a bird feeder in my yard.

A pair of Kestrels will defend a territory against other Kestrels, but during the winter, males and females may defend separate territories. Courtship happens in the spring and couples frequently re-mate. Males typically display a series of dives and produce a “klee” sound over the nesting area. Observers note that Kestrels mate much more frequently than would be necessary for egg fertilization. Imagine that. Besides the “klee” call during mating, Kestrels use a shrill “kee kee kee” alarm sound and there is also a chittering sound used between a mated pair.

Kestrels generally produce one clutch per year with up to four eggs, each produced two-days apart. Incubation takes 30 days and the young chicks leave the nest after another 30 days. Life span in the wild is about 10 years, but some of the Kestrels at ASDM have lived into their twenties.

Besides normal binocular vision, falcons have telescopic peripheral vision apparently due to a dimple in their retinas which focuses light. They use peripheral vision to scan the sky for predators and to search for prey when flying.

American Kestrels used to be called sparrow hawks. There are other falcons called kestrels, such as the European kestrel, but they are generally larger than the American Kestrel.

To see more photos of Kestrels, go to the ASDM digital library here.