The Arizona Game & Fish Department has recently killed some aggressive javelinas in a Tucson neighborhood (see AZ Daily Star story and some commentary on ADI). For perspective on the incident, here are some notes on the natural history of javelinas. 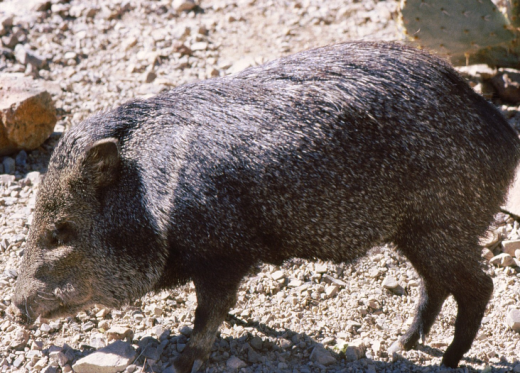 Javelinas, or collared peccaries, are a common sight in Tucson neighborhoods. They travel in herds and have large canine teeth which can do much damage to you. Javelinas have poor eyesight but good hearing and a keen sense of smell. Because of the poor eyesight, it is possible to get quite close to a wild javelina unnoticed but if the wind shifts, you may become the center of attention. A javelina may attack if it feels cornered. Clacking teeth is an alarm call and a warning. If you live in the foothills and attract javelinas to your yard by providing water and forage, you may also attract their predators – including mountain lions.

Javelina are herbivores. Their diet consists mainly of prickly pear cactus. They eat spines and all. Javelinas also eat other vegetable matter including fruit, seeds, roots, potted plants in your yard, and often overturn garbage cans in search of a meal. Javelina kidneys concentrate nitrogen wastes more efficiently than other animals so there is less water loss. The kidneys also filter out oxalic acid found in the cactus. (For more on that see Cactus water will make you sick, on ADI.) 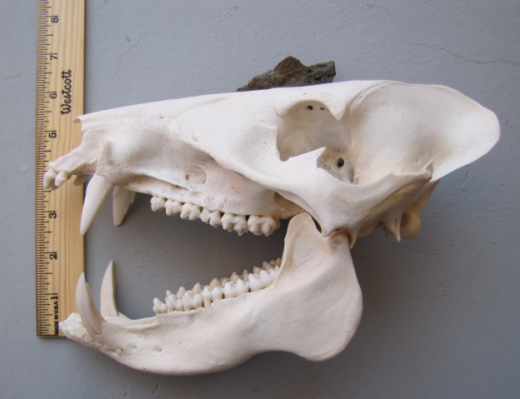 The main danger from javelinas is their large canine teeth that can do much damage to humans and their pets. Why does an herbivore have such big canine teeth? These big teeth serve three purposes. The most obvious is defense. These large canine teeth can inflict serious injury. The large teeth also are used to shred cactus pads. Lastly, the canine teeth help stabilize the jaw when the javelina is trying to crunch something very hard like a mesquite bean.

Javelinas stand about two feet tall and three feet long. Adults weigh 40- to 50 pounds. They are very social animals and travel in herds, usually with 10- to 15 members, but some herds with over 50 individuals have been seen. They keep track of herd members through smell. Javelinas have a scent gland above their tails and rub each other to transmit the family odor. They also mark their territories. Each herd is very territorial and will defend against other herds. Territory size depends on forage opportunities, but in the Tucson Mountains, it is estimated to be about 250 acres.

Javelinas are active at night during the summer, but in cooler seasons they may be about in the daytime. Mating may occur throughout the year and the newborns, called “reds” because of their color, are able to travel with the herd just a few hours after birth. They nurse for six to eight weeks.

Although javelinas look like pigs, they are not related. They belong to different families, Tayassuidae and Suidae respectively. Javelinas evolved in South America. Their current range extends from Arizona to Argentina, and the range is expanding northward. According to current classification, the two belong to the same superfamily but diverged about 30 million years ago.

Bottom line: you don’t have to fear javelinas; just be careful and don’t mess with them.

Other natural history articles on ADI: