An Associated Press article by AP’s chief climate alarmist, Seth Borenstein, was printed above the fold on the front page of the Arizona Daily Star, February 18, 2014, but deeply buried in the online version of the Star here. The article refers to a new paper: “Observational determination of albedo decrease caused by vanishing Arctic sea ice,” by Kristina Pistone, Ian Eisenman, and Veerabhadran Ramanathan. PNAS, www.pnas.org/cgi/doi/10.1073/pnas.1318201111.

A critical analysis of the paper is posted on the “Watts Up With That” blog (WUWT) here.

The paper in question makes two claims as stated in the title of this post:

1) The Arctic is getting darker because more ice is melting, thus decreasing the albedo or reflectivity of the Arctic. That claim is true.

2) That’s making the Earth warmer. That claim is false.

The researchers examined satellite sea ice data for the period 1979 to 2011 and show that sea ice has decreased during that period. They posit that less ice means more dark open water which absorbs more sunlight and therefore gets warmer.

The graph below from http://arctic.atmos.uiuc.edu/cryosphere/ shows the seasonal variation in Arctic sea ice area from 1979 through 2013. The blue lines show the earlier period and the pink or red lines show more recent time. The year 2013 is shown by the dark red line and is in the middle of the pack. 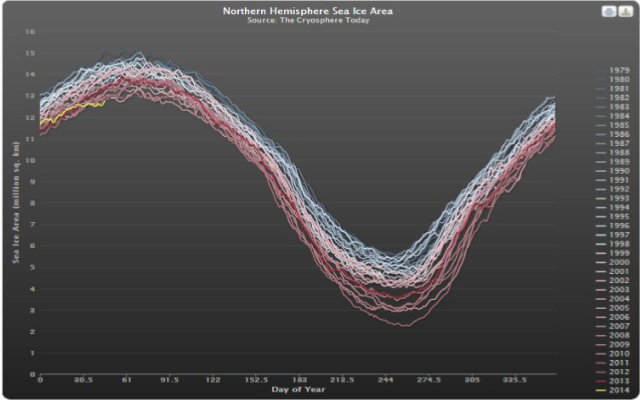 The analysis on WUWT agrees that less ice in the Arctic has decreased the albedo (reflectivity) by about 1.5 percent per decade. However, total planetary albedo has remained steady. This is because there have been more clouds in the tropics which have reflected back more sunlight. There is, therefore, no positive feedback as claimed and Earth is not getting warmer because of less ice in the Arctic.

This inconvenient fact was not mentioned in the AP/Star story and it was apparently ignored by the researchers. Another thing not mentioned is that 1979, when the major satellites were launched, happened to be a time when Arctic sea ice was at a maximum. Had the study begun in 1975, the picture would be much different because then, according to the IPCC, Arctic sea ice extent was even lower than it has been since. See graph below. 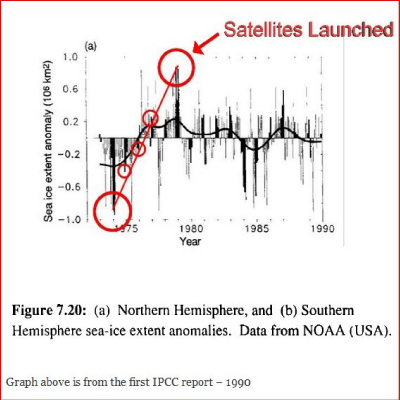 The Borenstein story contains the ominous sounding phrase: “… the entire Earth is absorbing more heat than expected…” Phrases such as that seem to be required in global warming alarmist stories. It’s always “more than expected” or “unprecedented.” What we should really be concerned about is that the projections of global temperature by climate scientists’ models are so wrong – because input assumptions are wrong, yet political policy is based on their erroneous assumptions. As Dr. Roy Spencer puts it, rather tongue-in-cheek, “95% of Climate Models Agree: The Observations Must be Wrong.” 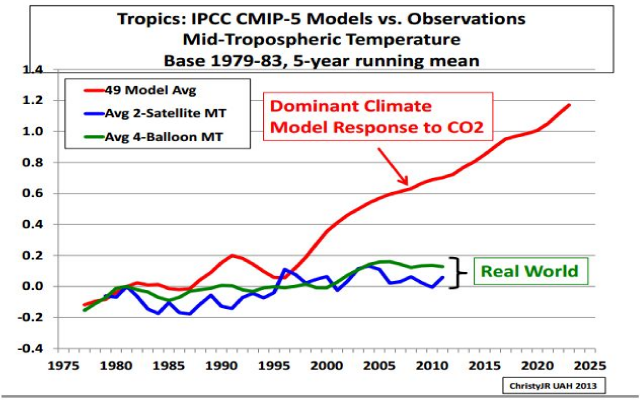