The spiny lizards are medium to large lizards up to 10 inches long. They have keeled, pointed scales that are usually a subdued gray or tan, a wide purple stripe down the back and scattered turquoise scales mixed with tan and brown on the back and sides. They also have a dark collar under and around the neck.

These lizards exhibit metachromatism, which means they change color depending on the temperature: generally with darker colors in cool temperatures. They also change color with the seasons and for mating.

The first photo shows a male in all his splendor during mating season with his blue belly and throat. 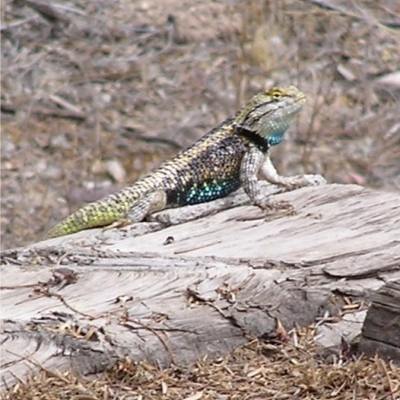 During mating season, the female develops a red, pink, or orange head. The second photo shows a female just beginning to develop the color. By the way, this particular female liked to climb on the rocks on my back porch. She became quite tame, and I could hand feed her June Bugs. I kept in mind that lizards have many sharp teeth. 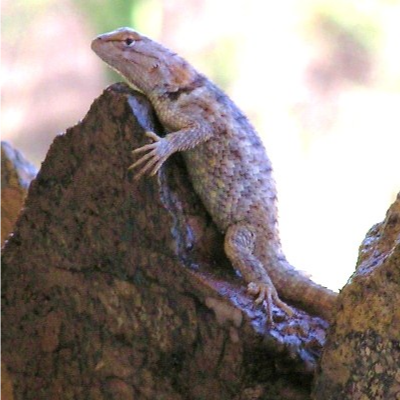 There are actually two species of spiny lizards common here: the Desert spiny lizard (Sceloporus magister) and the Clark spiny lizard (Sceloporus clarkii), the links will take you to the Arizona-Sonora Desert Museum digital library for many photos of each. I cannot tell them apart with confidence. I think, however, the Clark tends to have darker bands on it legs. Both species are primarily insect eaters. All the photos in this article were taken in my back yard.

The Desert Spiny occurs in six western states including almost all of Arizona, east to Texas and south to Sinaloa, Mexico; it is found from sea level to 5000 feet.

The Clark Spiny is found in central to southeastern Arizona, southwestern New Mexico, and south to northern Jalisco, Mexico, from sea level to around 6000 feet.

Both species are found mainly in desertscrub and thornscrub among rocks. The Clark Spiny prefers trees, but it is also found in rocky areas and may be found in oak woodlands and tropical deciduous forest and oak-pine forest in Chihuahua, Mexico.

The third photo shows a male on the left and female on the right. Notice that the female is missing her tail. 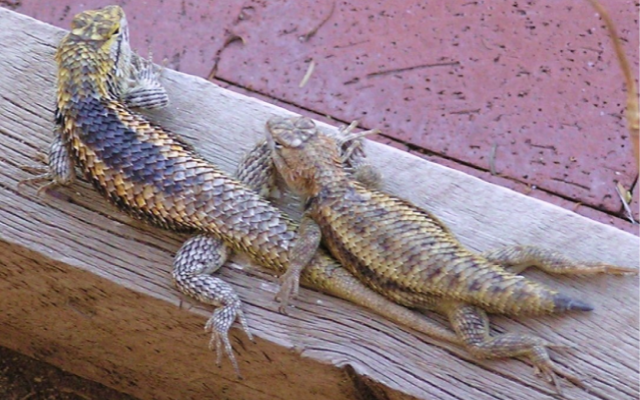 Many lizards have expendable tails that can be sacrificed to a predator if necessary. The wiggling detached tail will distract the predator and allow the lizard to escape. The ability to shed a tail is made possible by tiny fracture planes in the vertebrae which allows it to break easily. The lizard can help the split with muscular contractions when a predator grabs the tail. Blood vessels constrict quickly to minimize blood loss. The tail can regenerate over several weeks, but it is usually smaller and lighter colored. There is no bone regeneration; the new tail is supported by cartilage. If the original tail was only partly detached, a new one grows anyway, and you may see a double or triple-tailed lizard.

The spiny lizards lay four to twenty four eggs in the summer into early fall, which take 60 to 75 days to hatch. The lizards grow out of their skins and usually shed in patches rather than in one piece like a snake. The spiny lizards eat insects, other lizards, and some plant material such as leaves, berries, and flowers. They are preyed upon by snakes, coyotes, and birds of prey.

If you see one of these lizards, it may display by doing push-ups. This allows the lizard to get a better look at you, and it is also meant to intimidate you by making the lizard look bigger.

Craig Ivanyi, executive director of the Arizona-Sonora Desert Museum, tells a story about a lizard encounter:

Collared lizards can be quite pugnacious. In fact we had a male in one of our enclosures that routinely visited all other similar-sized lizards, just to make sure they knew exactly who was in charge.

When we introduced a male desert spiny lizard to this enclosure, the collared lizard quickly ran over to assert himself. However, once he was within a few inches of the spiny lizard, he seemed to realize how large this newcomer was. The two lizards took positions next to each other, bodies parallel, then sized up one another with sidelong glances. Eventually, they took off in opposite directions. Apparently, neither felt superior enough to press the issue.