Sunday I wrote about Saguaro Cactus Icon of the Sonoran Desert. Here is the rest of the story.

The large, multi-armed saguaros are the senior citizens of the cactus world. Saguaros are killed by being struck by lightning, blown over in a wind storm, and by people. But the largest cause of death is freezing and the effects of freezing may take several years to become evident.

Freezing weakens the cactus, making it more susceptible to infection. A healthy middle-aged saguaro can stand a few hours of temperatures as low as 10 degrees F in mid-winter. On the other hand, 12 hours of 20 degrees F in late fall causes damage and death. The first sign of trouble is dark scaly skin which cuts down on the cactus’ ability to carry on photosynthesis.

The chief agent of infection, a bacterium, Erwinia cacticida, is carried by the caterpillar of a moth. The bacterium causes rot upon which the caterpillar feeds. The rot turns the flesh of a weak saguaro into a smelly, black liquid. 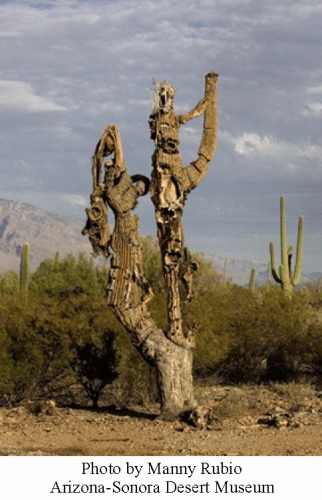 According to the Arizona-Sonora Desert Museum, a dying saguaro:

becomes an oasis to numerous insects and other arthropods, providing food, moisture, shaded habitat or an enticement for predators seeking live food…. Carve off a piece of tough outer skin of a decaying saguaro, and you’ll find the innards teeming with life. Move the whole saguaro, and spiders race from beneath it, escaping exposure to sunlight.

The sheer size of insect populations is always amazing. A small chunk of rotting saguaro (about 1 cubic foot) was examined at the University of Arizona; it yielded 413 individual arthropods, including adult and larval beetles, larval flies, pseudoscorpions, and mites. Compare that small portion to the size of a whole saguaro and you instantly understand why insects are this planet’s dominant life form.

A closer look at the fauna in a rotting saguaro will expose an ecosystem with grazers on fungi, such as the feather-winged beetles Acrotrichis and Nephanes, and such recyclers of plant matter as the flattened, leathery syrphid fly larvae Volucella, the neriid cactus fly maggots Odontoloxozus longicornis, and numerous phytophagous mites. This habitat is no longer solid plant material, but is now quite aquatic in nature. Several hydrophilid beetles, Agna capillata and Dactylosternum cacti, may be seen swimming awkward strokes through the muck. They feed on a wide assortment of organic material, from fungus and dead plant matter to castoff exoskeletons and dead insects. What better pond is there in the desert?

And what would an ecosystem be without predators? They swarm to this bountiful table in hordes—all sizes of rove and hister beetles, each staking claim to a prey size suitable to its mandibles. Most are colored red, so an observer may readily spot these hungry terrors of the bug world as they stalk their prey through the saguaro rot. One must be careful, however, when searching through this habitat, as another great predator of the desert, the scorpion, may be lurking in a hidden recess with its pinchers and sting at the ready. (Read more)

By the way, Hister beetles are used in forensic entomology to help determine time of death.

And, of course, there are spiders, snakes, lizards, and rodents waiting to prey upon the inhabitants of the rotting saguaro. High school biology teachers, why be satisfied with dissecting frogs when you could lead your class in dissecting a very aromatic and messy chunk of decaying saguaro that is teeming with life?

Besides bugs, there are also minerals produced by the decaying saguaro. A mature saguaro can contain as much as 200 pounds of the mineral weddellite (CaC2O4·2H2O) which, by the way, is the major ingredient of kidney stones.

According to Laurence Garvie (American Mineralogist, 2003):

“After the death of the saguaro, a series of minerals crystallize in the rotting flesh. These minerals form from elements released from the decay of the cactus by microorganisms and thus is a type of biologically induced mineralization. During the initial stages of decay, authigenic [formed in place] magnesium and calcium bearing minerals crystallize from elements released by the putrefying flesh and include lansfordite (MgCO3·5H2O), nesquehonite (MgCO3·3H2O), several polymorphs of MgC2O4·2H2O including glushinskite, monohydrocalcite (CaCO3·H2O), calcite, vaterite, and several unidentified Mg-bearing phases.”

There is much to learn, even from a dead saguaro.