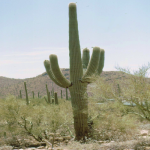 The saguaro cactus (Carnegiea gigantea) is the iconic plant of the Sonoran Desert. It ranges from southern Arizona to western Sonora, Mexico, restricted by rainfall and temperature (It is too dry in the Mojave desert and too cold most other places). Most saguaros flower and produce fruit during April, May, and June, but individual plants may bloom at other times of the year. I’ve seen one along Kinney Road flower in January.

Saguaros commonly reach 40 feet tall, a few reach 60 feet to 80 feet. Growth rate depends on rainfall and soil conditions. In Tucson, which averages 12 inches of rain per year, saguaros take about 10 years to get 2 inches high and 30 years to get 2 feet high. Arms may form when the saguaro is 50 to 100 years old and 7 to 12 feet high. Saguaros growing on sandy alluvial fans tend to be bigger and have more arms than plants growing on steep, rocky slopes. The saguaro has a central root that may extend two or three feet deep. Most of the roots are within 4 inches of the surface, ready to suck up water from a brief rainstorm. As a rule of thumb, roots extend outward at least as far as the saguaro is tall. That makes saguaros hard to transplant because it is difficult to dig out all the roots. 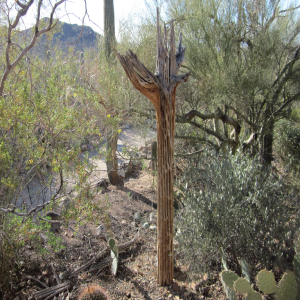 The saguaro is covered by a thick, waxy skin which makes it waterproof and restricts water loss through evapotranspiration almost exclusively to the stomates (pores for gas exchange). Water loss is further restricted by the metabolism of cacti and succulents. That metabolism is called CAM, which stands for Crassulacean acid metabolism. To avoid water loss, most pores are closed during the heat of the day. The pores open during the cooler nights allowing the cactus to take in carbon dioxide it needs for photosynthesis. But photosynthesis requires sunlight, so carbon dioxide is stored as an organic acid for use the next day, one of the things that makes the water in cactus not potable. This CAM metabolism allows the cactus to survive on about one-tenth the water compared to leafy plants, but the price is very slow growth. For a more detailed explanation on how CAM works, see this article..

Most of the tissue in a saguaro is for water storage. A fully hydrated saguaro is about 90 percent water by weight and a large plant can weigh 80 pounds per foot of height. This water-bearing tissue helps protect the cactus from temperature extremes. Heat is absorbed through the surface during the day and is stored, resulting in a small temperature rise that does not reach a lethal level. At night, the heat is slowly radiated back into the air. This same thermal inertia usually keeps the tissues above freezing on cold winter nights, but there are limits. The cactus would be in grave danger if the temperature stays below freezing for several days.

To support the soft tissue, the saguaro and other columnar cacti contain a cylinder of 13 to 20 woody ribs near the center of the cactus stem, running the length of the main stem and branching into the arms. In the upper part of the stem, the ribs are separate; as the stem ages the ribs continue to grow and fuse into a latticed cylinder. The outside of these woody ribs contain the vascular, or water transporting, part of the plant.

When looking across an expanse of desert containing many saguaros, one notices that there is not a continuous range of saguaro heights. Rather, there seems to be just a few “cohorts” of saguaro of similar heights. This happens because the seeds need several consecutive days with moist soil to germinate and these conditions do not occur every year. 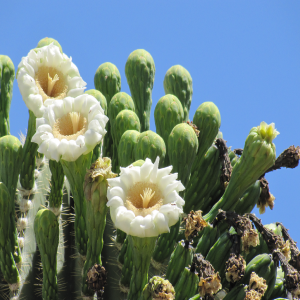 Flowers occur near the top of the main stem and on the tips of arms. The white flowers are about 3 inches in diameter and smell like ripe melon. Each flower opens at night and remains open until mid-afternoon the next day. Nectar produced at night attracts bats. A second batch of nectar is produced in the morning to attract birds and insects. Bats and white-winged doves are the main pollinators. Doves, Gila Woodpeckers, Cactus Wrens, and House finches eat the fruit and disperse the seeds.

After the flowers are pollinated and fruits mature, the fruit opens to expose its red interior leading some people to think there are red flowers atop the saguaro.

By the way, notice in the photos of saguaro fruit, the brown dried up flower. These contain a very sharp edge that can be used as a knife to open the fruit.

Many large saguaros contain holes excavated by Gila Woodpeckers and Gilded Flickers. The birds go in and down, removing the fleshy part of the cactus. The cactus produces scar tissue which quickly becomes very hard and impervious to bacterial infection. This material, often in the rough shape of a boot, survives after the cactus dies and rots away. Woodpeckers generally excavate a new hole each year, leaving the old hole for other cavity-nesting birds. Cactus spines deter animals from climbing the cactus. Apparently, however, they don’t deter snakes. I’ve seen photos of a gopher snake climbing a saguaro to prey on the dwellers in a hole.

Most saguaro seedlings die from drought, frost, and predation. Seedlings up to a foot tall are eaten by rodents and rabbits.

Some mature saguaros are killed by lightening strikes or blown over by high winds. However, the chief agent of mortality in the Arizona Upland is freezing. Mortality by freezing depends on the seasonal timing and duration. A healthy middle-aged saguaro can stand a few hours of temperatures as low as 10 degrees F in mid-winter. On the other hand, 12 hours of 20 degrees F in late fall causes damage and death.

According to Natural History of the Sonoran Desert, cited below, a frost-damaged saguaro may survive for another decade or longer, but eventually weakens until it can no longer resist infection. “Bacterial rot caused by Erwinia cacticida turns the flesh of weakened plants into an odoriferous black liquid.” Healthy saguaros can ward off small infections by walling off infected parts. The bacterium is carried by a moth whose maggot-like caterpillar burrows into the cactus and feeds on the rot it introduces. Many living saguaros have round, half-inch scabs on their surface. These are the caps of contorted tunnels left behind by the caterpillar.

Back in the 1990’s some biologists published a paper about the “brown decline” and impeding doom of saguaros. These scientists were unfamiliar with saguaro biology. There was a great freeze in December, 1978, which affected some of the old saguaros and this is what the visiting biologists focused on. They ignored the large population of smaller, younger saguaros.

For many generations the Tohono O’odham people have harvested saguaro fruit using long poles made of saguaro ribs. The fruit may be eaten raw or it may be cooked down to a sweet syrup. In the O’odham tradition, some of the syrup was fermented into wine used in a ceremony to herald in the summer monsoon. Dried seeds from the fruit, up to 5,000 per fruit, are rich in protein and fat and can be ground into meal.

Reference: A Natural History of the Sonoran Desert by Arizona-Sonora Desert Museum press.