The Creosote bush is a plant of extremes: it is a widely used medicinal plant; it is the most drought tolerant perennial in North America, and it may be the oldest living plant. 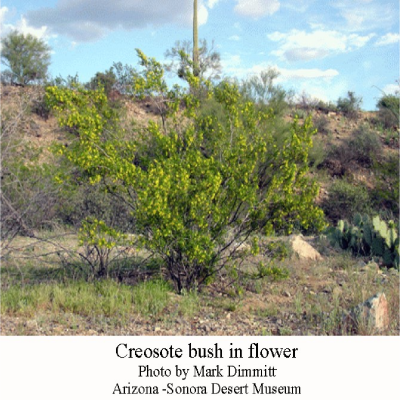 Creosote (Larrea tridentata), also known as greasewood, is the most common shrub in three of the four north American deserts. It is too cold in the Great Basin Desert of Nevada, but it thrives in the Mojave, Sonoran, and Chihuahuan deserts. Creosote is an evergreen shrub, commonly up to six feet tall or taller, that has tiny green leaves, yellow flowers, and grey-fuzzy fruit. It flowers several times a year depending on rainfall. 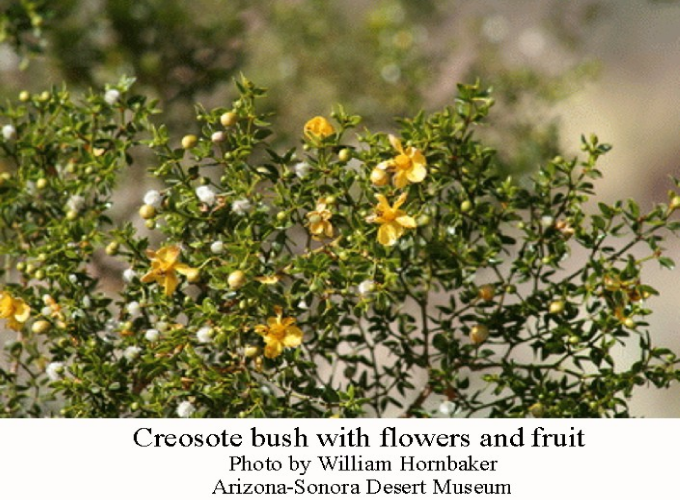 The leaves are shiny due to a waxy coating that prevents water loss. Rain, however, volatilizes that waxy coating which then produces a distinct, camphor-like odor, which some desert dwellers call the smell of rain. You can often experience the odor by cupping some leaves in your hands and blowing on them. There is enough moisture in your breath to volatilize the wax.

The creosote is the most drought-tolerant perennial plant in North America. Its hardiness can be seen as one travels from the relatively wet Tucson area to dry Yuma which averages about 2 inches of rain per year. Along that traverse, perennial plant species decrease from about 300 here to about 12 near Yuma. Going south along the Colorado River region, dry valleys contain only creosote and bursage, and in some places, even bursage disappears. The creosote can survive two years without rain. It may drop leaves and branches to preserve water and nutrients in the root crown.

There is a legend that creosotes inhibit growth of any other plants around them. Not exactly. The roots will excrete a substance which inhibits growth of bursage, its main competitor, and it will also inhibit germination of its own seeds so competing new creosote bushes will not grow nearby. But, the creosote is an important nurse plant for small cacti and many other plants.

Some creosote bushes in the Mojave Desert are thought to be about 11,000 years old based on carbon 14 dating. The branches of the plant will live several centuries and die out, but the root crown produces new branches in a ring around the original plant. With time, this ring expands outward as old branches die and new branches take their place, and eventually become separate bushes which are clones of the original seed. If the prevailing wind is especially strong, only the clones downwind of the parent plant will survive, forming a line of plants instead of an expanding ring. If you’ve ever tried to kill a creosote bush by cutting back the branches, you know that it will grow back within a few months.

The leaves of the plant apparently taste bad. Only the Jackrabbit is known to eat the leaves, and then, only when there is nothing else available. However, “More than 60 species of insects are associated with this plant, including 22 species of bees that feed only on its flowers. Many are specific to it, such as the creosote katydid (Insara covillei) and creosote grasshopper (Bootettix argentatus), which are so camouflaged that they are very difficult to find. Lac insects (Tachardiella larreae, a scale insect) can occasionally be found on its stems. Desert peoples used its sticky secretions as a multipurpose sealant and glue. Ball-shaped leafy galls are common on stems. They are produced by the creosote gall midge (Asphondylia); larvae of these small flies live in the protective mass of tissue. The Seri smoked the galls like tobacco.” (Dimmitt,2000).

Dimmitt also notes that the creosote bush “is the single most widely-used and frequently-employed medicinal herb in the Sonoran Desert. One of its medicinal names is chaparral tea, though it does not grow in Chaparral. The Food and Drug Administration has considered banning its sale based on a couple of deaths attributed to drinking it. But innumerable native peoples and some knowledgeable ethnobotanists drink large quantities of it for a wide variety of ailments with no detectable ill effect (other than gagging from its awful taste). Its antioxidant properties were used in foods and paints through the 1950s and are now being evaluated as anti-cancer agents.”

Various sources report that teas made from the leaves and small twigs cure fever, influenza, colds, upset stomach, gas, gout, arthritis, sinusitis, anemia, and fungus infections (CRC Ethnobotany, June 12, 1999). Creosote also has antimicrobial properties, making it a useful first aid antiseptic. It is also beneficial in the treatment of allergies, autoimmune diseases, and Premenstrual Syndrome (Moore, 1989, p.29). Creosote serves as an analgesic, antidiarrheal , diuretic, and emetic. Creosote can be used on the skin as a tincture or salve. There is some evidence that prolonged use (especially from creosote concentrated in tablet form), can cause liver or kidney damage.

Creosotes originated in South America where there are five species of Larrea. It is somewhat of a mystery how creosotes got here from South America since there is no suitable intervening habitat for thousands of miles.

And no, this is not the creosote used for wood preservation; that’s a petroleum product.

Dimmitt, Mark, 2000, in A Natural History of the Sonoran Desert, ASDM Press.

Army Veteran Loses Appeal Of Over 15 Year Sentence For $7,000 Theft