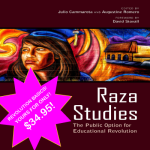 On Saturday, March 15, visitors to the Tucson Festival of Books will have the opportunity to hear from the great minds behind Tucson Unified School District’s Mexican American Studies creator and authors of Raza Studies: The Public Option for Educational Revolution, Augustine Romero and Julio Cammarota. Tucson tabloid journalist and Romero sycophant, Mari Herreras, will moderate the discussion.

Romero, and Cammarota, “will explore this progressive — indeed revolutionary educational movement,” according to the Tucson Book Festival’s website. The Festival, sponsored by the University of Arizona, is touting the MAS creation of Romero and Cammarota as “an equitable and excellent educational experience for Latino students.”

Contrary to the publicity, and Romero’s “research” which claimed that 98 percent of MAS students graduated, TUSD’s statistician did an unbiased analysis of the actual graduation rate, and found that less than less than 85 percent graduated. When TUSD did its own comparison of AIMS test scores, graduation rates, and college entrance they found no significant difference in the scores and results of Mexican-American students who took at least one MAS class and those who took none at all.

Even after the MAS program was closed by TUSD, the claims of success have been forwarded on ginned up studies conducted by more university professors, including Nolan Cabrera. An examination of Professor Cabrera’s study shows that the MAS sample had less than half the number of special education students in it than the control group. To make matters worse, in the earlier studies, Romero’s “research” included only students who had already reached the upper level high school grades and were already on a graduation trajectory.

Romero sells himself as a savior, and the middle-aged hipster Book Festival audience will likely eat up the prophet’s words just as they have in other venues. When the Phoenix Human Relations Commission hosted a brown-bag lunch featuring Romero to discuss the MAS classes, Romero told audience that he was “going to get spiritual” and asked their permission to do so. He told a long story about his career, outlining the struggles, and temptations. He concluded with his father’s words of encouragement to him during one of those struggles; “do you know what the apostles called Jesus? And I said No dad I don’t. And he said they called him teacher. And he said, ‘You know that is your legacy to the world. You have to uphold that legacy.”

The cult of personality is key to the movement to complete that radicalization of education; that, and burritos.

Romero also brags about the genius behind burritos. During an interview with Al Madrigal for Comedy Central’s the Daily Show, a TUSD Governing Board member became a national laughing stock when his comments about Romero’s burrito trick were edited to paint Hicks as a bigot, but Romero is proud of his burrito buys.

At the aforementioned human rights luncheon, Romero explained the role of burritos as educational tools. He told the salad grazing audience that he would bring burritos to the hungry students to “win them over.” Romero’s use of food to entice students has become a sticking point for traditional educators who believe that you should feed a student because they are hungry and not as an enticement. However, promises of burritos and extra credit have been welcome incentives for the children in the 8th poorest metropolitan area in the country.

The extra credit incentive drew many of the University’s students to join in the takeover of the TUSD Governing Board meeting in the Spring of 2011.

Romero, who orchestrated the conducted the takeover with the help notables including public defender Isabel Garcia and Pima County Supervisor Richard Elias, currently works in TUSD as director of the Department of Culturally Responsive Pedagogy and Instruction.

Cammarota, an Associate Professor at the University of Arizona, was on hand during the takeover. The tall man towered over the students with a watchful eye and big smile as they terrorized members of the public who had hoped to address the Board about a wide variety of mundane matters.

Cammarota and Romero have co-authored numerous articles. In their piece entitled, “A Critically Compassionate Intellectualism for Latina/o Students: Raising Voices Above the Silencing in Our Schools,” the duo praise the work of Paulo Freire and promote their own version of Critical Race Pedagogy. They write that teachers “who follow critically compassionate intellectualism implement the educational trilogy of Critical Pedagogy, authentic caring, and social justice centered curriculum.”

Cammarota completed a doctoral program at UC Berkeley’s Graduate School of Education in May of 2001. According to the University’s website, “Cammarota has also co-authored a seminal article on applying a social justice approach to youth development practices.”

Cammarota and Romero claim that for “students of color, critical pedagogy affords them the opportunity to be critical agents of social and structural transformation.” They praise Freire for his work on “banking education some 30 years ago” and say the banking practice is “so prevalent in our schools today. The primary assumption holds true. Teachers possess all the knowledge and their job is to fill the students’ supposedly blank minds with the state’s official perception and understanding of the world.”

According to the duo, their “goal was to help students raise their own voices above the silencing of traditional schooling. In addition we hoped that they would become active citizens armed with a critical consciousness that could lead them towards the transformation of educational and social structures presently failing to meet their needs.”

The presentation will be held from 10:00 am – 11:00 am. Following presentation, the duo can be found at the sales and signing area on the Koffler Patio.

The minds behind TUSD’s Multicultural classes