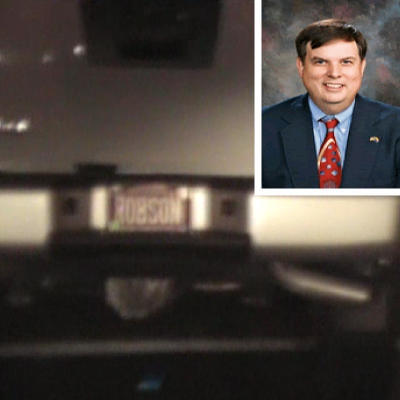 On Saturday night, August 9, 2014 at approximately 9:45 p.m. at Dobson and Warner Roads one Bob Robson, of the Robson/Dial get elected whatever the cost partnership, was out in force with an accomplice involved in a sign stealing caper and got caught.

Robson and Dial have been removing and destroying signs for about one month now. There have been in excess of 130 signs missing or destroyed. The signs in question are the public information signs that point out who voted for the Obamacare Expansion debacle thrust upon our state with the red “Arrow of Truth”. The arrows were pointed at the Robson Dial signs to inform the public of who it was in LD18 that did the dirty deed to Arizona and the AZGOP.

Robson was observed performing “Wheel Man” duties while his, still to be identified accomplice, jumped out of the truck to do his apparently well practiced technique of sign mutilation. Robson maneuvered the vehicle to pick up his henchman after he was seen throwing one sign into the bushes and the other into the garbage at Circle K.

Do to great camera work under somewhat difficult conditions, our stakeout man was able to get a video of the henchman and the vehicle that belongs to Robson make their escape, complete with the license plate lettered “ROBSON”.

The police reports have been written and the evidence has been collected. Now we all must do the right thing and expel these characterless individuals from our midst. These guys are supposed to be public officials with some manner of integrity. Not so! They must pay for the crimes [class II misdemeanors] and be punished by losing the up coming primary election.

There can be no more room in Arizona for politicians who prefer to work under the cover of darkness, and who will continue to be professional vote sellers to the best healed special interest groups.