In a earlier article, Avian mortality from solar farms, I featured the Ivanpah generating station, in the Mohave Desert southwest of Las Vegas, which uses 173,500 heliostats each with two mirrors to focus sunlight on three towers where water is converted to steam to generate electricity.  This method is called “solar-flux” and it generates very high temperatures. Birds experience traumatic impact with the mirrors, but the larger danger is getting singed by the heat flux which is up to 800 degrees F. 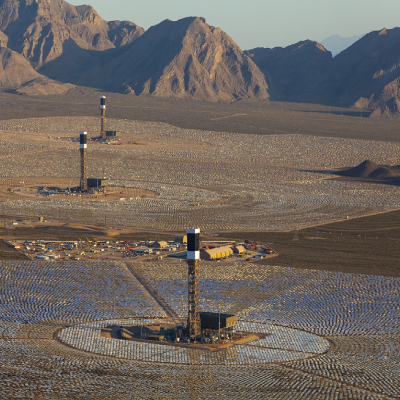 But since the sun doesn’t shine all the time, the plant uses natural gas to keep the water hot. And, apparently, there hasn’t been enough sun to do that.

Bright Source Energy, the company operating the plant, is petitioning the California government, requesting permission to burn more natural gas and to emit 94,749 more tons of carbon dioxide per year. That’s the equivalent of emissions from about 16,500 automobiles. (See full story at the Hockey Schtick)

If the permit is approved, then this “solar” plant will produce about 35 percent of its electricity from fossil fuels.

“The plant cost $2.2 billion and has a ‘gross capacity’ of 392 MW [but may actually perform at a much lower average capacity], thus a minimum cost of $5.64 million per MW capacity.

By comparison, a 650MW gas turbine power plant can be built for around $630 million and run 24/7/365 without requiring fossil-fuel back-up, a cost of $0.97 million per MW or about 6 times less. Since ~35% of the proposed plant output would be from fossil fuels, the solar maximum capacity would be ~255 MW, increasing the cost for the actual solar-derived energy to ~8.6 times higher than a conventional gas turbine power plant [which has much lower greenhouse & particulate emissions than firing boilers in the Ivanpah plant].”

Another problem with the facility is that airline pilots are complaining that they are being blinded by the glare from the mirrors (see, for example this Breitbart story).

As Kermit said, it is hard being green.