A press release from Pima County claims “Since last year’s survey, the number of Pima County residents who reported driving alone to work, school, shopping and for leisure trips dropped significantly, which resulted in more than 8 million miles not driven daily.” But that 8 million miles (every day) figure is statistically conflated from a very small sample. It also is dependent on the veracity of the respondents.

PDEQ Director Ursula Nelson said, “When you translate those miles not driven daily into air pollution savings, it amounts to about 264,000 pounds of air pollution kept from the air we all breathe.”

“In May and June, FMR Associates Inc. conducted an internet and telephone survey of 500 random Pima County households to analyze and track the overall effectiveness of the Pima County Department of Environmental Quality’s (PDEQ) Clean Air Program and reported actions taken to improve to air quality.” According to the FMR report (full study here):

“The Telephone interviews were distributed on the basis of geographic population density in the market, with specific steps taken to ensure a proportionate number of interviews in each survey region.” “Telephone respondents included in this survey were selected through a random sampling procedure that allows equal probability of selection.”

“Online surveys were conducted via the Internet utilizing a questionnaire administered by FMR Associates and hosted on the sgizmo.com website (with completed surveys downloaded directly to FMR for data processing and analysis). Respondents were contacted through a third party database Internet panel company that emailed invitations to their “opt in” panelists who reside in Pima County.”

Many of the survey questions were statements and the survey asked people whether or not they agreed with the statement. Here is a sample: “You are aware that the majority of our air pollution comes from motor vehicle use.” Statements such as this one give the survey characteristics of a push poll. (“The questions are skewed to one side of an issue or candidate, the goal being to sway large numbers of voters under the guise of survey research.”)

A total sample size of 500 responders out of a County population of about one million represents a very small sample size (about 0.05%). The answers given by those 500 are statistically conflated to arrive at the 8 million miles saved daily. FMR claims the sample size produces “statistically significant” results. I think both FMR and the County are fooling themselves and trying to fool us.

(See my Wryheat blog post: Statistical Significance in Science – how to game the system )

The FMR study did not present any evidence that decreased miles driven had any effect on air quality. I could not find such evidence from Pima County either.

The other criteria pollutants measured by PDEQ are nitrogen dioxide and sulfur dioxide. No significant changes in the levels of these two pollutants have been seen in the past 20 years.

Particulate matter concentrations are often higher near unpaved roads, during localized activities such as construction, during extended dry periods, and when strong winds are present. 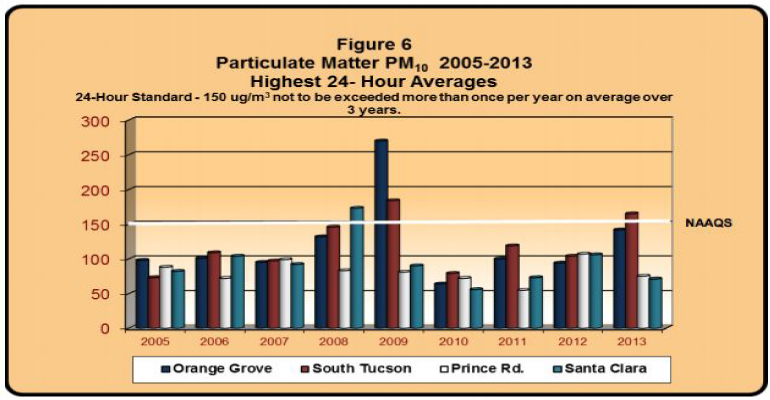 Pima County’s Department of Environmental Quality (PDEQ) has many important statutory duties but it also has many politically correct programs that don’t seem particularly effective. Perhaps that is why they need to tout stories like the subject of this post.

P.S. As a public service I note that PDEQ does not want you to use “stinky charcoal lighter fluid” on your barbie.