The National Association of Scholars (NAS) has released a critical study of the “sustainability” movement in our colleges. The report is titled “Sustainability – Higher Education’s New Fundamentalism.” This 260-page report may be downloaded as a whole or by chapter from http://www.nas.org/projects/sustainability_report.

NAS characterizes the movement as follows: “‘Sustainability’ is a key idea on college campuses in the United States and the rest of the Western world. To many, sustainability is just a new name for environmentalism. But the word has come to mean something much larger: an ideology that demands new limits on economic, political, and intellectual freedom as the price that must be paid to ensure the welfare of future generations. This report is the first in-depth critical examination of the sustainability movement in higher education.”

Before getting to the NAS report, here is some background on “sustainability” taken from an article on my WryHeat blog: 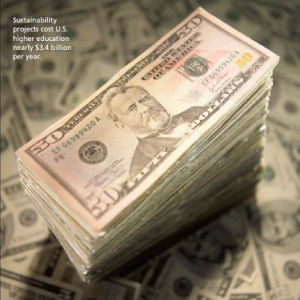 “Sustainable development” and “sustainability” have become mantras of environmentalists, the UN, federal, state, and local governments, and even some corporations that strive to be politically correct. The City of Tucson has an Office of Conservation and Sustainable Development. Perusal of that site shows that City bureaucrats and administrators have swallowed carbon-dioxide flavored Kool-Aid and sing Kumbaya to each other. Pima County has a “Sustainable Action Plan” that begins: “This plan represents a systematic approach to integrating the goals of sustainability into virtually all facets of the way Pima County government operates—from the cars we drive, to the energy and water we consume, to the construction of our buildings, to the products we purchase, to the way in which we view and handle our ‘used’ materials.”

Sustainable development (aka Agenda 21) has its origins in a United Nations program. Henry Lamb of Sovereignty International traces its history in an article in Canada Free Press:

Agenda 21 was developed over a period of time, traceable from the 1972 U.N. Conference on the Environment, which identified “environmental protection” as the world’s greatest problem, and gave the world the U.N. Environmental Programme, followed almost immediately by Nixon’s Executive Order that created the EPA.

Then came the 1976 U.N. Conference on Human Settlements, signed by the U.S., which proclaimed that “Public control of land use is…indispensable.” The next major step was the creation of the U.N. World Commission on Environment and Development in 1983, chaired by Gro Harlem Brundtland. The commission issued its final report in 1987, called Our Common Future. This document produced the concept and defined the term “Sustainable Development” to be: “Development that meets the needs of the present without compromising the ability of future generations to meet their own needs.”

This rather ambiguous definition was spelled out in great detail in a 40-chapter, 300-page document titled Agenda 21, signed and adopted by 179 nations in 1992 at the U.N. Conference on Environment and Development in Rio de Janeiro.

A document from that 1976 UN conference states: “Land…cannot be treated as an ordinary asset, controlled by individuals and subject to the pressures and inefficiencies of the market. Private land ownership is also a principal instrument of accumulation and concentration of wealth and therefore contributes to social injustice…”

To repeat the definition: “Sustainable development is development that meets the needs of the present without compromising the ability of future generations to meet their own needs.”

On the surface, that sounds all warm and fuzzy, perhaps even prudent. But below the surface we find impracticality and an assault on private property rights and liberty.

Sustainable development invariably involves giving some central authority control over the economy. The former Soviet Union is a good example of how badly that works.

The reason central planning doesn’t work is that we cannot know what the needs of future generations will be. The concept of sustainable development is actually one of arrogance.

Some excerpts from the executive summary and introduction of the NAS report:

“This report is the first in-depth critical study of the sustainability movement in higher education. The movement, of course, extends well beyond the college campus. It affects party politics, government bureaucracy, the energy industry, Hollywood, schools, and consumers. But the college campus is where the movement gets its voice of authority, and where it molds the views and commands the attention of young people.”

“We also examine the financial costs to colleges and universities in their efforts to achieve some of the movement’s goals. Often the movement presents its program as saving these institutions money. But we have found that American colleges and universities currently spend more than $3.4 billion per year pursuing their dreams of ‘sustainability’ at a time when college tuitions are soaring and 7.5 percent of recent college graduates are unemployed and another 46 percent underemployed. In addition to the direct costs of the movement, we examine the growing demands by sustainability advocates that colleges and universities divest their holdings in carbon-based energy companies without regard to forgone income or growth in their endowments. What makes ‘sustainability’ so important that institutions facing financial

distress are willing to prioritize spending on it? In this report, we examine that question.”

“To the unwary, ‘sustainability’ is the newer name for environmentalism. But the goals of the sustainability movement are different. They go far beyond ensuring clean air and water and protecting vulnerable plants and animals. As an ideology, sustainability takes aim at economic and political liberty. Sustainability pictures economic liberty as a combination of strip mining, industrial waste, and rampant pollution. It pictures political liberty as people voting to enjoy the present, heedless of what it will cost future generations. Sustainability’s alternative to economic liberty is a regime of far-reaching regulation that controls virtually every aspect of energy, industry, personal consumption, waste, food, and transportation. Sustainability’s alternative to political liberty is control vested in agencies and panels run by experts insulated from elections or other expressions of popular will.”

How pervasive is the “sustainability” movement? NAS reports:

“There are upwards of 50 professional bodies to serve the intellectual and career interests of sustainability experts. There are 1,438 sustainability-focused academic programs at 475 campuses in 65 states and provinces to credential those experts.”

“Hundreds of millions of dollars in private philanthropy have been channeled into sustainability research. Government agencies, too, have poured billions into academic research aligned with the sustainability movement’s agenda. The EPA alone has spent more than $333 million in the last 15 years sponsoring sustainability fellowships, predominantly for college and university professors, in addition to another $60 million in sustainability research grants. The National Oceanic and Atmospheric Administration records show more than $3 billion in grants for climate science research since 1998 (more than $89 million in 2014), while the National Institutes of Health has granted in the last four years alone $28 million for research on climate change and another $580 million on ‘Climate-Related Exposures and Conditions.’ The National Science Foundation records show more than $1.7 billion since 1998 in sustainability research grants. The National Endowment for the Arts invested $2 million over the same period. The disparity in date ranges available in government grant databases makes direct comparisons difficult. But these numbers indicate an average of $465 million in federal funding for sustainability and climate change research each year—though in recent years government funding for climate research has increased substantially.”

Could you think of some better use for those funds, time, and energy?

The NAS report concludes with 10 recommendations in the form of advice to colleges and universities to uphold with greater vigor their traditional standards.

https://arizonadailyindependent.com/2013/07/04/the-contract-with-america-how-our-constitution-came-to-be/Capitalism is not a zero sum game